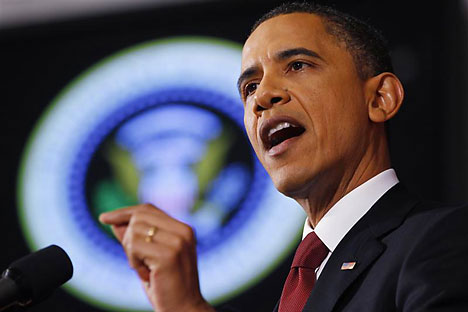 Obama’s plan to reduce imported oil consumption by one-third could bring down global oil prices to $10-20 per barrel.

The new energy initiative of US President Barack Obama could cause a severe blow to Russia’s export revenues, say national economists. Obama’s plan to reduce imported oil consumption by one-third could bring down global oil prices to $10-20 per barrel. This scenario could become a reality not only because the US plans to replace oil with other sources of energy, but also because Europe and China wish to do the same. However, it is too early for panic: America’s refusal to import oil could take 10 years to finalize. The only positive aspect for Russia in Obama’s new plan is the emergence of additional stimuli for modernization and diversification of the economy, say experts.

The shocks of the recent events in North Africa and the Middle East, as well as Japan, have forced the world’s leading economies to revisit their energy strategies. The world’s largest oil consumer – the US – plans to reduce its consumption of imported oil by one-third in the next 10 years. According to various assessments, the US has a share of 22% of the global oil consumption market.

“Today, I’m setting a new goal: one that is reasonable, achievable and necessary,” news agencies quoted Obama as saying. “When I was elected to this office, America imported 11 million barrels of oil a day.  By a little more than a decade from now, we will have cut that by one-third.”

The oil which will no longer be purchased from overseas will be replaced by the US with its own hydrocarbons. In particular, the Obama administration is actively supporting the development of subsea oil fields.

Obama is confident that the United States must think about the future of the country’s energy security – the US economy not only needs to overcome its dependence on imported oil, but also its dependence on oil in general. At the same time, due to the recent events in Japan, America does not want to fully rely on nuclear energy.

The Obama administration will work on active investment in alternative energy – geothermal, oil, and wind. And finally, the US has big hopes in natural gas.

“As of 2009, the US natural gas reserves have increased by 4.9% annually for the last five years, while the domestic consumption increased by only 0.4% annually in the same time period. It turns out that the US has excess supply of natural gas, which could also be used as an alternative to expensive oil,” stated Andrey Zakharov, a senior analyst at the financial company Ankorinvest.

One of the ways to reduce oil dependence is by switching to types of transport that could operate on the new sources of energy, and the US is working on solving this issue. But it is not alone. The European Union is actively discussing the concept of no longer using gas and diesel-powered vehicles, and a full transfer to electric-powered cars in the cities by 2050.

China also considers the development of electric-powered cars a priority for development. In October of last year, China’s Academy of Social Sciences published a Blue Book on the country’s competitiveness. The Chinese list of priorities and strategic objectives includes ecology and energy conservation, new energy, and cars that operate on new sources of energy.

“China is already actively promoting the use of alternative sources of energy and is now leading in the amount of investments into this sector, which amounted to $54.4 billion in 2010,” said Anton Usachev, a coordinator at the Russian Association of Solar Energy.

Economists are making assessments on how the US and European initiatives will impact the global oil markets as a whole and Russia’s economy in particular. And, according to their conclusions, it is quite possible that these consequences will be catastrophic.

“Europe and the United States are the biggest oil importers in the world. Daily, the countries receive about 19.5 millions of barrels of crude oil, which is half of the global import volume,” said Andrey Polishchuk, an oil and gas market analyst at BrokerCreditService. “Even a partial reduction of imported oil consumption will lead to a maximum collapse of the global oil prices to $10-20 per barrel.”

It is no secret that about 40% of the Russian budget comes from oil and gas revenues; therefore, $10 per barrel will kill the Russian economy, which is barely able to keep above water with the price at $100 per barrel.

“In the case of the countries’ mass refusal to use traditional energy resources, and in the case of major breakthroughs in this direction in the near future, Russia’s difficult-to-access oil and gas reserves will remain unclaimed. In particular, the Arctic shelf, which has lately been actively discussed, will remain unexploited,” said Aleksandr Shtok, department director at 2K Audit–Business Consulting/Morrison International.

Meanwhile, some experts have a more reserved assessment of the consequences of the US and EU’s changing energy priorities. They are pointing to the fact that, first, it is impossible to quickly transfer the industrial sector and the power economy to new sources of energy, and second, despite the announced priorities, China will not be able to avoid using oil, as this choice will result in a reduction of economic growth rates. Therefore, China could be one of the biggest consumers of Russia’s raw materials.

“In the projections made by energy agencies, China continues to be the leader in compensating for the reduced demand in the developed states,” noted Vitaly Gromadin, a senior analyst at Arbat Capital.

Gromadin recalled that gasoline and diesel fuel consumption is the primary factor in oil demand, but not the only one.

“There is a large number of ways to use petroleum products,” he said. “Heating oil is used to heat homes in the winter, oils are used for car engines. Petrochemical products include plastics, detergents, dyes, and rubber. Moreover, there are ways of reprocessing petroleum into dietary proteins. Therefore, completely avoiding the use of oil, even in a mass transfer to electric-powered cars, is impossible,” concluded the analyst.

In addition, experts have noted that, in theory at least, the refusal to use oil will not be only damaging to the Russian economy – in some ways, it may also be beneficial. The country will be forced to finally work on modernization and diversification, and not simply talk about it.

“In essence, a raw materials economy could significantly suffer from a decline in the US and European demand for oil. However, there is a positive nuance here as well – the process of reduction of oil demand could stimulate the development of Russia’s non-oil-and-gas business sector,” said Anton Vivchar, a department director at the Council of Power Producers. However, this process will clearly not be painless.