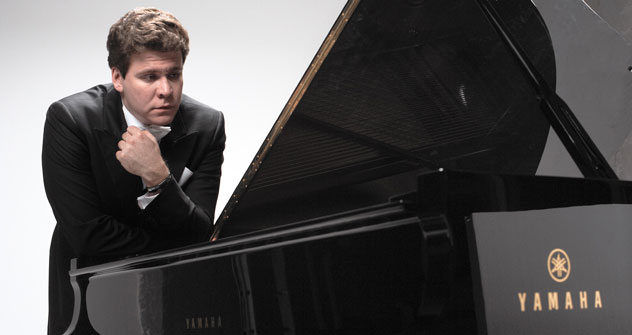 The pianist recalls life before the opening nights. As a young student he moved to a wet Moscow just after the 1991 putsch, when the stores were empty and there was total uncertainty.

Seated at an oak table in an English pub in downtown Moscow, the casually dressed Denis Matsuev is just as charismatic as he is in tailcoats at a concert grand piano.  But he also likes to micromanage: “Could you please turn down the music in this speaker so it doesn’t interfere with the recorder?” he asked the waitress. Matsuev, who is recording a new album, is even now concerned with sound quality.

We discuss his upcoming North American tour to Boston, Maryland, California and San Francisco. Matsuev is excited about getting back in front of an American audience. “I am always happy to play in the States. Walking onto the stage turns into a huge celebration.”

The 35-year-old pianist performs 160 concerts per year and cannot even remember how many albums he’s released – 18 or 19. Critics call him “a virtuoso in the grandest of Russian traditions» (the Gramophone), “the new Horowitz” (the Times) or sometimes even “a bear on stage” (la Scena Musicale), and he doesn’t seem to mind the latter.

The story of this global triumph began 33 years ago in the Siberian city of Irkutsk, when the 3-year-old Denis walked up to a piano for the first time, reached up to the keys, and still unable to see them, repeated the melody he had just heard from the weather forecast on television with a single finger.

“The atmosphere at home was entirely musical,” Matsuev recalled. “Mother taught at the pedagogical institute and the music school. Father, a pianist and composer, was head of the music section at the drama theater and also worked at a music school. We constantly listened to music, both on records and live – my parents played and had concerts at home.”

Matsuev is also proud that he managed to tear down all notions about what a wunderkind should be. “Sure, I have an amazing ear for music. I can pick up any song in a second and learn any sonata in a few days, but I’ve never practiced for ten hours. I was a totally normal boy – I played hockey, football and broke my arm a few times,” he added.

In fact, soccer (as it's called in the U.S.) almost interfered with the musician’s career. In April 1991, a  delegation from the New Names charitable foundation came to the city in search of young talent. But Matsuev, a student at the Irkustk music school, was in no hurry to take part in the auditions. The 14-year old was seriously training for the Irkutsk junior football team.

“I had an awful row with my parents about this,” Denis laughed. “They said, ‘Come on, go and play some prelude by Rachmaninoff... and then you can move on with your football.’ And they persuaded me in the end. I came to the audition still hot from practice and played for them. The people from New Names invited me to come to Moscow. But for some reason I didn’t take them seriously, said ‘sure, thank you very much’ and went back to kicking the ball around.”

Six months later, Matsuev came to Moscow at the foundation’s invitation to take part in the filming of a program on talented children called Morning Star. He also managed to pass an audition at the central music school. Only one week later, he was faced with a difficult choice.

“There were absolutely no prospects for a musician in Irkutsk. Moscow was the only chance not only to be recognized, but to simply perform concerts on stage. Moving, however, was a tragedy for me. It was 1991, a terribly wet and windy autumn, the August Coup had just occurred, the Soviet Union was falling apart before our eyes, the stores were empty, there was total uncertainty and fear, and all of a sudden somebody tells you that you need to move to Moscow from Irkutsk, where everything is familiar and you have your friends, school and girls. I didn’t understand why I needed to leave all this.”

But Matsuev cheered for the Moscow football club Spartak: “When my parents told me that we could go to football games in Moscow, it all changed for me.”

If you ask Matsuev what the secret to his success is, he immediately replies that 80 percent of the credit belongs to his parents. “Think about it, they left everything in Irkutsk and moved into a rented one-room apartment in Moscow, where they washed, cooked and practiced with me! Naturally, there was no guarantee at all that I would succeed – I simply came to study at the music school. This was true heroism. My grandmother secretly sold her apartment in Irkutsk and gave me $18,000 'to get settled.' We rented our apartment in Moscow with this money.”

The first thing Matsuev did was go see his favorite football team. For a time, he didn’t miss a single game if he was in Moscow. “When Spartak won its first championship in 1992, a crowd of fans broke through a police cordon and rushed onto the field to hoist up the players. I raced down onto the pitch with them and touched the goalposts. It was a moment of sheer happiness for me.”

But this was by no means the only emotional rush he experienced. Matsuev and his talented peers at the New Names foundation began to tour extensively. Matsuev performed at NATO headquarters, Buckingham Palace, the United Nations and Carnegie Hall. He also played for the Queen of England and the Pope. “That’s when I understood that music really could become my profession.”

Matsuev finally became convinced he could make a career of music after winning the International Tchaikovsky Competition in 1998. Among those congratulating the young winner was legendary British composer Andrew Lloyd Webber. Matsuev had already met him a few years earlier. “He sent me a fax saying,  'I had no doubts.'

Since 2008, he has chaired the New Names Foundation, which at one time opened the door to the stage for him, and now he’s the one helping young talents. Though he does seem concerned about the future of classical music. “The chances of a young talent making a name for himself are close to zero. It’s more profitable for managers to bring in someone well-known, select well-known pieces, sell out the house, collect the money and go home. There are very few people who are prepared to invest money in young people without knowing if they are going to lose it or not.”

Matsuev acts as an advocate for these young musicians. He organized the Crescendo Festival in 2005 and brought talented students to take part in it. “Many people said at the time that the Russian school [of music] was virtually dead, but we showed that wasn’t true..”

Following a concert in Paris a few years ago, Sergei Rachmaninoff’s grandson, Alexander, came to Matsuev's dressing room and suggested he perform some of the great composer’s unknown works. Rachmaninoff wrote the pieces while studying at the Moscow Conservatory and sent them to Tchaikovsky, whose secretary subsequently lost them. “I recorded them on Rachmaninoff’s grand piano at his French estate. The album was very successful and this is how our cooperation with the Rachmaninoff Foundation began... we have a project planned for 2012 with the Philadelphia Orchestra, with which Rachmaninoff made most of his recordings.”

Asked if he has any dreams left, Matsuev replied with gusto: “That this craziness never ends.”