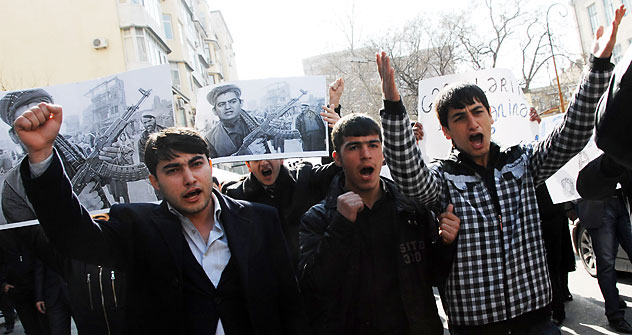 The potential political strengthening of Islamic radicals in the Middle East puts the Greater Caucasus, and especially Azerbaijan, in danger.

The year 2011 will likely go down in history as the year of the Middle East. Political turmoil in Tunisia, Egypt, Yemen and Syria and the new humanitarian intervention in Libya have put this part of the world in the global spotlight. As Russian political scientist Boris Makarenko duly noted, “politology has turned into Egyptology.” The countries of the South Caucasus are also taking a significant interest in the events in the Arab East, and this interest is twofold. On the one hand, the authorities and the opposition in Georgia, Armenia and Azerbaijan are considering what an Arab scenario could do to their own countries. On the other hand, the geopolitical consequences of the formation of a “new Middle East” are a cause for concern.

In March of 2011, the mass protests in Baku, organized by the opposition Musavat party and suppressed by the authorities, gave reason to believe that the “Arab spring” may be rolling over into the Caucasus. Meanwhile, Yerevan-based political scientist Alexander Iskandaryan rightly spoke of the fact that the “awakening” in Egypt, Libya or Tunisia should not be directly projected onto Caucasian states, because the conditions that laid the groundwork for the events in the Middle East in 2011 are different. “Exporting” these events to the countries of the South Caucasus (or to any other post-Soviet state for that matter) is hardly possible because dissatisfaction with this or that regime is not a contagious disease or a virus. In any given case there must be specific conditions and reasons behind mass protests. What kind of geopolitical changes the birth of a “new Middle East” will lead to is another question.

It is more or less clear that the year 2011 opened a new page in the history of Egypt, Tunisia, Libya and Bahrain. But who is going to write this page is not exactly clear. It is just obvious that it has little to do with European democracy and “victory over tyranny.”

A famous American Middle East scholar from the Center for Strategic and International Studies Edward Luttwak rightfully noted that unlike the United States, where the institutes are functional and a president’s resignation not so noticeable, a power vacuum is inadmissible in Middle Eastern countries because radicals and extremists may try to fill it in. In this sense, Muammar Gaddafi’s fantasy of al-Qaida’s presence in the ranks of his enemies does not look like the delusion of a disturbed mind. Undeniably, in Egypt, in Libya and in Syria the opponents of the current authorities are united in just one thing – rejecting secular dictatorial regimes (be it Hosni Mubarak, Muammar Gaddafi, or Bashar al-Asad Junior). These are not just Islamists, and their protest should not be linked to al-Qaida.

But at the same time, revolutionary scenarios often lead to the victory of marginal forces that are willing to do what it takes to achieve their goals. Let’s not forget that in Egypt, where, unlike Libya, violence was measured and power changed hands in a smoother way, there is no multiparty system, and the most structured and unified force is the “Muslim brotherhood,” which has for years been claiming that “Islam is the solution.” In neighboring Syria, in the event of the opposition’s military victory, it won’t be just the ruling Baas party that will be overthrown, but the entire political system that it is based on.

Thus the most serious danger that can emanate from the Middle East for the Caucasus is that this large area with a dense population plunges into chaos, or that the Islamic radicals become politically strong. In this sense, Zine Ben Ali’s or Mubarak’s departure, as well as Gaddafi’s and Asad’s potential resignations, spell significant uncertainty.

Azerbaijan is the most vulnerable to the strengthening of Islamic radicals in the Middle East. And although the authorities of this country are prepared to brutally suppress any such action (recall the recent series of arrests and detainments of activists from Azerbaijan’s Islamic Party), the question of the secular Azerbaijan’s self-identification in the Islamic world is real. The situation is aggravated by neighboring Iran’s reaction to the events in Egypt (during Mubarak’s tenure, Cairo and Tehran had no diplomatic relations). During a Friday prayer on February 4, the supreme leader (Rahbar) of Iran Ali Khamenei called Hosni Mubarak “Namubarak” (having no blessing). The new Iranian Foreign Minister Ali Akbar Salehi in his speech to the Parliament (Medzhlis) said that the Islamic Republic’s priority will be “strengthening ties with Asian states and creating a powerful block of Asian states on the international stage.” It should also be noted that Iran’s main geopolitical phobia with regard to the Caucasus is the involvement of “non-regional players.” According to Professor Seyed Javad Miri, “Iran is completely convinced that the Caucasus’ problems can only be solved by the countries in the regions, while the presence of non-regional players, such as Great Britain, China, the United States or Israel will only aggravate the situation.”

Meanwhile, Israel is an important strategic partner for Azerbaijan. The former director of Israel’s military intelligence Zeevi Farkash said that “forming a coalition with moderate Sunni states that surround Iran, which are also weary of the Iranian nuclear threat, is very important.” The cooling of relations between Ankara and Tel-Aviv will promote Israel’s interest in Baku. Meanwhile, inside Azerbaijan proper Islamic tendencies are intensifying for various reasons (here we should note the high level of corruption, the absence of an adequate secular opposition, disillusionment with the West and frustration over the loss of Karabakh and the neighboring districts.)

But neither Armenia nor Georgia should rejoice in the weakening of Azerbaijan in face of possible Islamization, because in the first case the frozen conflict over Nagorno-Karabakh might “unfreeze,” albeit with different slogans and a different ideology (and with wider international participation, by the way). In the case of the latter this would terminate Baku and Tbilisi’s strategic partnership, and seriously complicate the foreign policy and foreign economic actions of Georgia, already weakened by the events of 2008.

Thus the Middle East is entering a new period in its history that is full of new potential threats and explosions. It is less predictable than the region as we knew it before 2011. And this means that at any given point in time, the events there can unexpectedly influence other parts of the world, including the Greater Caucasus – a region where the new status quo, shaped by the events of August 2008, has not been fully established.

Sergei Markedonov is a visiting fellow at the Center for Strategic and International Studies (CSIS), Russia and Eurasia Program, Washington, DC.