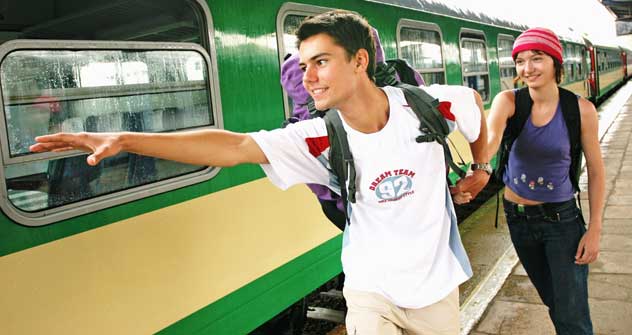 It’s clear that young Russians want to work outside of Russia, but how many of them will come back?

Anton, 25, has a close eye on his suitcase. Though already an economic manager at a major oil company’s Moscow headquarters – a position he admits it would take him years to reach in a Western country – he is considering taking a lesser-paying job or continuing his education in London. “Russia is just so depressing sometimes, especially in winter,” he said.

For many educated young Russians, Western countries seem to have an intractable allure, whether there are more work opportunities, a better educational system, or simply nicer weather. While this last reason may seem trivial, many students are beginning to wonder if the grass is literally greener on the other side.

“Each year, I ask my master’s students where they see themselves three or four years from now,” Moscow State University economics professor Alexander Auzan said at a conference in the Polytechnic Museum this year. “In September 2010 roughly half said they envisaged themselves working abroad: not just anywhere but quite specifically in Germany, Britain, Ireland, or Argentina.”

Uncomfortable truths are part of any world leader’s job, but few could have been more sobering than the one facing Russian president Dmitry Medvedev before his first G8 summit in July 2008. Just as he began his ambitious program of economic “modernization,” the white-collar professionals so crucial to it were prepared to jump ship—a staggering 57 percent of them, according to a Levada Center survey.

Medvedev’s response was characteristic of the optimistic Western-style rhetoric he has employed throughout his presidency. “We have to create favorable conditions for our citizens,” Medvedev said. “When there’s a lack of such conditions, people want to go somewhere else.”

But Russian professionals remain unconvinced. At least, that’s the conclusion it is possible to draw from the latest migration figures. More than 1.25 million Russians have left the country in the last few years, according to Audit Chamber head Sergei Stepashin. Emigration, combined with low birth rate and high mortality rate—average male life expectancy is 63—have contributed to a plummeting population. (Today there are about 143 million people living in Russia, a decrease of approximately 3.5 million overall since 2002.)

At first, this seems the latest in a long line of emigration waves stretching back to the October Revolution, when thousands of entrepreneurs and intellectuals fled Lenin’s Bolshevik government. Since then, Russians have left the country in droves whenever circumstances forced them. Some did so to avoid state-sponsored persecution, as during Stalin’s purges or the anti-religious campaigns in the 1960s and 1970s. Others, particularly in the last two decades of the Soviet Union, left in search of civil liberties in Europe, Israel and the United States. Most, however, did so in search of better material conditions, as with the “sausage emigration” that accompanied production shortages during perestroika, or the 6 million Russians who left in the turbulent 1990s.

It’s the relative absence of those force-majeure situations that worries so many about the current trend. Indeed, Russia is coming off a decade of unprecedented growth. Under Vladimir Putin, GDP increased six times, poverty was cut in half, and the economy rose at an average of 7 percent a year.

Instead, many liberal commentators see the change as something primarily atmospheric. “The systemic explanation for the [current] wave of emigration is the same one that Blok once gave for Pushkin’s death: not enough air,” journalist Dmitry Oreshkin wrote in a recent article for the opposition-minded newspaper “Novaya Gazeta.” “It’s harder and harder for a free, self-sufficient person to breathe in Putin’s Russia. There’s no place provided for him here.”

What remains to be seen is where that atmosphere comes from: In a poll accompanying Oreshkin’s article, 62.5 percent of “Novaya Gazeta” readers chose “all of the above” from a list of reasons explaining the increase in emigration. Most cases seem to depend on an individual’s personal issues: their line of work, their age, the languages they know, their family status, and their cultural images. LiveJournal, a blogging site enormously popular with Russians, has a community called “Time to go?” where users keen to emigrate seek advice from like-minded Russians.

However, some professionals have suggested that emigration makes it easier for those who stay to advance in their careers. Anna, 32, a senior curator at a major Moscow art institution, has apprenticed at several prestigious organizations in Europe, but ascribes her success to her return to Russia once and for all.

“Paradoxically, there are more possibilities for a career here, as long as you’ve got the desire to have a career,” she said. “The fact that leaving Russia for a period of time is unambiguously helpful, in terms of getting some fresh air, is another matter entirely – but then, in the majority of cases it’s worth coming back.”