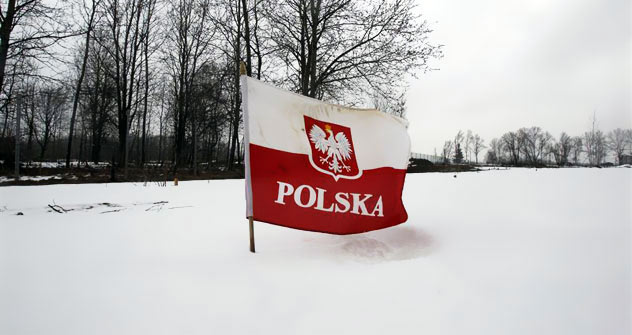 A Polish flag is stuck into the snow at the site of a plane crash that killed former Poland's President Lech Kaczynski and 95 others near the Russian city of Smolensk, April 10, 2011. Source: Reuters/Vostock photo

A year after much of the Polish political class died in a plane crash on Russian soil, relations between the countries have improved, but remain fragile.

One year ago, a plane crash in Smolensk ripped apart the seams of Poland’s political and military fabric. It is now clear that the raw emotional bonds created by the disaster have not been enough to propel Poland and Russia towards a lasting reconciliation.

Although vitriolic voices and anti-Russian conspiracy theories will no doubt once again come to the fore this week during the long chain of commemorations, they only represent a small—if noisy—minority. The sober manner in which the Polish regime and political institutions have dealt with the tragedy has confirmed Poland’s status as a modern, confident member of the European family. But that is not enough. If any remaining goodwill is not to be sluiced away, it is important that Poland knows it has a partner on the Russian side that is equally committed to a forward-looking relationship.

The death of the Polish president and 95 other high-profile Poles in the Smolensk disaster temporarily paralyzed Polish society. The widespread sense of loss and mourning will – briefly – be recreated for a few days as hundreds of thousands of people across Poland lay flowers and light candles in memory of those who were onboard the TU-154.

Poland’s violent history has given its citizens plenty of practice in the rituals of mourning. It is something that Poles young and old take seriously. But just as Poland’s political class managed to pick up the pieces and move on, so have most ordinary Poles. Opinion polls point to what might be termed Smolensk fatigue: A year on, only 13 percent of Poles view the plane crash as a “tragic event with special symbolic significance.” Seventy-eight percent of Poles find talking about the tragedy “boring, or irritating;” and, crucially, almost 90 percent of Poles think the saga has been exploited for political purposes.

So, the past year has demonstrated that many Poles have shunned a romanticized mythology of martyrdom in favor of a new, more pragmatic, modern patriotism. Poland’s current leadership has helped set the tone. Prime Minister Donald Tusk has repeatedly stressed that stirring up anti-Russian sentiment would do no one any good.

Despite Poland’s rejection of Russia’s report investigating the crash, Polish-Russian relations have been stable over the past year. Polish trade turnover with Russia reached $24 billion in 2010, up 40 percent from 2009. But Warsaw and Moscow remain far from a breakthrough.

What is missing, the Poles say, is increased openness and honesty on the Russian side. Referring to the Smolensk report, Prime Minister Tusk said the Russians are trying to cover up some aspects of the catastrophe not because of some dark secrets, but because they do not like to admit weaknesses.

Poles believe smothering the truth is ingrained in Russian political culture, but they admit progress has been made. Compared to the Soviet reaction following the explosion of the Chernobyl nuclear power plant 25 years ago this month, the Russian response to the Smolensk disaster has been astonishingly candid. Last week, the Russians handed over 11 volumes of declassified documents relating to the 1940 Katyn massacre of over 20,000 Polish officers. While long overdue, this is an important gesture.

But the Russians need to do more. If this centuries-long legacy of suspicion is to be overcome, then Russia must prove it can go beyond carefully choreographed moments of candor and goodwill.  It is not enough for President Dmitry Medvedev to tweet about modernization and Prime Minister Vladimir Putin to croon Blueberry Hill to a Hollywood audience. For Russia to become a truly modern state, it must come clean and increase transparency.

Russia should also act soon. With parliamentary elections in Poland being held this fall, Polish politicians will not want to seem to be in cahoots with Russia. The Law and Justice Party, led by the late president’s twin brother Jaroslaw Kaczynski, will no doubt once again try to rally voters with anti-Russian sentiment.  Of course, campaign politics will also be a factor in Russia. As the 2012 election campaign edges closer, President Medvedev will be intent on husbanding his ratings and holding his own against Putin.

As Poland eases its way into the EU Presidency this July it will more than ever before be steering EU policy towards Russia.  It is in Russia’s interest to reach out to Poland while the conditions are still right.

Philip Boyes is a speechwriter for a leading EU politician. He lives in Warsaw and is a Polish citizen.