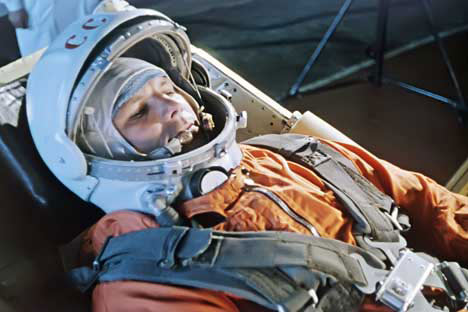 A new sculpture commemorating the first man in space will be unveiled in the British capital on July 14.

Early on the morning of Apr. 12, 1961, Yury Gagarin’s Vostok 1 capsule lifted off from the Soviet Union’s Baikonur Cosmodrome Site. Returning to earth 108 minutes later, Gagarin was instantly catapulted into the spotlight: His mission had earned him worldwide fame as the first man in space.

Now, as the world celebrates the 50th anniversary of Manned Space Flight, the British Council has announced its plans to celebrate Gagarin’s extraordinary mission by installing a 12-foot statue of him on the Mall in Central London.

The statue is a gift from the Russian Space Agency and is an exact replica of a monument that stands outside the Lubertsy Vocational School, where Gagarin studied between 1949 and 1951. It will be unveiled by Yelena Gagarina, the cosmonaut’s eldest daughter, on July 14—50 years to the day that Gagarin was formally welcomed to the UK by then-Prime Minister Harold MacMillan. The statue will remain on display in the British Council Plaza for an entire year.

London’s tribute to Gagarin will offer a rare glimpse of the cosmonaut’s human side. “I wanted to emphasize the man rather than the icon,” said Andrea Rose, the British Council’s director of visual arts. “Here Gagarin looks quite jaunty: he’s in an active pose, not standing in the Soviet statuary tradition.”

For Vernon Ellis, Chair of the British Council, the statue holds a special significance: “I remember the excitement in 1961 when we heard that Gagarin had successfully orbited the earth. Everyone was moved by the sheer bravery and adventure of his flight and through this statue we celebrate both that breakthrough for mankind and the UK-Russian relationship.”

Others have been quick to attribute symbolic meaning to London’s Gagarin monument. For British and Russian officials, the monument demonstrates a commitment to future cooperation and a belief in the maintenance of close UK-Russian ties. In the words of Vitaly Davydov, state secretary and deputy head of the Russian Space Agency Vitaly Davydov, both countries “have always been eager to travel to the unknown and to discover new space. Gagarin symbolizes this aspiration. It is very important for us to combine our efforts – intellectual, cultural, logistical and practical – to create a better planet for future generations everywhere.”

As part of a broader series of cultural events to mark the anniversary of Gagarin’s space flight, the British Council will also host an exhibition on the early years of the Soviet space program. Beginning on July 14 July, rare photographs of Gagarin borrowed from family members, original footage of training for the Vostok project and onboard equipment from the first manned space mission will all be shown for the first time in the UK.

Additionally, three British space enthusiasts have recently teamed up to publish a comic book entitled “Yuri’s Day: The Road To The Stars.” To make the subject of Gagarin’s voyage accessible to a foreign audience Andrew King, Piers Bizony and Peter Hodkinson set out to present the Soviet Union of the time “not as a wildly exotic and strange place, but as somewhere where people acted as they did for reasons that make sense to the reader.”

Despite drawing criticism from some quarters for misrepresenting the cosmonaut’s formative years, illustrator Andrew King has faith in the work’s overall effect. According to King, “The aim was to bring more attention to Soviet achievements that are still not fully understood in the West.”

“It’s fascinating to me that Gagarin’s achievement should have such worldwide significance,” said the British Council’s Andrea Rose. “Only yesterday I was reading that [Gagarin’s] voyage will be celebrated as far afield as Angola.”