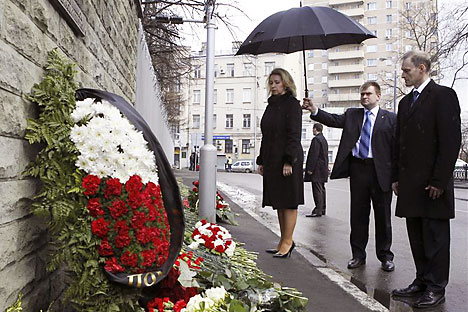 The anniversary this week of the tragic crash of Polish President’s Lech Kaczynski plane once again attracted attention to relations between Moscow and Warsaw. Alexander Gasyuk, Washington, DC correspondent for Rossiyskaya Gazeta and contributor to Russia Beyond the Headlines spoke to Zbigniew Brzezinski, former national security advisor to U.S. President Jimmy Carter, foreign policy expert and Polish-American, about where things stand one year after the crash.

The anniversary this week of the tragic crash of Polish President’s Lech Kaczynski plane once again attracted attention to relations between Moscow and Warsaw.  Alexander Gasyuk, Washington, DC correspondent for Rossiyskaya Gazeta and contributor to Russia Beyond the Headlines spoke to Zbigniew Brzezinski, former national security advisor to U.S. President Jimmy Carter, foreign policy expert and Polish-American, about where things stand one year after the crash.

Russia Beyond the Headlines: Apr. 10 marked one year since the terrible tragedy near Smolensk. Do you believe that Russia’s outreach after the plane crash was sincere? What was the impact of this tragic accident on overall relations between Moscow and Warsaw?

Zbigniew Brzezinski: I think that Russia’s outreach was more than an outreach. I think it was a spontaneous and genuine reaction of compassion and sympathy, which was very much appreciated by many people in Poland or by people like myself who have family connections to Poland, but who are obviously rooted in America. In that sense it was a very positive indication that some of the historically enduring hostility between Russians and Poles is beginning to wane on the Russian side and also on the Polish side. I must say that I personally was touched by it.

RBTH: Do you think that the Russian-Polish reconciliation process is irreversible?

Z.B.: No, I don’t. I think processes such as the ones that have been experienced by the French and the Germans or the Germans and the Poles were reversible, but fortunately both sides in those two cases persisted, were patient and in the end created a much more enduring and comprehensive reconciliation. This still is not yet the case between the Poles and the Russians, this reconciliation is still vulnerable and I think both sides ought to be cautious of that.

RBTH: Given the fact that relations between Russia and Poland have been poisoned for centuries, will two nations be able to move beyond this history?

Z.B: I think it is possible to move beyond that. But one has to be also cautious of the fact that reciprocal hostility is not necessarily the correct definition of the relationship at different stages of history. What I mean by that is that at certain stages of history, the hostility involved Polish supremacy, which led to occupation of Moscow, and that was centuries ago. In more recent centuries, it involves much more Russian supremacy and domination of Poland, including for example such horrible act as Katyn. So one has to be aware of the fact that the wounds are a little more sensitive still on the Polish side than on the Russian side. One also has to recognize that in any reconciliation there is some distinction, which should not be exaggerated in importance, but is a distinction nonetheless—between the stronger side and the weaker side. These realities have to be taken into account in the very difficult and psychologically complex process that reconciliation truly is.

RBTH: There are some fears that after the case of Smolensk plane crash is closed and out of the spotlight, Russian-Polish ties may worsen again. It’s not a secret that there are some countries that are uncomfortable with improving ties between Russia and Poland. What is your personal forecast on both the future of bilateral relations between Moscow and Warsaw and relations between the two countries in a broader European context?

Z.B.: I am cautiously optimistic on both accounts. I think there is some genuine momentum in the Polish-Russian reconciliation that should be maintained and can be maintained. And I do think that if it is maintained, the concerns some of the countries in the proximity of Poland and Russia will be relieved in the sense that they will see some genuine benefits for themselves.

RBTH: What role, if any, should the United States play to facilitate the normalization of the Polish-Russian relationship?

Z.B.: I think just be sympathetic, engage, try to reduce irritations that can surface on the one or the other side. Even in regards to the question of deployments of defensive missiles, Poles need to understand that this is not some sort of an alliance against Russia, and Russians need to understand that if it takes place, it is not going to be some threat to Russia. I think America can play a constructive role, but ultimate responsibility rests on the countries—and especially the two peoples—involved in this process.