Looking beyond the reset 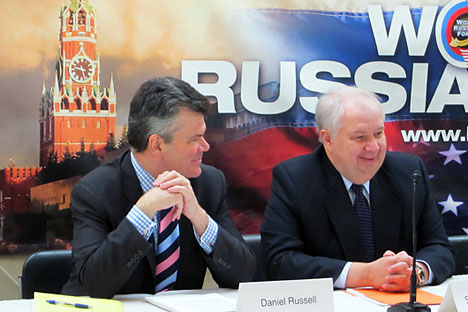 Now that the “reset” in U.S.-Russian relations has been deemed a success, what can be done to make sure the relationship does not stagnate?

Sometimes political projects are like children. You anxiously watch them; you worry about their future; you try to protect them from failure. And then, boom, you realize that they are grown up and you have to figure out what is next in your life.

The much-discussed “reset” in U.S.-Russia relations appears to be one such project. Announced by the Obama administration two years ago, the “reset” was carefully scrutinized by supporters and opponents alike. Its ability to repair badly damaged U.S.-Russia relations was far from assured; its failures – both real and insinuated – were often deliberately blown out of proportion. And then, all of sudden, the consensus is that we are already beyond “reset,” and a new, “post-reset” agenda for U.S.-Russia relations is needed.

The participants of the World Russian Forum—a gathering of political analysts, business leaders, journalists and civil activists from the United States and Russia that takes place each spring in Washington, DC—disagreed on many things. But there was at least one point that kept all of them in agreement: The reset works.

It is the reset that has to be credited with two major bilateral agreements: the new strategic nuclear arms reduction treaty (New START) and the civil nuclear cooperation agreement (the “123 Agreement). For the United States, the “reset” also ensured Russia’s cooperation on Iran’s nuclear program and Afghanistan, whereas for Russia, the reset paved the way for significant improvements in its relations with NATO and some of its member states, Poland in particular.

Equally important, the “reset” has changed the very tone of U.S.-Russia dialogue and created conditions for its further advancement. As pointed out by Robert Legvold, a prominent Russia expert from Columbia University, the reset can be considered a success if only because there are now expectations of further progress in U.S.-Russia relations. It is time now to view the reset not as an end in itself, but, rather, as a mean to advance an agenda in U.S.-Russia relations for the next 10-15 years.

To create such an agenda won’t be easy. The Cold War might be officially over, but fighting its ghosts is still a popular business on both sides. Although the emotional disdain many folks in Moscow harbor towards the notorious Jackson-Vanik amendment is understandable, focusing too much attention on its repeal is a distraction: A relic of the past that long outlived its usefulness, the amendment, as it legally stands, is completely irrelevant. Moreover, some analysts even argue that the emphasis on arms control—the principal topic of the Moscow-Washington dialogue in the Cold War era and since—distorts and, ultimately, slows down U.S.-Russia relations by shifting attention and energy from other critical issues. In this regard, it’s worth noting that the only think tank in Russia that is fully devoted to the topic of U.S.-Russia relations, the Institute for the U.S. and Canadian Studies, specializes precisely in the area of arms control. Russia would definitely benefit from developing additional, more diverse, intellectual resources to deal with the whole spectrum of relations.

Currently, two topics dominate the U.S.-Russia agenda: Russia’s accession to the WTO and the architecture of European anti-missile defense.

While, again, Moscow’s frustration over the seemingly endless process of its WTO negotiations with Washington is understandable, the issue of WTO accession, completely tactical in nature, should not deflect attention from a much more serious problem: the anemic state of U.S.-Russia economic and trade cooperation. Any future strategic discussion must focus on what prevents both countries from investing in each other’s economies (beyond the current meager $7-8 billion per year) or diversifying their trade (beyond energy and metal industry sectors). The importance of the economic component of U.S.-Russia relations is impossible to overestimate. In fact, until and unless the relations are based on a solid economic foundation, there will always be a chance that a “bad” event could throw them back to a “pre-reset” misery.

At the moment, the best candidate for such a “bad” event is a collapse of Russia-NATO negotiations over European missile defense. True, the disagreements between the two sides are fundamental in nature. Yet, it is also true that today no one expects the negotiating parties to agree on every minute, technical aspect of the future ABM system. What is really needed is a political decision to cooperate, a decision that can be formulated in language that would be palatable to domestic hawks on both sides of the Atlantic. This is doable, and this must be done, for the cost of not doing so will be too high for both countries to sustain.

The difficulties in formulating an agenda for long-term cooperation between Russia and the United States are also exacerbated by the uncertainty caused by the approaching election season in both countries. Inevitably, domestic concerns will consume both presidents gearing up for re-election, which will leave them with less time and desire to tackle complicated foreign policy issues. And considering how much the current positive tone in the bilateral relationship relies on good personal rapport between Barack Obama and Dmitry Medvedev, the question of what happens after 2012 can by itself put the brakes on the progress of any forward-looking deliberations.

And this highlights yet another shortcoming in the current structure of U.S.-Russia relations: its heavy reliance on government-to-government contacts. In order to ensure long-term stability in the relationship, the Russian-American dialogue must be spread in all directions, starting at the very top and extending to business-to-business, civil society-to-civil society and person-to-person levels.

Here, the topic of anti-Americanism in Russia and Russophobia in the United States can’t be ignored. Both track their roots to the legacy of the Cold War and both have designated cheerleaders among hardliners at home. Neither can be uprooted without a conscious, steady effort of enlightened elites. Some recent developments give reason for cautious optimism in this area. Addressing the participants of the World Russian Forum, Ambassador William Courtney—former U.S. Ambassador to Kazakhstan and Georgia—presented the idea of creating a Russia Society, an organization with a stated goal of promoting understanding of Russia in the United States. Equally promising is the creation—by a group of liberally-minded Russian politician and civil activists—of a Center for U.S.-Russian Rapprochement, whose mission is to eradicate the rampant anti-Americanism penetrating the Russian society.

Yet another long-overdue move that Russia should make to improve its relationship with the United States is to begin promoting its interests in Washington using professional lobbyists. A functional pro-Russian lobby could be able to insulate U.S.-Russia relations from frequently changing political configuration in Washington, be it at the White House or in Congress. At the very least, Russia must show to its American partners that it understands the rules of the game that is being played in Washington. Wins will follow.