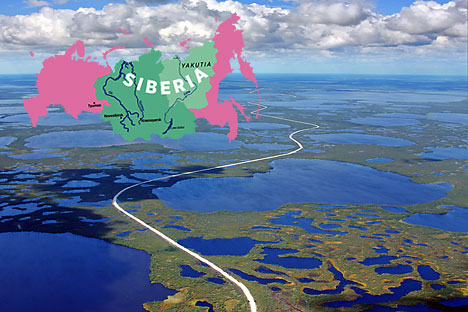 In the very heart of Siberia is the Great Vasyugan Bog — the largest bog on Earth.Source: Lori LegionMedia

Siberia, potentially the richest region in this planet, is now seeking closer economic ties with the dynamic Asia-Pacific region.

Recent demographic statistics for Siberia revealed a disturbing trend. When asked to state their nationality for the census at the end of 2010, a striking number of residents of large Siberian cities — Tyumen, Omsk, Novosibirsk, Kemerov, Krasnoyarsk, Irkutsk and Yakutsk — said that they were not Russian, not Ukrainian or even Tatar, but “Siberian”.

“I consider myself a Siberian,” the Krasnoyarsk blogger Alexander Konovalev, creator of the Internet-action group WE’RE SIBERIANS! told Russian Reporter magazine. “ I’ve traveled a lot around Russia and know that we’re different. I actually think that we don’t know who Russians are. Under the Soviet rule, we lost the Russian culture and became “the Soviet people”.

“Today, a Russian is a kind of abstraction. A Siberian is more concrete. When I lived in India, people often asked me, ‘Why I didn’t look like the other Russians who were there?’ And it was simpler for me to explain that I was a Siberian while they were Muscovites. Then the Indians understood.”

Since the beginning of the crisis-ridden 1990s in Siberia, a second generation has grown up that has never been to Moscow, never heard anything good about the capital and indeed has only a vague idea of what goes on west of the Urals. Connectivity remains a major hurdle: to fly from the center of Siberia (Krasnoyarsk, Novosibirsk) to Moscow takes about five hours, and tickets range from $400 to $500.

In the opinion of Dmitry Petrov, managing partner of the marketing agency B-52 (Novosibirsk), Russia’s “raw-material curse” is twice as bad for Siberia, the richest resource-rich territory on this planet. “Most of our regions are connected with the mining industry. For Siberia, the future depends on modernisation and transition from a mining economy to an economy of innovation. Without this, any development will be impossible.”

“Siberia’s natural resources are perhaps richer than any other regions in the world. We have 80% of Russia’s coal and gas, 70% of the oil, copper and nickel, and 99% of all platinic metals (palladium, gold, silver),” said academic Alexander Aseyev.

Western Siberia, located between the Ural Mountains and the Yenisei River, is home to more than half of all of Russia’s oil and gas spread over two million sq. km of land. The oil fields are concentrated along the Ob River, while the gas fields are in the extreme North — in Urengoi and Yamburg.

Despite the fact that in Western Siberia more than 7 billion tones of oil and 8 trillion cubic meters of gas have already been mined, the region’s reserves are still huge. In early February, scientists reported the discovery in the Tyumen Region of the world’s largest deposit of uranium. Its reserves — 2.5-3 billion tonnes — are a thousand times the size of the world’s previously known reserves. However, this uranium is located far from the surface of the earth — from 1 to 3.5 km down. No one has ever attempted to extract uranium from such depths. Incidentally, Siberia’s deposits of uranium may become accessible to Indian business.

Rosatom recently invited its Indian partners to take part in developing the Elkon uranium deposit in South Yakutia (Eastern Siberia). Rivers that extend for thousands of kilometers, the boundless taiga, mountain masses and plateaus occupying three quarters of the entire territory, lowlands of tundra — and only 6% of Russia’s population: such is Eastern Siberia. Here you have the celebrated diamond region of Yakutia, home of the world’s largest diamond deposits.

Russian Siberia possesses vast resources and significant investment potential, which will allow it to develop cooperation with the Asia-Pacific region. But despite the fact that Siberia shares a border with China, Russia’s economic relations with the countries of Asia are poorly developed so far. According to Ermolai Solzhenitsyn, managing partner of McKinsey’s Moscow office, of the total exports from the Siberian Federal Okrug, 16.7% goes to China and 6% to Japan. Only recently, the Russian government adopted a programme for energy development in Siberia and the Far East. To a significant degree, this is a part of a strategy to reorient the export of Siberia’s raw materials to the Asia-Pacific region. Last year saw the launch of a major project: the Russian-Chinese Skovorodino-Daqing oil pipeline, a part of the Eastern Siberia-Pacific Ocean pipeline system.

The Russian gas concern Gazprom has developed its own Eastern programme, which will allows it to use the energy potential of the Far East and Eastern Siberia. It involves the formation of new centres for extracting gas in the Krasnoyarsk Krai, the Irkutsk Region, in Yakutia, on Sakhalin and Kamchatka. It will also create a single system for transporting gas, while developing gas refining and gas-and-chemical production, including the capacity to produce helium and natural gas.

In the summer of 2010, the Russian government confirmed its wide-ranging strategy for the socio-economic development of Siberia upto 2020. It identified some 30 priority investment projects. These include increasing the population by some 800,000 people. The Russian government thinks that Siberia requires new industrialisation to harness its specific advantages.

The main priorities for developing Siberia include building roads, houses, community centres, and tourist zones. “Our aim is to create beyond the Urals within the next ten years a higher standard of living and make Siberia a truly attractive place for people,” said Russia's PM Vladimir Putin.