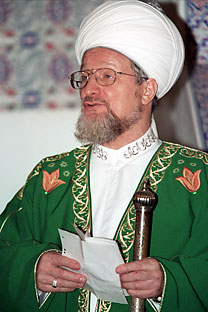 One of the top Muslim clerics in Russia suggested in a media interview that the country's state emblem must include not only Christian crosses, but a Muslim crescent as well. The initiative was not supported by Muslims or heraldry experts.

­Talgat Tadjutdin, who occupies the post of the Supreme Mufti of Spiritual Directorate of Russia’s Muslims made his suggestion in Friday’s interview with Moskovskiye Novosti daily. Tadjutdin said that one of the three crowns on the state emblem of the Russian Federation must be topped with a crescent to demonstrate religious diversity of the country. “If this is done no enemy will be able to use the religious factor to harm the unity and wholesomeness of our motherland,” Tadjutdin said.

He added that he had already sent sketches of the new state emblem to Muslim clerics in Russia’s various regions and added that he shared the idea with President Dmitry Medvedev and Prime Minister Vladimir Putin. He did not say how Russia’s two top officials reacted.

The Mufti’s idea created a small sensation in Russian media and the blogosphere, but the reaction was hardly supportive. Official statements that appeared on April 15, also said that the change was neither wanted nor feasible.

Echo Moskvy radio quoted deputy head of the Mufti of the Muslim’s Spiritual Directorate, Damir Khazrat as saying that Muslims in Russia are unlikely to support the move and added that there was no sense in discussing it. Another top Muslim, the head of the executive committee of the Russian Muftiyate Muhammedgali Khuzin said that the initiative was dangerous. “There are historical realities and heraldry norms, dwelling on this issue leads to the rise of xenophobic moods,” he said.

The head of the Russian Orthodox Church’s Sinodal Committee for Relations with Society, Protoiereus Vsevolod Chaplin said that the Russian state emblem is ages-old and there is no need for change.

Head of the State Heraldry Service of Russia, Georgiy Vilinbakhov said that the suggestion to amend the state emblem with a Muslim crescent was very strange. He said that the move will open the way for other changes. “According to this logic we must change the name of Russia, put a green stripe on our flag and move the capital city from Moscow to somewhere on the border between Europe and Asia. He also said that in this case a crescent should be added to the state emblems of the United Kingdom, France and the Netherlands.”

The current state emblem of the Russian Federation was introduced after the constitutional crisis of 1993 and it was officially described in the corresponding federal law. The description, however, only includes three crowns, not mentioning crosses or crescents. At the same time, the traditional image, borrowed almost entirely from the state emblem of the Russian Empire which had three imperial crowns on it topped with Maltese crosses with the fourth Maltese cross on the orb held by the two-headed eagle.

Mufti Tadjutdin is well known for his provocative statements both in Russia and abroad. He performed his probably most notable stunt in 2003 when he declared a Jihad on the United States of America in reply to the US attack on Iraq. Interestingly, the statement was never recalled so it is likely that Tajutdin is still at holy war with America.

At the same time, Tadjutdin is not the only Russian religious figure known for extreme ways of attention seeking. Protoiereus Chaplin, for example, has made suggestions to allow the clergy to run for political posts and to force society into adopting stricter religious morals, such as “Orthodox dress code.”

The Russian constitution states that the Russian Federation is a secular state, and makes all religions equal before the face of the law.