True grit causes a real stir on the contemporary stage 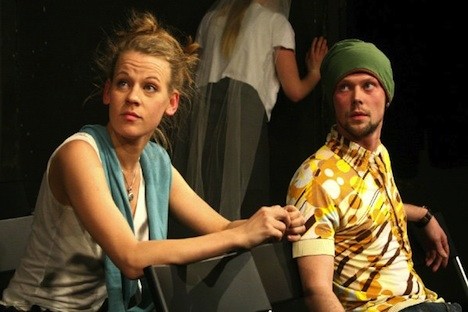 On an intimate Moscow black-box stage, four actors read their parts, including stage directions, from the scripts in their hands. They frequently look directly at the audience (the first row is only inches away). Slowly, the reading turns into performance. The tension builds as the actors transform into characters – four young and aimless drunkards. The audience appears both shocked and amused by the crudeness of Zhizn Udalas (Life Smiled at Me) which employs language unheard of in local theatres.

A cluster of young Russian playwrights armed with razor-sharp tongues and a hunger for realism is charting new territory on the Russian stage, bringing a fresh lustre to the country’s theatrical reputation with its “New Drama” movement. Their theatres are small and their themes are gritty, and they are attracting daring talents and lively audiences.

Teatr.doc, which produced Zhizn Udalas, is best known outside Russia for performing a play about the life and death of lawyer Sergei Magnitsky (who died last year in police custody), giving a voice to civil discontent. The group also staged a play based around internet reactions to the horrific 2004 school siege in Beslan.

Zhizn Udalas has been awarded a Golden Mask Award. The Golden Mask Theatre Festival is Moscow’s premier theatre event. It runs each year from March to April, closing with a showcase for cutting edge work, called the Case Festival.

Some foreign theatregoers may think the nation that gave the world Chekhov and Gogol has rested on its laurels in recent years. But whatever collapse of confidence and creativity occurred in the Nineties has been replaced with something worthy of Konstantin Stanislavsky himself.

Every night, roughly 30 theatregoers enter the tiny basement of Teatr.doc, which already has a cult following in Moscow. Here, a conspiratorial air hangs over the minimalist decor, and a near tangible chemistry occurs between the actors and audience.

Like the Bauhaus, the theatre’s maxim is, “Less is more.”  And, sure enough, New Drama is driving a crack through the ageing facade of Moscow’s main street theatres. The question now is: how long can Russia’s best-known directors ignore it? “Theatre must be contemporary. Theatres are suffocating under the old plays, but they slam the door in our faces,” thunders Marat Gatsalov, an actor and one of the movement’s leading directors. Mr Gatsalov directed this production of Zhizn Udalas, and the highly acclaimed Odds and Ends before it.

“Contemporary” is a word that reappears like a leitmotif with this breed of playwright. After a March performance of her play Mixed Feelings, Ukrainian dramatist Natalia Vorozhbit offered her definition of New Drama as “people who write about the contemporary world with a contemporary outlook and language. We are not afraid of provoking. Our writing must be emotional.”

Don’t go looking for politics in most of these dramas, however. The Magnitsky play is more the exception than the rule.  In spite of the dissent at the core of the movement, its writers so far reject open confrontation with the establishment. “Politics doesn’t interest me,” Ms Vorozhbit says awkwardly. Then, after a pause, she acknowledges: “A part of me feels ashamed for not writing on this subject. In fact, without having really discussed it between ourselves, I think we consider the topic too dirty to mention.”

The idea seems paradoxical, given New Drama’s fearless treatment of taboos (at least in Moscow’s theatres), such as drugs, prostitution and homosexuality. Yet despite – or perhaps because of – the otherwise risque subject matter,  a loyal audience is growing, and wider recognition may be in the wings.

New Drama has established its presence at an astonishing rate of one to two new productions per week, carried out with absolutely zero financial backing but with a growing confidence that the movement has broken through. The Golden Mask bestowed on Zhizn Udalas would seem to say so. “The Golden Mask festival is a showcase for the big state theatres, but they still gave us the best award last year and some nominations this year,” says New Drama author Mikhail Ugarov. “This recognition from them is a clear signal that New Drama is penetrating the mainstream. We are the mainstream now.”

Actress Darya Ekamasova graduated from Moscow's prestigious Academy of Theatre Arts (GITIS) in 2007 and now divides her time between filming and treading the boards of with Teatr.doc.

Do you feel you are a part of New Drama?

I joined the movement not long ago. Everything started when I acted in Boris Khlebnikov’s film Free Floating [2006], the screenwriter of which was [New Drama director] Alexander Rodionov. I made new connections with extremely talented people. I’m very aware and stay in tune with the movement – it’s exciting work for an actress.

Is it more stimulating to act in a New Drama play than in a big Moscow theatre production?

For me, the most important thing… is the text. I have a voracious appetite for interesting and complex roles. Unfortunately, they’re rare.

Who are your favourite playwrights at the movement?

My favourite authors are Kurochkin, Ugarov, Durnenkov, Gremina, Rodionov and Bondarenko. Something deep is emerging from them. Most of all, I appreciate plays where the writer doesn’t try to overdo it with airing dirty laundry… It seems that some writers compete to see who can use the worst language, the foulest expressions, etc. There’s a branch of New Drama that is going in that direction and it's not for me.

Can you define New Drama?

It’s an entirely new movement that still doesn’t have a well-defined scope. The only clear definition is that it doesn’t have a kopek to its name. Beyond that, it’s a living, breathing and largely misunderstood process.