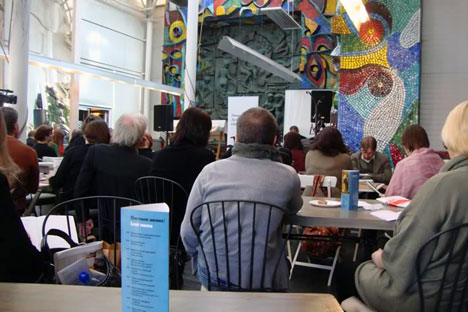 Scholars from all over the world gathered in Moscow to discuss how the social sciences can inform perception.

The 19th annual Bathroom Readings were held under the patronage of “New Literary Observer” magazine on Apr. 1-2 at the March Café on Petrovka. What was originally intended as a verbal edition of the magazine has turned into an important international conference, where the truth may be relative, but the search for it is conducted in real time with absolute persistence.

The conference’s theme was stated as “An Anthropological Revolution: The Re-humanisation of Humanitarians.” In other words, it proposed that human sciences turn to face the human perception. Hans Ulrich Gumbrecht stated that the most common and at the same time obviously acute problem in his report: Is mankind, with all its ability to think, capable of ensuring human survival in itself? Alas, the history of the 20th century does not leave much for a positive answer to this question. Nor did the answer provided by Gumbrecht, who noted that anthropology has the most immediate practical significance since if mankind manages to define itself, this will simplify communications between people.

In the excruciating process of self-determination, mankind until now has not been prepared to reject community or diversity and has nurtured both of these ideas. More and more, in history, literature and cinematography, we are most of all interested in ourselves, our own perceptions and the living testimonies of witnesses with whom we can identify. Igor Narsky, the author of the book “Photograph as a Keepsake” about family archives and Soviet childhood, noted in his report that more and more, historical research speaks not only about the subject of the research but about the researcher himself. While Narsky says he welcomes subjectivity in historiography (calling it lyrical historiography in this case), he acknowledges that problems exist, namely the increasing fragmentation of the “greater” history.

Sergei Ushakin’s report pointed out the evolution not of subjectivity, but of conscious myth-making. Using the example of two clear symbols of the mid-20th century—Katyn village and the Kurapaty Memorial near Minsk—Ushakin demonstrated how facts are interpreted differently depending on external conditions and the intent of the interpreters, while the powerfully traumatic concept of “genocide” serves as a core for forming post-colonial logic. Ushakin called such historiography “a departure from the present” in contrast to the idea of a departure to the past.

Kevin Platt made his report on Russian history, which he believes is typified by manageable collective trauma. The sense of belonging to a collective trauma (both as the object of the trauma and its active subject) for many centuries, in Platt’s view, is an important feature of Russian self-identity. Russians are even still upset about the criminal acts of Peter the Great and are unable to agree on whether or not his influence was largely beneficial or destructive. According to Platt, this traumatizing effect of history is truly a destabilizing factor, he said, and prevents Russia from moving forward.

Of course, history was only one of the battlefields. The Bathroom Readings participants were also intrigued by the expressiveness of cinema (Mikhail Yampolsky), the concept of politeness in the world (Aleida Assmann) and constructive literature as a world which a person can enter (Valery Podoroga). But if life is a disease (a question Aaron Shuster posed in his report), then subjectivity manifests itself in history most appropriately as the embodiment of freedom and the desires of a sick animal. If one assumes, however, that mankind nevertheless remains capable of influencing its own fate, history does not have to remain a trauma.