Matzo in Moscow: the religious rite that Stalin couldn’t break 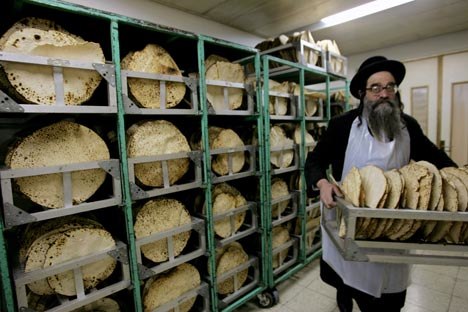 In the past, the baking of matzo endured strict repression. Photo: Reuters/Vostock-Photo

Through repression and revival, Russia’s Jews maintained the matzo-baking rites of the Passover to commemorate the Exodus.

When Israeli prime minister Benjamin Netanyahu visited Moscow last month, the food he enjoyed at the Kremlin was as kosher as it comes, the result of staunchly upheld Jewish tradition – and terrible sacrifice.

“My grandfather was executed in 1950 in Leningrad by the Soviet state because he made matzo, the flat unleavened bread eaten by Jews, instead of leavened bread during the eight days of Passover,” says Rabbi Yitzak Kogan, who heads Moscow’s main Lubavitch synagogue, and whose son was tasked by President Medvedev with serving authentic dishes to the visiting Israeli premier.

While Orthodox Christians bake their own traditional fare at Easter, Russia’s 223,000 self-identified Jews (2002 census) will, from the April 19 start of the Passover, break the bread of ages that is matzo to mark the Jewish flight from Egypt.

Since Mikhail Gorbachev’s perestroika reforms of the mid-Eighties, the religious life of the Jewish population has risen from the ashes, and with it, openly baked matzo from the oven. Mass immigration to Israel and the US after 1991 delayed the full revival that came with the economic turnaround in the early 2000s. But today, the Russian capital is home to 15 synagogues, up from just two during the Soviet era.

Passover rites were among rare pieces of cultural heritage passed down within the Jewish community in Soviet times, note stalwarts of the faith. “When I was a child, people would go to (Moscow’s) Choral Synagogue, which was the only one functioning,” says Rita, Rabbi Kogan’s secretary. “We’d line up on a huge staircase with our own sacks of flour, and at the top, Jews would be making matzo in silence.”

At the tail end of the Stalinist repressions, families still came together for the two first nights of the Passover and for the forbidden bread. The bolder ones would invite guests, despite the lingering danger of arrest.

“My family welcomed everyone who wished to hear the Hebrew recitation of the Exodus from Egypt – during Passover, the door stayed open all night, something that was still a danger in the Fifties,” recalls the Yiddish-speaking rabbi, who sports a long white beard and the traditional black hat of the Lubavitch Hasidim.

Today, Rabbi Kogan’s synagogue, which is located a few hundred yards from the Kremlin, welcomes 800 people for the Passover meal. The Choral Synagogue receives around 1,000 people on the holy day, somewhat to the dismay of more fastidious worshippers who insist that much has been lost. “It isn’t a good thing, really,” Yitzak Lifshitz, the head of the synagogue’s kosher food service, says of people congregating at the building – rather than people’s homes.

“The Passover celebration is a family event, representing an essential occasion for conveyance between parents and children, where the parents explain the history of the Jewish people. These days, many people have forgotten how to celebrate it, which is why they come here.”