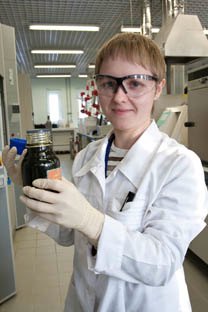 A worker at the Sakhalin LNG plant laboratory. Photo: PhotoXpress

Faced with gas pipeline problems, Russia is ramping up the development of liquefied natural gas as an alternative supply option.

As fossil-fuel demand and prices surge due to recent events in North Africa and Japan, Russia is moving to strengthen its export operations with construction of new facilities to produce liquefied natural gas (LNG).

Transported by special freezer ships, LNG in large quantities frees both producer and purchaser from the tangled politics involved in building permanent pipelines. Russia already has one LNG plant on the Far Eastern island of Sakhalin that sells much of its output to Japan. In March, the Kremlin announced plans for a similar processing plant on Russia’s western coast.

Building an LNG plant on the Yamal Peninsula, which taps into the vast reserves of western Siberia, is an alternative to supplying natural gas to Europe via pipelines. But it also underpins prospects for Russia’s contentious South Stream pipeline project to southern Europe by broadening supply options, according to Energy Minister Sergei Shmatko. “Russia does not face a bottleneck in its obligations under the South Stream project, but has several alternatives,” Mr Shmatko told Prime Minister Vladimir Putin in a recent report.

Uniting Russia's semi-state  gas giant Gazprom with Germany’s BASF and Eni of Italy, South Stream would pipe Siberian gas to southern Europe. But the project is ranged against the rival Nabucco pipeline promoted by the European Union which, if built, would skirt Russian territory and link Europe directly to the gas reserves of the Caucasus and Central Asia. Recent revolutions in North Africa have bolstered South Stream by jeopardising supplies for Nabucco, but both pipelines have been embroiled in geopolitical wrangling by countries along their routes.

The planned LNG processing plant in Yamal would break the deadlock, as liquefied gas can be shipped to anywhere that has a port and facilities to offload it. Overall, exports of LNG from Yamal, Sakhalin and the Shtokman gas field in the Barents Sea should move up to 85 billion cubic metres of gas annually to Europe and Asia, Mr Shmatko said last November.

Mr Putin also ordered the energy minister to study the possibility of building an LNG plant on the Black Sea coast, close to Russia’s main oil export ports and the planned undersea route of the South Stream pipeline, which will come ashore in Bulgaria or Romania.

Gas is coming back into focus after oil prices rose rapidly due to the North African political turmoil, plus the impact of Japan’s recent earthquake and tsunami tragedy and ensuing nuclear accident. VTB Capital estimates that, with the disruption of oil supplies to Europe caused by the Libyan conflict, Russian gas exports could this year grow by 10-15 billion cubic metres, or 7-10pc of Gazprom’s total exports.

Prices on European gas spot markets also spiked after Japan’s earthquake. “We believe the increase in the spot price reflects the market’s anticipation that LNG demand will be significantly more than previously expected, as Japan strives to make up for the loss of nuclear power generation capacity,’ said VTB analyst Lev Snykov.

Meanwhile, leading private gas producer Novatek spent $526m (Ј321m) on a 25.1pc option on the planned Yamal LNG plant. Novatek already owns 51pc of the project and has a call option on another 23.9pc stake, should the plant go ahead.