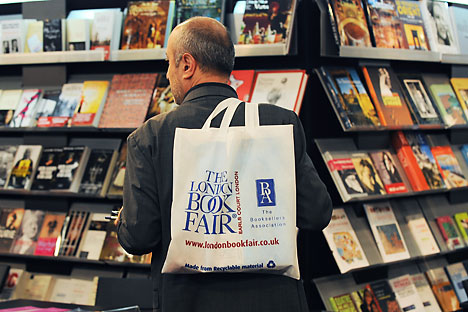 The Russian government teamed up with leading publishing houses and some of Russia’s top contemporary authors last week to put Russian publishing in the spotlight at the London Book Fair. But will sending an unprecedented 50 leading writers to the British capital be enough to give the world’s fourth largest publishing industry a bigger share of the English-language market?

Russia was this year’s market focus at the London Book Fair, an annual forum for publishers, booksellers, literary agents, authors, librarians and suppliers from across the world. In addition to publishing professionals, who are regular attendees of the event, this year the Russian delegation swelled to include high-profile figures such as the Head of the Russian Presidential Administration Sergei Naryshkin, top authors led by Boris Akunin, and representatives of the Russian Orthodox Church – in London to plug Patriarch Kirill’s latest book. “The fact that Russia is the market focus shows that the humanitarian ties between the two countries are developing and growing,” said Naryshkin, speaking at the official launch of the Russian Market Focus.

But while Russian literary giants such as Anton Chekhov, Leo Tolstoy and Fyodor Dostoyevsky are well represented in English language publishing, their modern counterparts are not, with the few notable exceptions of Victor Pelevin and Boris Akunin. There are a number of reasons for this, from a dearth of quality translators and inconsistent promotion to the nature of English-language publishing itself – only two to three percent of books published in Britain and America each year are translations, compared to Western Europe, where translations account for over 30 percent of the market.

Akunin, also speaking at the launch, described Russia’s strong literary tradition as a barrier for contemporary Russian authors attempting to forge a reputation abroad. As one of Russia’s most successful contemporary authors who has also managed to make a mark outside Russia, Akunin said: “The problems come when we Russian writers go abroad. We can see in people’s eyes that they are wondering ‘are you the new Chekhov or Dostoevsky?’”  He urged foreign audiences to be patient “There must surely be another Chekhov or Dostoevsky, just be patient, please.”

But Akunin’s success is relatively rare and many of the other authors in London for the Book Fair find that success at home is hard to repeat abroad, with English-language markets the hardest to crack.

Vladimir Makanin, who has been writing and publishing since the Nikita Krushchev era, has won the Russian Booker Prize, the Big Book Prize and seen his work added to the Russian curriculum. “I have at least 16 books published in France and Germany, but only three in the English language,” Makanin told Russia Profile. His novels “Escape Hatch,” “Baize-Covered Table with Decanter” and “The Loss” have been translated into English. “I hope that interest will increase after the fair,” Makanin said. He was also one of the authors to take part in events in Britain held outside the trade fair, aiming to raise the profile of contemporary Russian authors among the British public. The program concentrated on London, but also included readings and discussions with Russian writers throughout the country.

Other industry professionals, such as publishers, also play a key role in the scale of Russia’s presence on external markets.

Oleg Zimarin, the director of the Ves Mir Publishing House, is a veteran of the London Book Fair, having first come here in 1998. Zimarin normally comes as a trade visitor rather than running a stand, and told Russia Profile that the Frankfurt Book Fair is more important for his publishing house, and tends to attract more Russian publishers. Zimarin stressed the increase in Russian participants this year compared to previous years, particularly 2010. “Well I think last year I was here alone,” he said, “the volcano in Iceland meant a lot of people couldn’t make it.” He was also impressed with the nature of this year’s Russian presence. “I like how the Russian stand looks, its general design, that’s better than Frankfurt. The Russian presence here this year is much stronger in terms of promotion than in Frankfurt,” he said.

The bulk of Ves Mir’s output is in Russian, but it has produced some political works in English, including a biography of Sergei Mironov and several volumes of Mihail Gorbachev’s works. The company also produces Russian-language versions of publications by The World Bank and United Nations.

For some participants at the fair, the market focus was a reflection of the recent growth and maturity in the Russian publishing industry. George Slowik Jr. is the president of Publishers Weekly, which produced Publishing in Russia: A Special Report 2011. He is optimistic about the recent improvements in the Russian publishing industry: “Each year we produce a global ranking of the top 50 publishers. No Russian publisher had been included before, but when we visited last September we realized two should be included, both in terms of the volume of books produced and dollar turnover. They are Eskmo and AST, and there are others which are close to being in the same league.”

Slowik also stressed that translation into the most widely spoken Western European languages paves the way to publication in the rest of the continent’s languages, making cracking the British market even more appealing. “When a book is translated into French or English or German it opens the way for translation into languages from many other smaller markets,” he said.