New wave of Russian expats washes up in ‘Londongrad’ 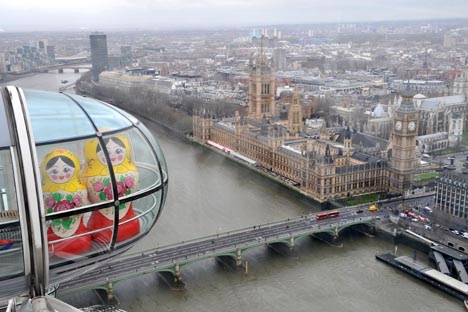 Giant matryoshka dolls take a spin on the London Eye for the opening of the Russian Winter Festival held at the South Bank Centre in January 2008. Photo: NilsJorgensen/RexFeatures

From several hundred Russians – exotic birds inhabiting these lands in the Seventies – to several hundred thousand at the start of the new century, this is the speed at which the UK is being “Russified”.

It’s no coincidence that London has earned the nickname “Londongrad”: as the famous British translator of Chekhov, Professor Donald Rayfield, noted humorously, it has become impossible to speak Russian peacefully on the London Underground, as a native Russian speaker will undoubtedly be found in the same carriage.

Russians are everywhere, disguised as boutique salespeople, doctors, waitresses, estate agents, schoolteachers and university professors: Pyotr Reznikov has held a department chair for many years at Eton College. Let’s not, however, get into window dressing. There are also stains spilled by our countrymen on the starched tablecloth of their new British homeland. There have been scandals involving disgraced oligarchs, the gloomy “poisonous” years of the Litvinenko polonium scare, and rumours about the dirty billions held by the filthy-rich Russians who have settled in Albion.

So why have all these people come to Britain? What good have they brought to British society? In what way has this society enriched them? In order to answer these and other questions, Russia Now canvassed the opinions of several seasoned “Russia watchers” in a recent round-table discussion at London’s Pushkin House Russian Cultural Centre.

MARK HOLLINGSWORTH Co-author of Londongrad – from Russia with Cash

RN: There is no such concept as “Parisgrad” or “NewYorkgrad”, while “Londongrad” exists. What is the magnet that draws Russians here?

Paul Halloran: In France, you need three months to set up a company; in London you could do it in a day, even over the phone. The judiciary is independent, financial services are extremely well developed. Education for their kids is good, and the British are very nice people.

William MacDougall: It may be a generalisation, but it is also completely true, of course. I would add that Britain is a good place to be from a tax point of view.

Katerina Ukhankova: Britain is a safe place and a “fashionable” country to live in, while London is a world financial centre. So little wonder so many Russians choose “Londongrad”.