Through the hell of the Red Forest: a liquidator remembers 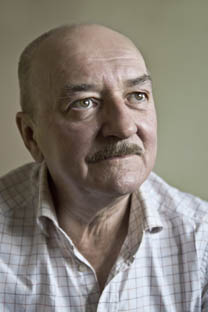 Alexander Antonov was pressed into action in the Chernobyl clean-up. Unlike some of his comrades, he survived to tell the tale.

Alexander Antonov sits chain-smoking at the kitchen table in a worn jacket and jeans. He’s had 25 years to reflect on his experience, but the retired journalist still struggles to find the words.

“After Chernobyl, I know what it must have been like in a war,” he finally begins.

In his youth, Mr Antonov had been stationed as a Red Army soldier for almost three years in East Germany. Little did he expect to be conscripted again – at the age of 40.

Immediately after the Chernobyl reactor explosion on 26 April 1986, young recruits were sent to the disaster zone to begin crude clean-up efforts. Mr Antonov heard from people who were there how that went. In one instance, teenage soldiers were sent up to the roof of the undamaged reactor where the radiation was strongest. “They ran up like they were possessed, picked up say a chair leg with a shovel, threw it off the top and then ran back down, all  in about 40 seconds,” he says.Ample time to receive a lethal dose of radiation.

“As it became clear that they were all doomed to die, they called in 40-year-old reservists. Their logic was something to the effect that they already had children and had nothing else to live for.”

And the journalist was one of them. One evening in January 1987, two military personnel came to his door, checked his passport and ordered him to appear at armed forces headquarters the next morning. Mr Antonov knew immediately what this meant and that there was no avoiding it. A few days later, he was riding in a truck through the “Red Forest” – woodland near the power plant that  had been exposed to such  high levels of radiation that the trees turned red and died. “The villages were all deserted, and the birds’ nests were empty,” he recalls.

The soldiers lived in a tent in the 30-kilometre exclusion zone around the reactor. Although Mr Antonov was there as a truck  driver, to bring soldiers to the area daily, those in charge decided they needed someone who could use a typewriter to type up reports – and he was chosen. “That probably saved my life,” he says.

Mr Antonov was there for 50 days and drove three times to the reactor, taking him past cooling ponds that had frozen over: “I could not believe my eyes when I saw an ice fisherman out there.”

The majority of the soldiers did not wear protective masks, even though many of the objects lying around were heavily contaminated. Mr Antonov was not as exposed to the radiation as many others ,thanks to his typing duty. But to this day his skin reddens severely when exposed to the sun, the result of his time as a so-called “liquidator”, doctors tell him.

One scene in particular remains seared into his memory: the sight of a young soldier from Turkmenistan who sat beside him in a hospital in Kiev: “He looked ghastly, his eyeballs were literally hanging out of their sockets.”

The soldier, who was also a truck driver, had got out to change a tyre that blew in the middle of the Red Forest – where they were under strict instructions never to stop. “Many died there,” Mr Antonov says quietly, lighting another cigarette.

Badge and a fruit basket

The only way they could cope with the horrors of the work was, he says, with vodka. People have generally avoided the subject of Chernobyl and what he went through. Not even his fellow journalists at Pravda would speak to him about it, perhaps afraid of what they’d hear, he says.

For his services as a liquidator, Mr Antonov received a monetary bonus that allowed him buy a car, a rare privilege in Soviet times. But he  ditched it after the 1991 Soviet collapse because it was a reminder of something he wanted to forget.

In 2006, on the 20th anniversary of the disaster, the Soviet Union caught up with him one last time: “The state presented me with a liquidator badge, a basket of fruit and vegetables, biscuits and chocolate – just like in the ‘good old days’.”