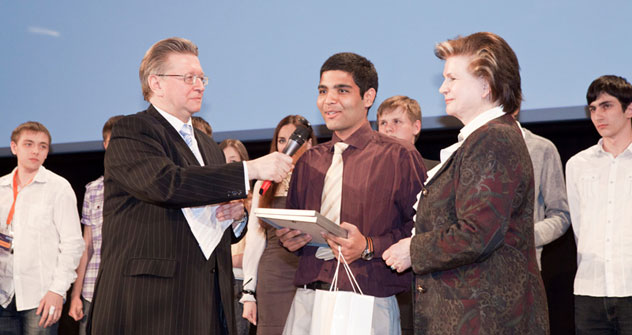 Siddharth Kalra received the grand prize, space tourism, which includes a trip to the Baikonur Cosmodrome.

With stars in his eyes, it was literally a dream come true for Siddharth Kalra, an 18-year-old Indian youth, who always fantasised about exploring space since his early teens. Early this month, his space fantasies inched a closer to reality when he won the top prize at the coveted international youth space Olympiad. The prize, presented at the UNESCO headquarters in Paris on April 21, includes a trip to the Baikonur space-launch site where he will watch the take off of a Russian Soyuz booster rocket. Called Star Relay, the space olympiad commemorates the 50th anniversary of Russian cosmonaut Yuri Gagarin’s maiden space flight fifty years ago.

Kalra’s winning idea was a proposal to set up a world space agency to tackle futuristic challenges like the exploration of Mars. He submitted an analytical report on the development of space exploration in the next fifty years.

The runner-up was Anna Bobr of Rostov-on-Don (Russia) who proposed methods of protecting the Earth from asteroids. The third place went to Vladislav Dovzhenko of Lithuania for his paper on the colonisation of Earth and Mars and on the development of space tourism. The fourth place was bagged by Alexei Koksin from Kemerovo (Russia) for creating software that shows the star-studded sky form any point in the universe. The jury said the software could be used as a basis for space navigation.

Julia Noval Montero of Brussels (Belgium) won the fifth place for her work on an intermediate space station. Special prizes were awarded to several finalists. The Olympiad was co-sponsored by Russian agency Rossotrudnichestvo and UNESCO.

Important as the prizes were, other treats were in store for 19 finalists that included a sightseeing tour of Paris and a visit to the Space and Astronautics Museum at Le Bourget, as well as meetings with the cosmonauts who were part of the jury.

“All this is fantasy,” said an elated Germashevsky, after listening to the presentations. “But you must dream,” he said.

After the Olympiad, Alexander Chesnokov, Deputy Head of Rossotrudnichestvo, pledged that the organisers would not stop there and would continue the Olympiad next year. The division into categories and age groups will give a chance for more young people to take part and win prizes.