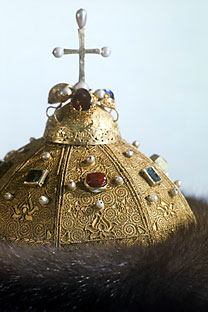 As excitement over this month’s Royal Wedding reaches fever pitch, it seems appropriate for Russia to seriously consider a strategic return to monarchy.

As excitement over this month’s Royal Wedding reaches fever pitch, it seems appropriate for Russia to seriously consider a strategic return to monarchy. There are those who will feel that this is a complicated and expensive move, but it is clear to me that properly constituted, the return to monarchy could go a long way to mitigating a number of Russia’s current issues. Sure, it’s expensive, but surely not as expensive as the Sochi Olympics, and a far superior long-term investment. I won’t reveal which of the candidates I think should wear the Cap of Monomakh (not in this month’s column anyway), but I will pose this question: What is a Stabilization Fund for if not to create stability? The best way to do that is to get “The Imperials” back to work as heads of state in Russia.

1.  Russia Already Functions Like a Monarchy: It’s hard to impose hereditary monarchy on countries that are used to hundreds of years of representational government, but, happily, Russia doesn’t have that problem. The mindset is primed for a seamless return to Tsar Alexander III’s trifecta of “Autocracy, Orthodoxy, and Nationalism.” The Church would be the first to sign up and lend the new monarch their not inconsiderable influence and support to get the populace on board. It’s a no brainer.

2.  Russia Has the Equipment:  Russia has all it needs in terms of regalia — crowns, orbs, scepters, thrones, carriages, palaces, crown jewels and a coat of arms — all tucked up in the Diamond Fund, no doubt more than ready for an airing. The existing real estate just needs minor renovations such as indoor plumbing.

3.  Monarchy is Great Public Relations: It goes without saying that the Imperials would do wonders for Russia’s PR, both at home and abroad. At home, they could handle things like charitable causes, visit factories and open sports events. This would free up the people who run the government to run it. Abroad, the Imperials could spearhead things like bids for major global sporting events. Or, better still, they could just have the occasional wedding at home. Monarchy, of course, is to tourism what honey is to flies. And while the KGB/FSB is an admirable school of management for many aspects of government, PR isn’t one of them.

4.  More Fun at Home: An acute problem with Russian society today is that everyone wants to go and have fun elsewhere. The Imperials would foster and encourage fun at home by creating a social calendar and thereby an axis around which the socially ambitious would revolve. They could make unlikely backwaters fashionable, just as Prince Albert did for Scotland. Imagine boating week in Volgograd, winter sports in Krasnodar, and the elk-shooting season in Omsk.

5. A Shot in the Arm to the Military: Monarchy is always a boon for the military, the only profession considered suitable for the male members of any Imperial dynasty. The army will become a competitive profession. Families will stop paying money to keep their sons out and start paying money to get their sons in. Total rehabilitation.