Are there triathlons in Russia? 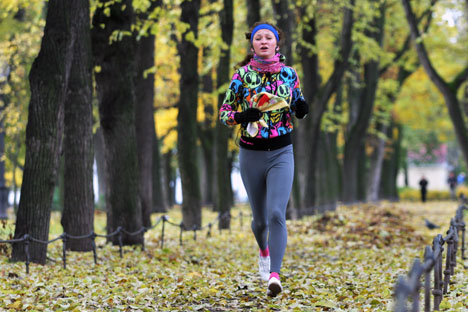 Should the government's drive to promote healthy lifestyles involve participation in amateur sports?

“Are there triathlons in Russia?” my husband asked one evening. It had never occurred to me that if we ever moved back to Russia, I might have to give up my favorite hobby.

When we moved to DC, one of my first moves was to join a gym—like every other American in my peer group. But this is a highly competitive city, and I am a type A, hyper-driven person, so working out longer and faster than the person on the treadmill next to me eventually wasn’t enough. And so I fell under the influence of the DC Triathlon Club. It’s easy to be a triathlete in the Mid-Atlantic region. You can train practically year-round, and in the spring and summer there is a race almost every weekend. But triathlon in Russia would be a completely different proposition.

Even if you were willing to deal with the challenges posed by the weather, you would have to be a particularly determined person to cope with the inevitable stares from people on the streets and comments from babushki.

Russians don’t seem particularly enthralled by exercise. On a short run around my neighborhood in Washington, I pass on average 20 other runners; on a nice weekend day, it can be closer to 100. In Moscow, however, I don’t think I ever once saw people running for exercise. Ok, to be fair, I did see some once. They were American diplomats.

Is it the climate? Is it just that, being genetically fortunate to be tall and thin, Russian women don’t see the point in working out? Or maybe it’s that Russians mistakenly think they’re healthy. Americans, on the other hand, are constantly reminded that we aren’t. And so you respond by becoming some kind of “weekend warrior.” In D.C., it’s almost embarrassing if you get to work on Monday morning and you can’t contribute to the discussion over the coffeemaker about someone’s weekend tennis game or bike ride.

Promoting healthy lifestyles is one of the Russian government’s new goals. So far, discussion seems to be focused on reducing drinking and smoking, but there needs to be an active component, too. Any attempt to go for a run after a night of heavy drinking would quickly indicate the need for some lifestyle changes. In the end, it’s all about peer pressure. If your co-worker starts bragging about going to the gym every day, chances are, you will too. And if you've told everyone you know you're doing a triathlon, you can't exactly back out gracefully.

For the record, according to trimapper.org, there are two triathlons in Russia—one on the outskirts of Moscow in Bitsevsky Park and one in Vyborg, as well as several in Estonia and Finland. So, if we do move back to Moscow, I’m probably going to have to invest in more gear rather than sell off what I’ve got. I think bike chains would come in handy. And probably a long-sleeved wetsuit. I can’t imagine any of those Finnish lakes being warm enough to swim in without one.