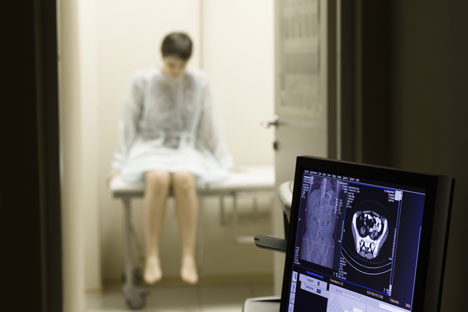 Neonatal surgery is expected to save thousands of children per year in Russia. Photo: Rex/Fotobank

Russian doctors and their patients wait for new reforms to help them get the medical care and facilities they deserve.

When Yevgeniya Ivanovna’s mother went into the hospital recently, her daughter, Zoya knew intuitively that she should pay the nurse an unofficial fee in cash – even though the hospital is not private.

She handed over $18. It is not the size of the fee that is the problem, according to sociologists, but the nature of it.

On paper, Russians have a health system that is free. That paper is the constitution, written in 1993, which guarantess universal health care.

In reality, Russia has a split system with a mix of private medical care and a state system that lags far behind. Years of underfunding has left the healthcare system in a precarious state with decrepit hospitals staffed by demoralized and woefully underpaid staff, many of whom encourage patients to make ad-hoc payments.

One of the great contradictions in Russian society is the fact that some of the best doctors and scientific researchers come out of a country where, a few hundred miles outside Moscow, patients’ families can be expected to buy their own gauze, needles and bags of saline and other needs for a hospital stay. Magazine stories describe hospitals where instruments are sterilized in soup pots on electric coils.
Quality Caretakers Expect a Daily Struggle

The Russian government is embarking on a huge reform which will see an influx of cash, over $28 billion, to outfit the country’s hospitals with new high-tech equipment, better salaries and, it is hoped, improved care by 2013, Prime Minister Vladimir Putin announced at the All-Russia Medical Workers’ Forum this month. The spending boost should see Russia increase its healthcare spending from 3.9% to 5% to approach EU levels.

The dire state of Russia’s health care and its precarious mortality rate have acted as catalysts for the reform. “Russia has a birth rate characteristic of developed countries — low — and a death rate of a developing country — high,” said Masha Lipman, an analyst at the Carnegie Center in Moscow. “There are several causes for the death rate, and one of them is an inferior quality of health care.” The most dire warnings by demographers predict that Russia’s population could drop from 142 million to 100 million by 2050.

But no trend is irreversible: Russians who anticipate longer and healthier lives may want to have more children.

The government is building a series of health centers around the country with a focus on cardiovascular disease and cancer.
Dmitry Pushkar, 47, is Russia’s chief urologist and an experienced surgeon with a world-class reputation. He has done groundbreaking work in bringing cancer-curing technologies and experience to Russia, and is a pioneer in the field of preventative medicine for men. After successfully obtaining funding from the Ministry of Health and Social Development to import life-saving robotic surgery equipment to hospitals in four Russian cities, Pushkar felt the problem goes deeper than financing.

“Society itself must deliver a message,” Pushkar said. “What does it mean to be a doctor? Society means everyone, the president, the prime minister, workers. A united society must say that we understand what it means to be a good doctor and how important it is.”
The reforms will place an emphasis on preventative care and will include the retraining of doctors, Health Minister Tatyana Golikova stated in a government report.

The Soviet system, which was free for everyone, concentrated on specialist and hospital care, ignoring preventative care. In Russia, cancer is still often diagnosed when the disease has spread to a late stage, Golikova said.

One of the programs in the new reforms will set up nine high-tech perinatal centers around the country. Golikova said that the use of neonatal surgery will be expanded and is expected to save the lives of 1,000 children each year.

But for now, Russians have little confidence in their healthcare system, and some are opting for private insurance. In fact, the insurance industry is predicting double-digit growth. The rich, meanwhile, often head abroad for top medical treatment. Israeli hospitals, which are often staffed by emigre Russian doctors, advertise for patients in Russian newspapers.

As Zoya found out, it is standard practice to pay this vague tax that has no price list and no official recognition.

“The minute you arrive you pay everyone: You pay nurses, the people who clean the floor, the doctor and the surgeon,” Lipman said.
“The only way you know how much to pay is by asking people around you,” Lipman continued, emphazing the informality of the process.
The reforms will raise doctors’ salaries by up to 30 percent, but with wages so low, the medical profession is not yet impressed with that, said Kirill Danishevsky, an independent health expert.

Pushkar, the urology chief, said that part of the solution is moral as well as financial.

“It’s impossible to reform in a month or a year, but we can start by saying that there are good doctors and bad doctors,” Pushkar said. “We should provide the good with total support.”