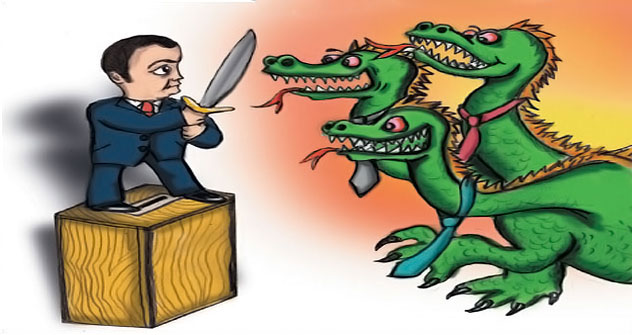 In a sweeping reform, thousands of government officials are being forced to resign their positions on the boards of state-owned companies.

President Dmitry Medvedev has moved against some of the most powerful men in the government, including Deputy Prime Minister Igor Sechin, who is perhaps the closest figure to Prime Minister Vladimir Putin – and who until recently was chairman of Rosneft, Russia’s largest oil firm. Medvedev signed a decree to strip Sechin and others of their chairmanships of some of Russia’s biggest state-owned companies.

The stated purpose of the decree was to improve the country’s investment climate, but the purge may reflect other, more important goals.

Medvedev has, in the past, recognized both the need to attract Russian and foreign investment and the country’s dismal investment climate. But this time, his actions truly matched his rhetoric as he outlined specific measures to be taken and set deadlines for implementing them. And with some of the measures bound to face stiff opposition by powerful interest groups, the reforms are set to be a major test of Medvedev’s real strength – and of his plans to run for another term as president. Even partial success would allow a Medvedev reelection campaign to be built around themes of anti-corruption and transparency.

Corruption and government accountability are probably the most important issues for Medvedev’s electoral base among the country’s rising middle class and “protest voters.” United Russia’s recent poor performance in regional elections shows that the electorate is fed up with the status quo and is ready to vote for an alternative.

The success of leading anti-corruption activist Alexei Navalny is another wake-up call for Medvedev. Notably, many of the measures proposed by the president are similar to those recommended by Navalny: removing government officials from the boards of state-owned companies, ensuring access to corporate documents for minority shareholders and developing a way to respond to whistleblowers on corruption.

Medvedev made a simple and convincing argument: Those who fear transparency are those who have something to hide. This is not an abstract accusation. Navalny’s repeated requests for the minutes of several state-owned companies’ board meetings generated huge resistance. Two companies even tried, unsuccessfully, to change the law to reject shareholder requests for information.

The most controversial of Medvedev’s measures is the removal of key bureaucrats from corporate boards. His orders list 17 state-owned companies and the powerful ministers and deputy prime ministers to be removed from board chairmanships by July 1.

The president’s logic is straightforward: A government official in charge of an oil company or a bank faces an inherent conflict of interest. The chairman of a board must serve the interests of the company, but a government official must pursue public interest, which includes preserving a competitive environment in the oil or banking sector.

Yet board chairmanships remained the domain of the bureaucracy. Not a single state-owned company has an independent chairman. And the chairmanship is a vital position, as its occupant sets the agenda and controls discussions.

It is difficult to talk about standards of corporate governance in Russia’s state-owned companies since most do not even have regularly scheduled board meetings, owing to the unpredictability of government officials’ schedules. This may seem little more than an annoyance, but it has a key implication: When there is no regular schedule for board meetings, many independent directors – especially foreigners – often cannot attend. If the board chairman is not a government official and can commit to an annual schedule, highly skilled independent directors from around the world could be attracted.

It is not clear who will replace the bureaucrats as board chairs. Given their importance, the new chairs must have the necessary skills and integrity.

It is uncertain whether the new board chairs will actually run the companies. Russia’s legal system is imperfect, and even serious violations of corporate governance are difficult to punish. It is not unthinkable that management will simply ignore the boards.

Finally, while some board members are truly independent, others receive “directives” from the government; it matters whether the new board chairs run their boards independently or according to the Kremlin’s orders. In the latter case, the new — and quite expensive — chairs would be treated as government proxies, making a mockery of the entire exercise. The good news is that Medvedev’s chief economic adviser, Arkady Dvorkovich, has said government directives “will be reformed” as well.

We will know soon – certainly before July 1 – whether Medvedev can implement his agenda and whether he is willing and able to build his own power base in the process.