A call from Skolkovo 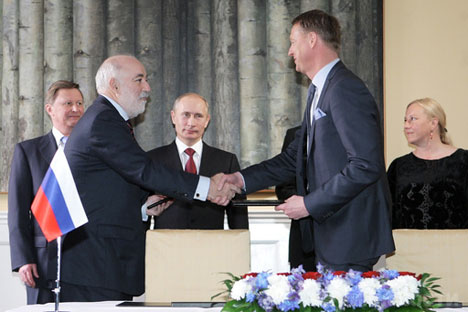 The Swedes will help Russian cities save up to €7 million a year.

The first companies planning to set up their research centers in Skolkovo will be announced in June at the St. Petersburg Economic Forum. The focus is being made on global names and brands.

Skolkovo expects to attract a total of about 45 major corporations, says Roman Romanovsky, managing director of key partners of the Innovation Center.

On April 27, an agreement was signed outlining the commitment of the Swedish corporation Ericsson, which specializes in telecommunications and technologies, to working with the Innovation City. In addition to its own R&D center, the Swedish company will provide Skolkovo support in organizing the Skolkovo University of Technology, which is also expected to appear in the Russian “Silicon Valley.”

The question of how much the company plans to invest in Skolkovo remains unanswered by its representatives. But according to Romanovsky, a road map which will outline in detail all of the steps and specifics of construction of the R&D center will become available within the next three months. The plan is that eventually, numerous Russian innovative startups will begin to grow around these centers.

However, the speed and success of the creation of an R&D center depends on how well we manage to attract Russian companies from other economic sectors to the Innovation City, said Robert Puskaric, head of Ericsson operations in North Europe and Central Asia. Thus, Skolkovo organizers have to not only do some major work on luring the global business trendsetters to the Innovation City, but also on bringing in the domestic “Kulibins.” As for the possibility of opening the company’s manufacturing sub-units on the territory of our country, he has made it clear that it is not currently being considered. However, he did not exclude that if a need arises and Russia shows some competitive advantages over other countries, such a development of events is also possible.
Incidentally, in the late 20th century, the Ericsson telephone production plant in St. Petersburg was the company’s largest industrial unit, and the number of its workers was twice the number of employees at the plant in Stockholm.

The Swedish company has already identified the general areas on which it can focus at the Russian research and development center in Skolkovo. They are related to various solutions in the spheres of mobile communication and broadband access technologies used in transportation, in the healthcare industry, and in public safety.

The company already has designs that make it possible to organize “remote medical treatment,” for example. Patients are given a special briefcase with a set of health monitoring devices that determine a person’s blood pressure, pulse, glucose levels in blood, etc. Then, all this data is transferred to the doctor through a mobile device. Thus, he is able to monitor a patient’s health remotely. This eliminates the need to travel to see a doctor, and the doctor gets more time to attend to other patients. Meanwhile, according to expert assessments, 85% of all healthcare spending is directed toward the chronically ill.

In the transportation sector, the Swedish company showcases a system that resembles the advanced GLONASS system. It is able to send signals about a situation with a car to not only the traffic police, for example, but also to the navigation units of nearby cars. And if, say, one car comes to a sudden stop on the road, then the warning signal that is transmitted to other drivers will help avoid an accident. Of course, this will require cars to be equipped with the special devices. But according to specialists, traffic safety is already significantly improved when they are installed in 10 percent to 20 percent of all cars.

In Sweden, the company is also conducting research on technologies for “smart” power-supply networks, which make it possible to reduce carbon dioxide emissions into the atmosphere. But all of these and other technological solutions must be adapted to the needs and specificities of our country, explains Erik Oldmark, vice president of the company’s marketing strategy in North Europe and Central Asia.

Ericsson plans to begin this work in collaboration with Russian colleagues in the Innovation City. If all we needed was to develop and build mobile networks, then we would be able to do without Skolkovo, explains Oldmark. The first results of the joint work of Russian and Swedish partners, he predicts, may become available in a year to a year and a half.

Partners have already been found to match one of the proposed Ericsson solutions with Russian standards, and a contract with them has already been signed. This pertains to a system which a person can use to call emergency services – firefighters, police and ambulance – by dialing one and the same number for all, 112. It will appear in the regions gradually as they become ready. The transfer should be completed across the country by the end of 2012.

In most countries today, the operations of the emergency services are organized in a way that a call about an incident is transferred from one service to another consecutively. Ericsson’s new development allows the operators of all the emergency services to take and process a call at the same time. As a result, they are able to make decisions faster, and arrive at the scene quicker. The acceleration by only a minute could save a city with a population of 1 million people up to €7 million a year, Puskaric said, citing the findings of independent researchers.