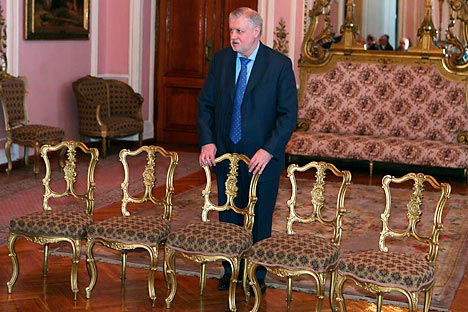 Ahead of December’s State Duma elections the biggest questions involve how the Kremlin will manipulate its parties, but can any of them inspire Russian voters?

Political parties aren’t held in high respect among ordinary Russians: According to some polls, even notoriously corrupt law enforcement agencies are more trusted by the public than the designated beacons of ideological creativity.  It’s no wonder then that the media coverage related to political parties normally doesn’t capture the public imagination.

But ours are not normal times. The election season is upon Russia: Duma elections are scheduled for December and the presidential vote will follow next spring.  Suddenly, even mundane political news becomes, well, newsworthy.

At any rate, the resignation of the chairman of the Federation Council Sergey Mironov from his leadership position at the Just Russia party, one of the four political parties represented in the State Duma, can’t be called a mundane event. Just Russia was created in 2006 as a pro-Kremlin project designated to erode the electoral support for the Communist Party (KPRF).  Today, everyone would agree that this promise hasn’t been fulfilled: Regarded as being too close to the authorities, Just Russia failed to attract the “traditional” KPRF voters. Instead of siphoning off the votes from the Communists, the left-of-center Just Russia seems to have had more success in taking away the left-leaning vote belonging to the ruling United Russia party. The reason for this apparent failure might have been Mironov himself: One of the country’s top three officials, he could not be viewed as a bona fide opposition figure by KPRF supporters.  Moreover, Mironov’s status as the chairman of the Federation Council fueled his personal ambitions, tempting him to position Just Russia as the country’s second “ruling party,” after United Russia.  Clashes between the two parties have become a permanent fixture of political life in recent years.  Many “edinorosses” have come to view Just Russia as their major political opponent rather than the Communists.

Yet, the need behind the creation of Just Russia has not disappeared; if anything, it may have become even more acute.  The consensus in political circles is that the rising prices of food and communal services are increasing the protest mood in the society.  Facing a growing protest vote, United Russia—as evidenced by its less than stellar performance during the recent regional elections—has begun to lose its core electorate.  Ever fearful that this protest vote will register in the KPRF poll columns, the Kremlin appears to be revisiting the Just Russia project.  The identity of the party’s next leader may indicate what the party’s future will hold.  If Mironov’s hand-picked successor, Nikolai Levichev, retains his position, this may mean the beginning of Just Russia’s end.  If, however, Levichev is replaced by a more charismatic and recognizable figure—the name of Dmitry Rogozin, currently Russia’s Ambassador to NATO, is often mentioned in this context—that would indicate that Just Russia has received a new lease on life.

The other political entity commanding intense media attention over the past few weeks is the Right Cause party.  The Right Cause represents the latest political party project undertaken by the Kremlin with an aim to piece together fragments of three now-defunct liberal bodies: the Union of Right Forces (SPS), the Democratic Party, and the Civil Force party.  However, it would be a stretch to call the project success.  Since its founding two years ago, Right Cause has been plagued by the lack of a unified ideological platform and paralyzed operationally by its three co-chairmen. Right Cause has no representation in regional parliaments and was never able to register more than a percentage point in any survey or rating.

Recently, rumors began circulating that the collective leadership structure will be scrapped and replaced with a single Vozhd, an influential federal-grade politician capable of re-energizing the sleepy party and leading it straight to the Duma.  A number of possible candidates for the Vozhd position have been presented by the rumor mill—Igor Shuvalov, Alexei Kudrin, Alexander Zhukov, and Dmitry Kozak among them—but at the moment, no final decision seems to be in sight.

Although the consensus is that as many as 10 to 15 percent of adult Russians can be considered as potential voters for a true liberal party (“right” in the Russian context), the reasons behind the renewed interest in the Right Cause—and its creation in the first place—have never been clear.  Equally important is the question of whether the appearance of such a party in the Duma will benefit or hurt United Russia.  On one hand, after the conclusion of the 2011-2012 electoral cycle, the Duma will have to make a number of painful—one could say “liberal”—decisions in the social sphere.  It is not clear at all if United Russia will be able to muster enough popular support for the unpopular reforms relying only on its own, largely paternalistically-oriented, voter base.  The presence in the Duma of a bona fide liberal party representing the highly educated, economically self-sufficient electorate could be of tremendous help in pushing these reforms through the parliament.  On the other hand, United Russia has its own group of liberal deputies—composed, incidentally, by the most experienced lawmakers—who may be tempted to bolt United Russia and join the Right Cause.

Unfortunately, time is quickly running out for the Right Cause to be repackaged into a viable political body for the upcoming December elections.  And that means that President Dmitry Medvedev’s liberal modernization agenda will have no political party support.  Moreover, should Medvedev run for re-election, he’ll have no other choice than to use United Russia’s election campaign machinery.  Although the “edinorosses” made it clear that they prefer Prime Minister Vladimir Putin as their presidential candidate, they will support Medvedev if told so by Putin.  But there will be price for Medvedev to pay for this support.