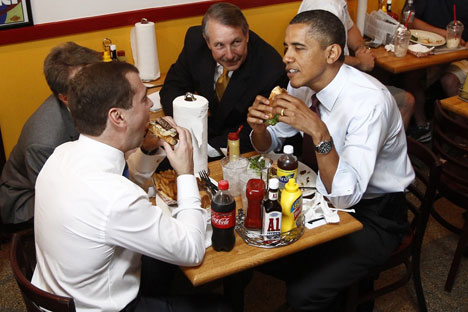 A lawsuit is attempting to force U.S. President Barack Obama to annul the notorious trade restriction.

A lawsuit has been filed in the U.S. District Court for the District of Columbia demanding the U.S. president annul the Jackson-Vanik amendment in relation to Russia. The plaintiffs argue that the amendment, which was passed during the Cold War, lost its significance long ago and is now a serious hindrance to bilateral trade. The plaintiffs believe claims that only the U.S. Congress can repeal the amendment are unfounded, arguing that the U.S. president can do this without waiting for lawmakers. Observers in Washington say the lawsuit is connected with an anticipated discussion in May on Russia’s prospects for joining the WTO.

The authors of the new project, aimed at a radical improvement in Russian-US relations, are Edward Lozansky, a former Soviet dissident and president of the American University in Moscow, and his long-time business partner Anthony Salvia, who headed the Moscow bureau of Radio Svoboda in the mid-1990s and is currently the executive director of the American University in Ukraine. “We want to prove that President Obama has a constitutional right to annul the Jackson-Vanik amendment without a vote in the U.S. Congress,” Lozansky said in comments on the lawsuit.

The Jackson-Vanik amendment, which was added to U.S. trade law in 1974, was the handiwork of Senator Henry Jackson from Washington state and Ohio Congressman Charles Vanik. The two legislators wanted to restrict trade relations with socialist bloc countries that were hindering the ability of their citizens to emigrate freely. The amendment was initially introduced in response to the Soviet Union’s attempts to make it as difficult as possible for Soviet Jews to emigrate. American lawmakers were outraged over rules introduced in 1972 that required all Soviet emigrants with a higher education to pay the government compensation for the cost of their university training. The amount of money demanded from them was enormous for those times: for a graduate of Moscow State University, for example, emigrating would cost more than 12,000 rubles – the cost of an apartment or several cars.

Jackson-Vanik, which was passed by a majority vote and signed into law by President Gerald Ford in early January 1975, denies most favored nation trade status and the allocation of government loans to countries that didn’t recognize the rights of its citizens to emigrate. The law also called for introducing discriminatory tariffs and additional fees on goods imported to the U.S. from countries with a non-market economy. As a result, Soviet exports were subjected to duties that were 10 times higher than normal.

Although the rules for emigrating from the Soviet Union were changed in the mid-1980s, the Jackson-Vanik amendment remains in force. In recent years, representatives of the U.S. administration have said on multiple occasions that they are prepared to begin the process of lifting the amendment in relation to Russia, but have added that only Congress can ultimately resolve this issue. Vice President Joe Biden was the most recent official to make this statement, promising during a visit to Moscow in March 2011 that annuling the amendment would become one of the top priorities for U.S. foreign policy.

Lozansky said the idea of appealing to a court appeared this year during the annual World Russian Form that he hosts in Washington. During a speech at the forum, Richard Perle, a former U.S. assistant secretary of defense and well-known neoconservative, stated that the Jackson-Vanik amendment actually has nothing to do with Russia. “Perle noted that the text of the law does not mention the Soviet Union or, obviously, Russia, and an amendment only needs to be made to the list of countries that fall under two criteria – the absence of a market economy and free emigration. Thus, there is no need for Congress to vote on annuling it since Russia, as a country with a market economy and no restrictions on emigration, should be automatically excluded from this blacklist,” Lozansky said.

By not repealing the amendment, the authors of the lawsuit maintain, Congress is contradicting logic, since the amendment prevents the U.S. from participating in voting on Russia’s accession to the WTO and, in the event Moscow is accepted into the WTO, prevents American businesses from using most favored nation status in trade.

“All those in favor of preserving the Jackson-Vanik amendment in relation to Russia are violating U.S. law. Moreover, President Obama is breaking the law since it is within his power to issue the corresponding order to repeal the amendment without voting taking place in Congress,” Lozansky said.

Bailey Gary PC, a small Washington,DC-based law firm, is representing the plaintiffs. The lawyers believe any victory achieved in court could be used during the upcoming debates on Russia’s accession to the WTO in May.

Michael Froman, deputy assistant to the president and deputy national security advisor, previously confirmed that Washington had not ruled out a scenario under which the repeal of the Jackson-Vanik amendment would precede a decision on Russia’s accession to the WTO. Froman said the U.S. administration considers repealing the amendment in relation to Russia part of its program for the year and suggested that a decision on the issue could be made “closer to Russia’s accession to the WTO.”

Dmitry Trenin, director of the Moscow Carnegie Center, told Kommersant that it would be unlikely for the problem of the Jackson-Vanik amendment to be resolved in the courts. At the same time, Trenin said the initiative taken by Lozansky and Salvia has taken on great importance because it is occurring within the framework of the efforts of the Obama administration, which has defined repealing the Jackson-Vanik amendment as one of its top priorities. In the event Russia joins the WTO and the Jackson-Vanik amendment has yet to be repealed, this will impact the interests of American businesses. Therefore, U.S. companies should actively lobby for the amendment annulment, and the Lozansky-Salvia lawsuit will create the kind of informational background needed for such lobbying, Trenin said.