Putin calls for doubling labor productivity in the next decade 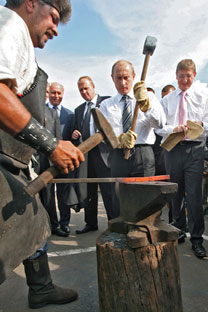 Russian Prime Minister Vladimir Putin threw down the gauntlet to the government during his annual report to the Duma at the end of April, calling for a doubling of labor productivity over the next decade.

If the Russian government can pull off this trick, then it would double the size of the economy at almost no cost. Russian productivity is a third of that in the United States, but consulting group McKinsey found in a report last year that between 60 and 80 percent of the gap is due not to the weather or lack of power stations, but just bad management.

“Russia needs to become a genuinely competitive country. This is a basic requirement for its government, businesses and social institutions. If we look at labor productivity, in Russia it is much lower than in leading economies,” Putin said. “At the very least, we have to double it over the next decade, perhaps even raising it three or fourfold in key industries.”

It is a long overdue policy priority. The OECD highlighted the low productive of emerging eastern markets as one of the main problems facing the governments in the region in a report this April.

"The capacity of fiscal and monetary policies to further support the recovery is pretty much exhausted, so a new emphasis on implementing structural reforms is the only way to boost growth and job creation," said OECD Secretary-General Angel Gurría at the presentation of the “Going for Growth” report.

In the past, the Kremlin has largely focused on the need to boost investment as the main policy theme to boost economic growth. But the switch to increasing productivity focuses efforts on a more fundamental economic goal. A study several years ago by Swedish economic institute CEFIR found that while investment into the state-owned gas monopolist Gazprom has been rising every year, the productivity of the company has been falling.

“The U.S. sustained a long productivity boom due to its innovation. Britain did it via liberalization. Emerging economies will soon have to start innovating for themselves,” said Plamen Monovski, CIO of Renaissance Asset Managers.

Putin’s remarks are drawn from the Strategy 2020 report, which he commissioned and lays out his long-term economic blueprint.

The state has begun the process of improving the quality of management in Russia. The government has thrown its considerable resources into setting up the Skolkovo business school to train the next generation of Russian CEOs. The second plank of the program is to promote high tech and innovation. Putin said the share of innovative production in the country’s total production over the next decade will increase from 12 percent today to 25 or 35 percent.