VTB takes over Bank of Moscow 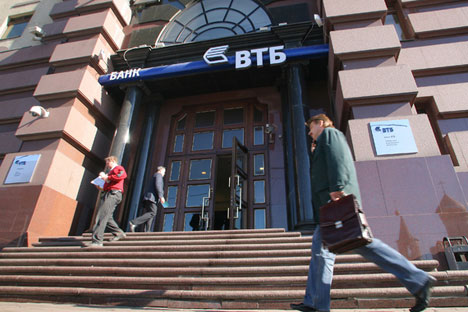 The state expands its control over the banking sector with the addition of Yury Luzhkov's former bank.

Already the second biggest bank in Russia, state-owned VTB Bank improved its position further in April by taking over the Bank of Moscow, the country’s fifth largest commercial bank. Some analysts worry that the deal increases the state’s share of Russia's banking sector, but others say it will reduce corruption.

The Bank of Moscow was set up in the mid-1990s as the pocket bank for Moscow's City government. However, following Moscow Mayor Yuri Luzhkov's ouster last September, the bank's future was uncertain.

In November, the Kremlin made a move. Deputy Prime Minister and Finance Minister Alexei Kudrin announced that VTB was interested in buying the bank. VTB Bank’s VTB-24 retail operation is already a leader in providing consumer credits and mortgages, and adding Bank of Moscow 500-plus branches would put VTB into a league of its own, just behind its sister Sberbank, which has the lion’s share of Russia’s retail banking business.

But the deal did not go gone smoothly. At first, Bank of Moscow management said they were willing to sell their 20.3 percent to VTB, but then in March they brought a legal case to block VTB's purchase of a small stake from America's Goldman Sachs and announced a rival bid for the city of Moscow’s stake.

Bank of Moscow President Andrei Borodin also found himself implicated in a $440 million corruption investigation into the sketchy loans made to a property company controlled by Luzhkov's wife, Yelena Baturina. When he was called in for questioning in April, Borodin fled to London and checked into a hospital for treatment. A week later, he agreed to sell his stake at what analysts report was below market rates.

"It is clear what actually happened," said one banking source. "The old management were not happy with being pushed out of the bank and were holding out for a high price for their stake—a price VTB was not prepared to pay. So the management tried to play hardball, but bit off more than they could chew."

The VTB takeover significantly increases the state’s share of the banking sector and follows closely on Sberbank's takeover of Russia's leading investment bank Troika Dialog in February. Both banks have become noticeably more aggressive in building up their business following the 2008 crisis. Several foreign banks have already pulled out of Russia because of the growing competition; the latest was HSBC, which announced on April 26 it was abandoning a two year-old drive to build up a retail operation in Russia.

"The recession was tougher for foreign banks that have only operated on the Russian market for a few years than for foreign banks that had established themselves in the early 2000s during the period of rapid economic growth. Latecomer banks were hit hardest by the recession as they failed to sufficiently increase market share to weather the crisis," said Seija Lainela, an analyst with the Bank of Finland.

The Kremlin said that the increase in its share of the bank sector is temporary and that it is powerless to prevent it.

"Technically this deal has increased the state's share in the banking sector, but the plan is to sell the state's shares in [VTB and Sberbank] and increase the competition in the sector. The other side of the coin is the state can’t restrict Sberbank's place in the market, as how can we say to the minority shareholders there is a cap on the bank's ability to compete?" Arkady Dvorkovich, economics aide to president Dmitry Medvedev, said in an interview.

And the state has been busily selling shares in both banks. VTB group raised $8 billion with an IPO in May 2007 by selling a 22.5 percent stake, and the bank sold another 10 percent in February, raising another $3 billion. The state has said that it wants to sell another 10 percent as soon as possible. Likewise, the government owns 60.25 percent of Sberbank, and shortly after the purchase of Troika Dialog, Russia’s National Banking Council signed off on a decision to sell another 7.58 percent to the public—probably later this year.

Investors are happy to see both banks growing in size and power.

"One the one hand, the state is making it more difficult for private banks to operate, but on the other, we are starting to see the beginning of badly needed consolidation in the banking sector. Taking over banks that are clearly not run on commercial lines but for the benefit of their owners is all said and done a good thing," said Roland Nash, CIO of Verno Capital.