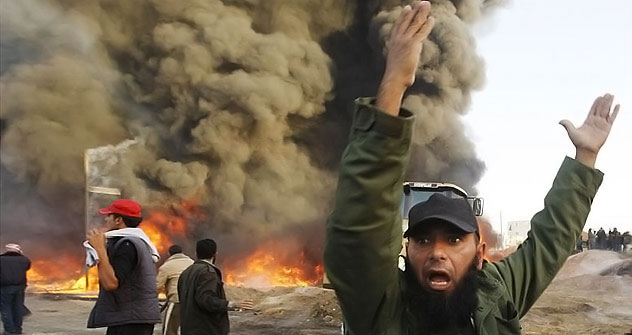 The Caucasus, the Middle East, Central Asia, Asia-Pacific - these regions command the attention of military experts and diplomats. Where are the geopolitical fault lines in today's world, and where can we expect military conflict tomorrow? How likely is a third world war, and will it be a nuclear war? How can we prevent the destruction of civilization? These were among the questions addressed by experts at the round table discussion "Military Concepts and Challenges of the 21st Century," organized by the magazine Mezhdunarodnaya Zhizn (International Affairs), and held at the Moscow State Institute of International Relations on April 26.

Before one can talk about the likelihood of armed conflict, one should define what armed conflict consists of in today's world. The average person thinks war is tanks and airplanes. But wars come in all shapes and sizes.
At the round table, First Vice President of the Academy of Geopolitical Problems Konstantin Sivkov said that armed conflicts are classified by Russia's Institute of Military-Strategic Studies according to causes, geography, duration and the number of troops involved.

At the low end of the classification system are border conflicts that last from a week to a month, requiring about 10,000-50,000 troops.

Next come armed conflicts involving about 100,000 and lasting from a month to several years.
This is followed by local wars, which involve at least one million troops (incidentally, this is the projected size of the Russian armed forces after the reform process) and last from several months to several years.

A regional war involves 5-6 million people. The Great Patriotic War (i.e. the Eastern Front of WWII) falls into this category.
Finally, at the other extreme of the classification system is the world war. "In terms of its structure, a world war can involve a number of regional and local wars and armed conflicts, or simply local wars and armed conflicts in a considerable portion of the world's territory," Sivkov explained.

Based on a similar taxonomy of armed conflicts and existing disputes in the world, military experts predict probable threats. It is important to emphasize that this is just a long-term forecast. There are no predictions about exact dates or any guarantees that these events will come to pass.

"Existing disputes show that there is potential for war," Sivkov said. In his opinion, there is a fifty-fifty chance of a local war in the Middle East (the military operation in Libya being a vivid example). Experts cannot rule out that the United States will opt for a military strike against Iran, although most likely it would not initiate the war but rather would be part of a NATO peacekeeping force operating in highly probable conflicts between Iran and Israel or Iran and Saudi Arabia. "In any event there will be a showdown between Iran and the United States sooner or later," said Grigory Tishchenko, head of the defense policy department at the Russian Institute of Strategic Studies.

Armed conflicts could break out in Central Asia, drawing in Russia, who will act in support of its allies in the region.
Head of the Military Forecast Center Anatoly Tsyganok believes that "a conflict over water is possible in the region in the next three to five years." Tishchenko noted that "a change in the region's leaders" is just around the corner. "It is quite possible that this process will not be peaceful, all the more so since Central Asian countries already find themselves in a conflict over the Fergana Valley, which is the region's only bread basket," he explained, adding that "the Afghan conflict could also spread to Central Asia."

Speaking about Russia's neighbors, Tishchenko noted that the situation in Transdnestria could escalate. "It is difficult to predict the consequences of the current Romanization of Moldova. For instance, the EU is already willing to introduce its peacekeepers in Transdnestria but its troops have not yet proven themselves anywhere. It is very hard to say whether they will cope with a possible escalation in Transdnestria," he explained.

Armed conflict is also likely in the Caucasus. "No doubt, Nagorno-Karabakh may become a bone of contention," Tishchenko said. "Azerbaijan is actively developing its foreign policy concepts and building up troops. Armenia, where we have a military base, is acting in the same manner." Tsyganok added: "The most interesting aspect to this is that Russia has no dispute with either Azerbaijan or Armenia, and we don't have a clue as to what we will do if tensions in Nagorno-Karabakh spill over."
Sivkov believes that an armed conflict or local war is also likely in Asia-Pacific, in particular between Cambodia and Thailand.
In his opinion, similar local conflicts in different parts of the world are the result of a changing world and the formation of a new world order. "There is no case in history of a new world order taking shape without a war," Sivkov said. "A new world order came into being twice - in the early 20th century as a result of WWI and in mid-century as a result of WWII," he explained.
Is war inevitable?

With time, humanity has learned how to resolve conflicts more or less peacefully. But a conflict-free world is a utopia. Disputes between countries are inevitable, just as they are between people. Now experts identify three types of disputes or divisions that can provoke armed conflicts at different levels.

First there are internal divisions within a state, which are primarily caused by two factors. The first is socio-economic in nature (divisions between the upper and lower classes over the distribution of material wealth). This division becomes acute when the incomes of the wealthiest 10% exceed those of the poorest 10% by more than 15 times over," Sivkov said, adding that in Russia this threshold has long been passed.

The other factor is ethnic, cultural and religious tensions, which can be found in Russia and other countries, particularly in the United States.

Then there are regional disputes, for instance the territorial disputes between Russia and China, China and India, Russia and Japan, India and Pakistan. There are internal divisions in the Arab world, between Iran and the Arabs and between North and South America. Such disputes could easily boil over into regional conflicts.

Finally, there are global divisions, first among them being the division between the scale of production and consumption and the Earth's resources that are left at the disposal of humanity, which puts at stake the entire direction of civilization's development," Sivkov said. He believes that this division is antagonistic because it can only be resolved by one of two options - either by restricting consumption or by changing the social system.

The second division is caused by the disproportionate distribution of production capacity and raw materials. "Some countries have high tech production, whereas others are rich in raw materials. The inadequate exchange between them is enriching some and impoverishing others," Sivkov explained. "There are two ways of resolving it - either leave some countries in a subordinate position or establish a fair distribution of revenue, which will impoverish other countries without changing their social system."
The third global division that is playing an increasing role is between "the immorality of the free market and the spiritual values of traditional civilizations - Muslim, Orthodox Christianity and others," Sivkov said.

Finally, there is the division between the "financial bubble" and the real economy. "This division played a significant role in Hitler's rise to power in 1933. This is why Henry Ford kept a small bust of Hitler on his desk," Sivkov said. "This is the division between financial and industrial capital, and to resolve it one form of capital must be subordinate to the other."

None of the experts at the round table believe that any of the world powers is likely to launch a premeditated aggressive war, including a nuclear attack. Fortunately, not only civilized countries but the rest of the world understands the consequences of such a war.

However, a new world war could start uncontrollably, as a "natural escalation of local or regional conflicts into large-scale hostilities," Sivkov said, adding that the likelihood of such a war is low. The use of weapons of mass destruction would be the final stage of such a global war.

If unleashed, a new world war would have catastrophic consequences. In his time, Winston Churchill cautioned that "the Stone Age may return on the gleaming wings of science." Now experts are more specific. They maintain that a new world war could last from 6-7 to 25-30 years and involve more than 100 million people on both sides. The aggregate human losses could exceed several hundred million.

Experts emphasize that the forecast of probable armed conflicts is important not so much as a means of preparing national armies for hostilities. Militaries have long ceased initiating wars. Only politicians or "captains of the economy," as Sivkov put it, are capable of preventing the unavoidable divisions in the world from escalating into a world war.