Improving neonatal care, one text message at a time 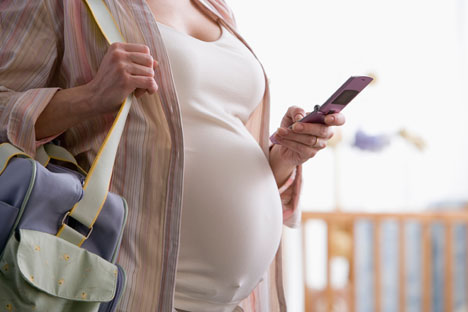 Already a success in the United States, Text4Baby comes to Russia in hopes of improving care through mothers’ mobile phones.

Russia has experienced a baby boomlet, thanks in part to the 2007 legislation introducing the “mother’s capital”— a cash payment to women who have more than one child. Russia’s birth rate has increased 21 percent since 2005, and in 2009, the population increased for the first time in 15 years. The government also launched an initiative to modernize maternity hospitals. It is clear that encouraging more births is an important part of the government’s plan to combat the country’s falling population.

What happens, however, when the baby comes home?

Enter Text4Baby. This program, pioneered in the United States, targets women who might otherwise not have access to the best healthcare information. Mothers who sign up for the text message service receive three texts per week containing information on topics such as pre-natal care, immunization and car seat safety.

The program has been hugely successful, with more than 135,000 subscribers in the United States in the first year alone. This success has led to a bilateral collaboration bringing the program to Russia. Text4Baby is scheduled to launch in Russia this September.

Russia proved an attractive market for the program’s organizers because it has some of the greatest levels of mobile phone penetration in the world, and the project has attracted strong support from inside the Russian government. Experts from the Kulakov Center—part of the Ministry of Health and Social Development—will take a leading role in developing the text messages.

Judy Twigg, an expert on health and healthcare reform in Russia and a professor at Virginia Commonwealth University in Richmond, Va., stressed that education and communication are crucial for better care in Russia. “Public health information, education and communication are the critical things, important, if not more important, than just changing the healthcare system in isolation,” she said.

Organizers said that Text4Baby underscores that direct communication with mothers, who often make health decisions for the entire family, increases the likelihood that they will make healthy choices.

There are challenges to implementing the program. Coordinating the involvement of governmental and non-governmental organizations has been difficult. Language experts were also needed to reduce long and complicated Russian phrases into short but coherent text messages. Elena Dmitrieva from the Health and Development Foundation (HDF), which is heading up Text4Baby in Russia, stressed that one difficulty was trying to encourage Russian doctors to improve their counselling skills and to take a more “hands on” approach. Patients also need to change the way they approach the doctor’s office. The HDF hopes Text4Baby “will open a new era of patient-doctor relationships where the client is no longer a silent patient who sits passively listening to a wise doctor, but will come with questions,” Dmitrieva said via e-mail.

Text4Baby also has the potential to bring Russians and Americans together. In the words of Judy Twigg, the project “is one of co-equals discussing a common challenge.”