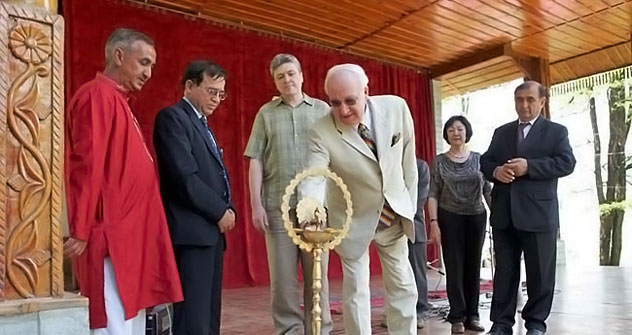 Ambassador of Russia to India Alexander M.Kadakin (right) is taking part in the laying of the foundation stone of the future Roerichs’ International Academy of Arts. Source: www.rusembassy.in

On May 1, 2011 the Roerichs protected estate in the Kullu valley saw the laying of the foundation stone of the future Roerichs Academy of Arts. The solemn ceremony became the central event of the traditional Russian-Indian festival which is held twice a year in Naggar in the Western Himalayas by the International Roerichs’ Memorial Trust (IRMT).

The chief guest was Ambassador of Russia to India Alexander M.Kadakin, the vice-president and a life trustee of the IRMT. The celebrations also saw the ambassadors of the CIS countries: of Kyrgyzstan – H.E. Mrs I.A.Orolbaeva, of Tajikistan – H.E. Mr S.B.Saidov, of Ukraine – H.E. Mr A.D.Shevchenko. Mr P.Sharma, director of the Department of Culture, Literature and Arts of the Government of Himachal Pradesh, top officials from the Kullu district, prominent intellectuals, artists, performers, scholars, teachers, numerous journalists, local people, Indian and foreign tourists came to take part in the festivities.

As the established practice goes, the day started with the collective Shanti puja – the prayer for peace. In the shadow of the 400-year old deodar, a witness of the Roerichs’ family, by the statues of protecting gods of the Kullu valley, the sacred fire was lit and Sanskrit mantras and moving words filled the air, calling for well-being, prosperity and peace for the peoples of Russia and India, for this blessed place and the entire planet.

The national flags of Russia, India and the Roerich’s Banner of Peace were hoisted on the flagstaves near the house-cum-museum of the outstanding family. The personal exhibition of Mr A.Isaev, a famous Uzbek artist from Samarkand, titled “The soul of the Himalayas”, evoked keen interest among the gathering. Over 30 works on display were created by the master during the last month spent in Naggar.

On the mountain-side near the Urusvati Himalayan Research Institute the laying of the foundation stone of the future Roerichs’ International Academy of Arts took place. The first stage envisages erection of two buildings designed in keeping with the traditional architectural style of the Himalayan Kullu valley. The money from the grant of 1 million rupees allotted by former Prime-Minister A.B.Vajpayee who in 2001suggested the idea of establishing the Academy, will be spent for this purpose.

According to the plan, approved by the IRMT Board of Trustees on March 25, 2011, the Academy will include a general education school with an artistic bias and a College of Arts. The first students will be from the Helena Roerich Arts College where for several years by now Indian children learn classical music, singing, dancing, painting, wood-craving and weaving.

While inaugurating the festival in the Green Theater under the sacred deodars, Mr P.Sharma said that “the people of Himachal Pradesh are proud that their home state is closely connected with the name of the eminent Russian artist, traveler, scholar and philosopher Nickolas Roerich”. “The IRMT mission has a tremendous significance for the cultural development of the entire region”, he stressed. “This laborious work is aimed at preserving the priceless heritage of the human civilization for the coming generations – the spiritual, scientific and artistic legacy of the great Russian family who made India their second home”.

In his address the Ambassador of Russia to India reminded that “some 20 years ago, when the Trust was established in the presence of Svyatoslav Roerich, the estate was known only to a handful of educated intellectuals who would occasionally visit Naggar. Nowadays it has blossomed into one of the most attractive tourist spots in Northern India”, he emphasized. “Annually it is visited by almost a lakh of pilgrims seeking beauty”.

Alexander Kadakin stressed that the Russian Side would bend every effort in order to convert the protected estate into the genuine “shaan of Himachal”, a world-class cultural, educational and research complex.

The audience heartily congratulated Dr Alena Adamkova from Slovakia, the Executive Director and Curator of the Trust and the Roerich Museum, with decoration with the high Russian Order of Friendship.

The guests were presented with the release of two books – the collected articles by Nickolas Roerich titled “Invincible” just published with the support of the Russian Embassy in India, and “Agni Yoga” by Helena Roerich published by the Italian Roerichs’ Society, whose representative Ms Ursula Rev while presenting the book to the IRMT conveyed warmest greetings to the participants and guests of the celebrations.

The gathering was treated with a great concert programme featuring colourful and authentic items including songs in Hindi, Russian, Italian, Ukrainian and Spanish languages by the students of the Arts College. The audience also appreciated the talent of performers of Indian classical music and dance.