Why best grooms are from India? Russian feminist unravels... 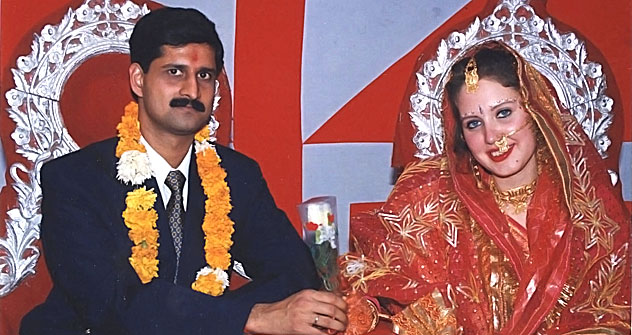 Ajay himself picked a red velvet traditional Indian dress for Elena. She was pleasantly surprised when the dress fitted perfectly and even decided to break with the Russian tradition of wearing a white dress at her wedding. Photo from personal arch

“The best grooms are from India.” This is not the tagline of some Indian matrimonial agency, but the much-publicised view of writer and publicist Maria Arbatova. A few years ago, she created a bit of splash by declaring with panache that “it’s time to start importing grooms from India to Russia.” She returned to her favourite theme recently at a workshop in Estonia titled, “How not to be Alone,” sparking renewed interest in the desirability of Russian women marrying Indian men.

Arbatova, famous for the television talk show “I Myself” in the 1990s, should know better. She has been married to an Indian for several years. It’s her third marriage, and she glows when she says it’s the happiest one. Shumit Datta Gupta, a financial analyst who speaks excellent Russian, has already been living in Russia for more than 25 years. Arbatova is his second Russian wife.

“My husband has undoubtedly retained all the best traits of a true Hindu. He is open, considerate, religious while having a degree in physics and generous while working as a finance manager,” says Arbatova. “In many ways, he is stronger than me on the inside. Shumit looks very gentle on the outside, but if he’s made a decision, it’s useless to argue with him about it.”

Above all, Arbatova appreciates Indians for their gentle, humane qualities. “Indians love anyone who is accommodating, but they especially love children. In Russia, Jewish people are considered the most caring fathers. Compared to Indian fathers, the Jews are simply callous, cold egoists,” says Arbatova. “In terms of character, there isn’t anyone in the world closer to us than the Indians. They are just as open, lazy and dreamy.”

The demographic crisis in Russia and the badly skewed sex ratio –- there are more women in Russia than men -- have lent her pet idea about importing grooms from India added credibility. “Indian men are a better match [for us] because they’re closer to Russians emotionally. Besides, the success of Indian soap operas in our country suggests a similarity in the idea of a family of Russian provincial girls and Indian suitors”.

Although Arbatova only talks about Indian grooms, many in Russia pitch for Russian women as ideal wives. “Russian women remain a dream and a lure, an infallible investment for overseas entrepreneurs, an invaluable export item and a major tourist attraction,” gushes Svetlana Kolchik, deputy editor-in-chief of the Marie Claire journal in Russia. “Why else would they dare to come to our cold and unpredictable lands? ... Russia still offers a unique gender relations ambience that combines the best of two worlds: an intriguing blend of emancipation and tradition,” she carries on in a poetic strain. We masquerade our incredible inner strength and endurance with a soft, at times very vulnerable, façade. It's part of our feminine mystique: we play it weak knowing we are perfectly capable. We encourage men to carry our bags, bring us flowers, fix our cars and even run the country.”

Poetic flights apart, the reality is somewhat more sobering. The number of marriages between Russians and Indians has never been particularly high, but it has always remained stable. Even back in the Soviet times, when there was a ban on marrying foreigners, the attitude towards marrying an Indian, as a citizen of a friendly state, was positive. After the fall of the USSR, the situation became much simpler.

In Moscow, for example, roughly 25-30 marriages with citizens of India have been registered each year for the last ten years, and this number is growing.

Cultural differences have not come in the way from romances evolving into Russian-Indian marriages. Take the case of Vivek and Irina, who met while studying at an institute of the Academy of Technology in a small city outside Moscow. Irina’s knowledge of India was limited to a few Bollywood films. Irina remembers how difficult it was for her to remember the names of her fellow Indian students since they sounded so strange to the Russian ear. Several years have passed, and now she is fluent in Hindi which she learned in the first four years after marrying Vivek.

Unlike Irina, Elena never had the opportunity to live in India for a long time and has never travelled there for more than a month. Her husband speaks Russian so well, however, that this is the primary language spoken in their family. Ajay learned Russian on his own. He came to Russia for work. Elena met Ajay in St Petersburg in 1998. She took an internship at a company where Ajay was the acting director. The internship ended, but Ajay continued to call her and ask for a date. When he decided to marry her, he travelled to India to receive the blessing of his parents. As a sign of consent, his mother gave him a golden chain for his future bride. Ajay himself picked a red velvet traditional Indian dress for her. Elena was pleasantly surprised when the dress fitted perfectly and even decided to break with the Russian tradition of wearing a white dress at her wedding. After signing their marriage papers in Russia, the newlyweds departed for their second wedding in India before settling for a while in Belarus.

For Vivek and Irina’s parents, it wasn’t a major shock that their children wished to get married. The couple had been dating for many years and their parents were already mentally prepared for their wedding. The first wedding was organised in Russia according to Russian traditions, while the second wedding was held in India in accordance with Indian traditions.

“There is a compromise in mixed marriages – we must learn from each other as the first few years are a grind. Then it becomes easier to live together,” says Elena. Her son Nicholas wears a chain around his neck, with both the sign of Om and an Orthodox cross.

“When he gets older, he will have the right to choose whom he identifies more with. For now though, we are observing the customs of both countries,” she says. “In our home, Orthodox icons sit side by side with the images of Hindu gods,” says Irina. “And our parents are fine with this.”

While living in India, Irina fully embraced Indian cuisine and stopped wearing all the clothes she had worn in Russia. Since Vivek’s family doesn’t eat meat or eggs, which are part of almost every Russian dish, all the recipes had to be borrowed from Indian cuisine.

Elena also came to like Indian cuisine. Armed only with a book called “Indian Cooking”, she wrote down all the necessary ingredients and asked her husband to buy them. It did not quite work the first time, but she soon evolved into a master cook. Now, when they visit Ajay’s sister, people make special requests for her to cook something because everyone loves her cooking.