Pre-trial agreement being made with corruption 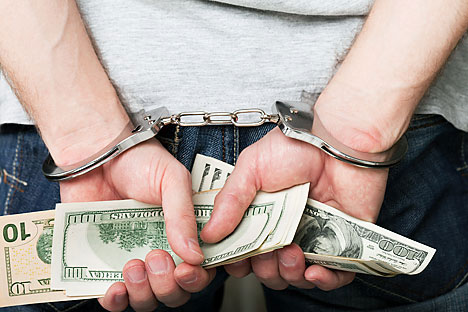 President Medvedev has introduced a legislation amendments draft in the State Duma aimed at creating a fully-fledged system of internal anticorruption control in the governmental authorities, after unsuccessful attempts at ratification of the UN anti-corruption convention in 2008. Limiting state officials’ bank secrecy, spreading prohibiting laws’ effect on the Interior and Defense Ministries, state corporations and even state stock companies, recognizing spouses of officials’ children as their family members, prohibiting any kind of non-material gifts, and introducing a two-year job restriction after leaving public service are among the projects’ ideas. Though the project does not reject criminal prosecution of corruption in court, the Kremlin is still not ready to put a stake on it and public control.

On the 28th of April (source– kremlin.ru), the president introduced in the State Duma the draft of the law On Amendments to Certain Legislative Acts of the Russian Federation in Connection with Improving Public Anti-Corruption Management. A 75-page document is the biggest attempt after ratification of the UN Convention against Corruption in 2008 to create a sound uniform closed mechanism of corruption control. Though the project does not reject criminal prosecution of corruption, its idea is that the extended category of state officials will be fighting corruption inside a state corporation according to the rules given in the text in the first place.

The project contains a direct declaration of unifying ways of fighting corruption in the government agencies, anti-corruption obligations, prohibitions and rights of the officials and the equated. Amendments to the law On Countering Corruption will oblige officials working in the above mentioned regime to inform of facts of corruption (informers are promised state protection likewise witness protection program), conflict of interests, forgery of the income declaration, etc. Every state agency is obliged to create an anti-corruption unit subordinate to Human Resources.

Apart from the state civil service, state corporations and foundations are equated with the extended category of state officials as well as organizations and companies created to fulfill governmental tasks according to the government’s list (in other words there appears a possibility to spread the law’s effect on some state stock companies).

The unification refers to the Defense Ministry as well. Its officials will be subject to both prohibitions stipulated in the law On Countering Corruption and obligations and limitations of the law. The same is with public service in the Interior Ministry (only the law on the operation and search activity may create exceptions). The right given to the Interior Ministry on the 22nd of July 2010 to create anti-corruption structures on their own conditions is being revoked. According to the law, governors are equated with members of the Russian government from the limitations viewpoint. Publicly working anti-corruption committees will be created in the State Duma, the Federation Council and regional parliaments, where it is possible to non-anonymously file a claim about a deputy violating the norms of declaring income or of the law On Countering Corruption. Such claims are to be discussed publicly in presence of information organizations at the sessions. The law’s limitations will spread over municipal service. All civil servants and the equated are obliged to file property and income declarations in the same way as the government members.

For the first time the notion of “relatives” is extended – an amendment is introduced in an article of the federal law On State Service which extends the ban on family-related subordination of spouses and their children, from now on it will be applied to the spouses of their children as well. This amendment, although bearing solely on the family-related aspect of state service, was designed to counter the most obvious consequences of the popular “dynastical marriages”, a practice widely spread among prominent state officials. And lastly, the amendment prohibits combining state civil service posts with the positions of state officials, in a number of cases this relates not only to state officials employed under a labor contract, but also counterparties to civil-law agreements.

Thus the extended category of state officials will be subjected to new means of control. The first and most important effect of the amendment is the rejection of banking secrecy for state officials. Amendments to the federal law On Banks and Banking Activities enable the heads of state bodies to obtain information on the state officials’ Russian bank accounts, as well as those of their spouses and children. The data will be provided on request by anti-corruption departments. This relates both to the state officials’ “entrance” income declaration, that is when they are candidates for a public post, and their annual declarations. According to other amendments passed to the Labor Code of the Russian Federation, the person who quits the “extended” state service is to keep his former employers informed about his new job for two years after his resignation, and moreover, the anti-corruption commission is empowered to forbid him to work in the new place if it judges there may be a conflict of interests (this decision may although be contested in court). It is not only prohibited to divulge official information to the new employer, the ex-state official is even not allowed to use it keeping the source secret. The law also gives the Federal Financial Markets Service (FFMS) access to information about the state officials’ clearing accounts at depository institutions, which helps to track their stock holdings and monitor their performance at the stock exchange. And the Federal Registration Service will be obliged to provide data on individual state officials’ real estate on request from competent state bodies.

The ban-list for state officials has been enlarged and updated. For example, the new version forbids any “nonmaterial” presents such as vacation trips, entertainment etc., the financing, even partial, by any legal entities and natural persons of business trips. It targets the White House practice popular in the late 2000s of flying around Russia and even abroad by business jets belonging to private companies. State civil official cannot carry out entrepreneurial activities now (earlier this limitation related only to those holding a public post). State officials are to place their assets under management. For unclear reasons it is severely prohibited to be member of the managerial bodies of Russian subsidiaries of foreign noncommercial organizations.

Amendments to the law On Investigative Activities introduced by the draft give carte blanche to both state authorities and police in executing checks on any kinds of activity of suspected corrupt officials, while earlier the same was only applicable to candidates seeking judge posts. Both the Ministry of Internal Affairs, directly, and top officials of the state authorities, via the relevant anti-corruption subdivisions, will now have the right to initiate an anti-corruption investigation, and the investigation reports will now “be used” to control the state officials’ work, as opposed to the previous version of the law having it at “might be used.” Also, not only the lawbreaker will be held liable for abusing the law On Countering Corruption, but also their senior officer who overlooked the committed crime.

The proposed system of punishment is emphasizing the “extrajudicial” nature of the new law. The judicial liability (including criminal punishment) is not ruled out entirely, yet the law’s inherent system of punishment sets its supreme penalty at “enforced resignation.” Going down on the gravity scale, the offence can be punished by “enforced dismissal” from the state office without resignation, a service incompetence note, a reprimand, or a warning. All the non-final penalties are to be annulled after 12 months, on the condition that no news ones are received, or even earlier if decided so by the seniors. Decisions to penalize can be challenged at court. Any state official may be suspended from the job for up to 90 days for the time of the anti-corruption investigation while remaining on payroll.

The draft also stipulates the right for any state agency to introduce more rigorous requirements and procedures by its charter, provided they pursue to benefit the state.  It also defines the state officials’ liability for disclosure of the confidential information received as part of the countering corruption process.

In addition to the above, the new draft gives more rights and authority to the Ministry of Justice in controlling the legislative activities of the authorities in order to ensure their non-corruption compliance. The Ministry obtains the right to perform an anti-corruption expertise (which may be followed by a veto) on all new amendments to the federal laws, and from now on complying with the Ministry’s assessment will be mandatory. Further, the Ministry will now be obliged to decline applications for registration of those legislative acts which are deemed by the Ministry, or its accredited experts, as infringing on the rights and freedoms of citizens, or introducing illegal changes to the “organization status” or inter-agency procedures.