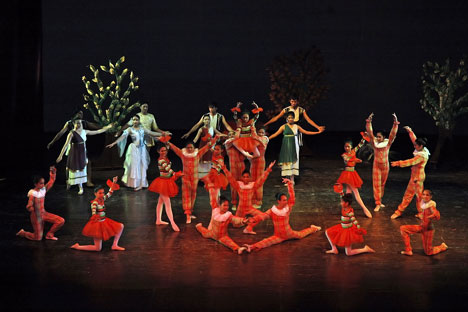 Galina Lyakhova: Every year-end concert is an absolutely unique and unrepeatable spectacle.

On 29 April 2011 students from the School of Classical Russian Ballet, under the auspices of the Russian Center of Science and Culture (RCSC), in New Delhi, appeared on the stage of the Indian capital’s leading concert hall Kamani in a dancing version of Shakespeare’s A Midsummer Night’s Dream. More than 150 children of nine nationalities ranging in age from five to seventeen took part in this performance. The head of the Russian ballet school, Galina Lyakhova, staged this well-known work using her original choreography, without simplifying the play’s plot. The only difference in Lyakhova’s staging was the addition of dozens of fairy tale characters, this having been dictated by the need to include every ballet student in the school in this gala year-end performance.

Lyakhova’s ballet featured not only new choreography, but also new music and costumes. To Mendelssohn’s music, she added musical compositions from antiquity in contemporary arrangements. Meanwhile, the costumes were sewn by professionals according to designs by G. Lyakhova, who took into account children’s love of magic and fairy tale phantasmagorias, on the one hand, and, on the other, the manners and customs of an Indian audience unaccustomed to overly revealing dres

The main female roles were performed by the school’s best dancers. The role of Hermia was danced by Sasha Shetti, that of Helena by Tara Devi Roy, and that of Titania by Zingrin Moa Yun. All three girls have studied ballet at the Russian school for five to seven years. For the school’s very littlest students performing in this three-act ballet, other roles were found: such as the prince of the elves, the mustard-seed fairy, the little stream, the sweet pea, the spider’s web, the ladybird. The principal male roles were performed by students from the Russian Language Institute (also under the auspices of the RCSC) who had specially prepared for this MidsummerNight’s Dream by taking intensive ballet lessons over a period of seven months.

The 90-minute performance was organized on a very high artistic level. A group of Indian specialists helped apply the children’s make-up and manage the costume changes. After the concert program, the school’s best ballet students received commemorative souvenirs and flowers.

The head of the School of Classical Russian Ballet (RCSC), Galina Lyakhova,

The School of Classical Russian Ballet (RCSC) has existed in New Delhi for nearly 30 years, since 1982. For the last eleven years the school has been run by a professional pedagogue and choreographer from Volgograd, Galina Lyakhova. As in previous years, the nearly 1,000 spectators gathered at the Kamani concert hall thanked the dancers and the choreographer with thunderous applause and standing ovations. Anyone else who would like to see the school’s Midsummer Night’s Dream is invited to look at the video recording. “With this cast and this staging, we can manage only one performance,” said G. Lyakhova. “Every year-end concert is an absolutely unique and unrepeatable spectacle.”

ElenaShtapkina is Head of the Department of Culture and Information, Russian Center of Science and Culture, New Delhi