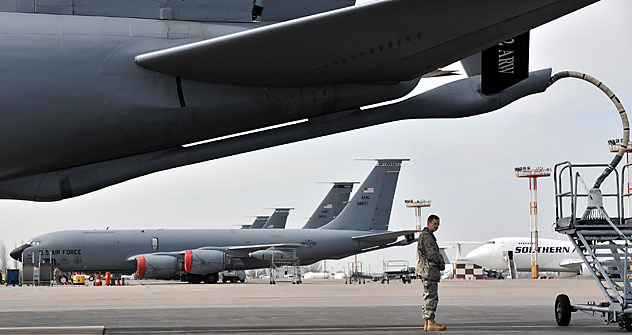 A US soldier stands near a plane bound for Afghanistan, as it fuels up at the Manas Transit Center some 30kms from Bishkek. Source: AFP/East News

Negotiating with NATO, but obligated to its CSTO partners, Russia may find itself between a rock and a hard place in Central Asia.

Recent events in the Middle East have pushed reports from Central Asia and Afghanistan to the back burner, but new conflicts between Russia and NATO are emerging in this region. After a year of negotiations between the United States and Kyrgyzstan over the opening of two new training centers, on Apr. 25, Kyrgyz Prime Minister Almazbek Atambayev announced that the opening has been postponed and that Russia might also be involved in setting up the centers. Atambayev also noted that the NATO Transit Center at Manas Airport would eventually be turned into a civilian transit hub. British and American media have presented these events as a fresh attempt by Moscow to push the Americans out of Central Asia.

The situation is interesting because, at the NATO-Russia Council (NRC) summit in Berlin on April 14-15, the sides agreed to improve their cooperation on Afghanistan. The summit participants endorsed an updated version of the NRC Action Plan on Terrorism. They also agreed to set up a fund to facilitate the training of ground personnel for Russian-produced helicopters in Afghanistan. The latest events in Kyrgyzstan, however, show that the two sides continue to have different strategic interests.

But there is a more serious problem behind these tensions. At the Lisbon summit on Nov. 19-20, 2010, NATO adopted a new strategy for Afghanistan. Its main components were stated as: 1) expanding the participation of NATO partners (from Armenia and Georgia to Australia); 2) promoting the establishment of the Afghan armed forces and conducting military operations; 3) developing a political dialogue between Hamid Karzai’s government and the opposition; 4) altering the format of the NATO peacekeeping mission in Afghanistan starting in 2014. More specifically, the International Security Assistance Force is to be withdrawn, while NATO auxiliary military units are to remain in Afghanistan. The Afghan government will be in charge of ensuring stability in the region.

For Russia, this scenario does not promise to be a very positive one. In 1992, Russia and several CIS countries signed the Tashkent Collective Security Treaty and in 2003, the Collective Security Treaty Organisation (CSTO) was set up, with the Tashkent treaty as its foundation. Russia provided extensive security guarantees to Central Asian countries, and now Moscow is concerned that implementing NATO’s Lisbon strategy will lead to a new regional war.

The involvement of CSTO in matters concerning Afghanistan has increased over the last eight years. The CIS Antiterrorist Center has been included in the CSTO structure; CSTO member nations annually hold operations to stop drug smuggling from Afghanistan; and CSTO has decided to deploy Collective Rapid Response Forces to act in crisis situations. On Jan. 20, 2011, Russia and Afghanistan signed an agreement on trade and economic cooperation, which envisions the supply of Russian military equipment to Afghanistan.

But there has been no dialogue between CSTO and NATO on Afghanistan. The CSTO leaders adopted a plan for cooperation with NATO on Afghanistan on Jun. 18, 2004. Similar proposals were made by then-Russian Defense Minister Sergei Ivanov in 2006, Foreign Minister Sergei Lavrov in 2009 and CSTO General Secretary Nikolai Bordyuzha in 2010. Two key areas of possible Russian-NATO cooperation were identified: combating the transnational terrorism network (including interaction among intelligence agencies), and the fight against drug trafficking. Yet, NATO and CSTO still do not officially recognize one another. NATO prefers to negotiate separately with Russia and the Central Asian countries.

There are three scenarios taking shape for Afghanistan’s future, none of which are advantageous for Russia.

The first is that NATO troops rapidly withdraw. The consequences would presumably be the return of the Taliban, the fall of the Kabul government and the escalation of military operations against Pakistan, all the way up to the Taliban breaking through to Pakistani nuclear sites. Tajikistan and Uzbekistan would be forced to protect the Tajik and Uzbek clans of Afghanistan or block attempts by the Taliban to support rebel Islamists on their territory.

Under the second scenario, the status quo would remain in place indefinitely. The result would be an expansion in drug trafficking. The CSTO would be forced to step up its own actions near the Afghan-Tajik and Afghan-Uzbek borders. The independent actions of the CSTO in Afghanistan would increase tension in the organization’s relations with NATO.

In the third scenario, NATO would intensify military actions in 2011–2013 with the goal of “finishing off” the Taliban. NATO would try to establish a dialogue with individual Central Asian countries, particularly Uzbekistan. Given the lack of coordination with CSTO, Moscow could perceive NATO’s steps as an attempt to cause a split in the organization.

Russian experts are increasingly getting the feeling that NATO’s policies in Afghanistan are intentionally unfriendly towards Russia. The withdrawal of NATO troops from Afghan territory could lead to a new regional war. In such a situation, Moscow would be faced with the difficult choice of either getting drawn into a war or failing to observe its commitments as part of CSTO.

Alexei Fenenko is a lead researcher at the Institute of International Security Problems of the Russian Academy of Sciences.