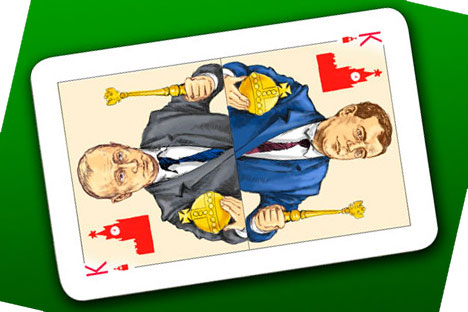 Political analysts in Russia and across the world are speculating on who will become Russia’s president in 2012. It seems like both current President Dmitry Medvedev and former president and current Prime Minister Vladimir Putin are doing all they can to keep tensions high. Recently Medvedev took time out yet again to address the election, saying he “doesn't count out the possibility” of running for a second term. At the same time, Medvedev made it clear that he and Putin have some differences of opinion on how the country should move forward. A few days later, Putin also made it clear that he “doesn't count out the possibility” of running for president and added that people shouldn't be getting so excited over the presidential elections.

Political commentators, nonetheless, are continuing to create a lot of hoopla, now discussing how Putin and Medvedev differ on any given issue. Given that both of them are coming out more and more often with conflicting viewpoints on various topics, there is plenty of room for discussion. To be fair, we should keep in mind that analysts are discussing differences that involve fairly minor issues.

The speculation swirling around Putin and Medvedev is fueled first and foremost from the peculiarities of Russian politics, which have been shaped over centuries. In contrast to a “lame duck” president in the United States, in Russia, a president coming to the end of his final term is not lame, but rather dead—and his corpse gets kicked around. Russian politics is traditionally dependent on a single leader. The country’s enormous bureaucracy is guided by this leader—his style, wishes, habits, whims, strengths and weaknesses—rather than by institutions, the law and written rules. As soon as the leader leaves or makes it clear that he is leaving, he ceases to exist.

Because of this situation, if Medvedev were to announce that he won't run for a second term, Russia would virtually be without a president for a year, until the next elections. Likewise, should Putin call it quits, the entire government hierarchy (already not very effective) would break down once and for all. Both men understand this perfectly well and don't want to take this kind of risk. Apart from that, each has his own political ambitions and visions for the presidential throne.

What isn't clear at all is how Putin and Medvedev perceived this situation unfolding when they laid the foundation for it in 2008. How did Putin plan for everything? Will Medvedev, in having kept the presidential seat warm, walk away from power by conveying that he will not run for a second term? There was something behind the rumors that Medvedev, having just assumed power, would resign from office to avoid a long existence as a lame duck, But then why would Putin discredit the institution of the presidency, which he did so much to strengthen and to which he presumably plans to return? Did Putin initially assume that he would serve as prime minister for a long time, but now being convinced that Medvedev is able to handle his responsibilities, wants to take a seat on the sidelines? If that's the case, then it isn't clear what a politician like Putin who is full of power fairly young, will do with his time.

And of course it's possible that the dual-leadership scenario and how to get out of it was not thought through to the end, or that life itself has thrown Putin and Medvedev a curve ball. What's also uncertain is whether either of them took into account the possibility of the electorate becoming tired of the same person being at the helm no matter how successful he may be? Today people demand progressive growth, daily news. And even should it be insignificant news, there should be change nonetheless. Just as people today want to see new episodes of a television series, politics needs to constantly have new themes. Recent polls indicate that 25 percent of Russians said that they would prefer seeing neither Putin nor Medvedev on the ballot in 2012. This doesn't mean that their ratings are a lost cause, but it at least goes to show that the public is thirsting for change.

One way to respond to this desire for change would be to have both men run for president. Then, rather than debating who will run, the main issue in Russian politics would be each candidate’s goals and plans for a new presidential term. Despite the myriad of worries, this would not cause a dangerous schism in the ruling elite and break it into two irreconcilable camps. Rather, it would provide relative stability to the entire system. A competitive election campaign between Putin and Medvedev, one focused on separate, insignificant differences of opinion (for they may not have any significant ones), will ensure the country's course for development as a whole will be safe, while at the same time preserving and relatively stabilizing Russia's social and political system.