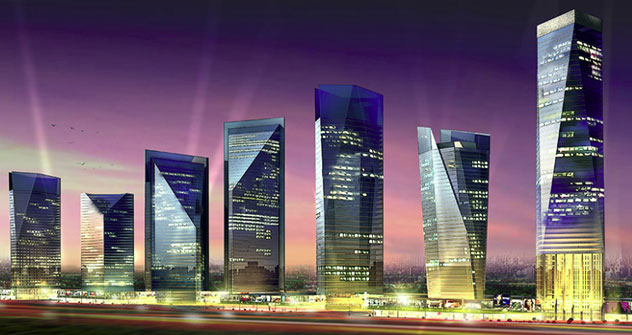 Astana, the capital of Kazakhstan

Why India, Russia and Kazakhstan need to join hands? Find out...

The relations between India and Kazakhstan, the oil-rich Central Asian state, go back to more than 2500 years and archaeological evidence corroborates the migration of Saka tribes from the present-day Kazakhstan to India’s northwest frontier.

Diplomatic relations between India and Kazakhstan were established in February 1992, soon after the Central Asian country got independence in December 1991. The visit of Kazakh President Nursultan Nazarbayev to India in February 1992 laid the groundwork for the new phase of ties between the two countries. Incidentally, India was the first country outside the CIS region Nazarbayev visited after Kazakhstan’s independence.

Soon after the dissolution of the Soviet Union, India reached out to the energy-rich Central Asian countries - Kazakhstan, Turkmenistan, Uzbekistan, Kyrgyzstan and Tajikistan. The resource-rich Kazakhstan soon became the cornerstone of India’s Central Asia strategy. Besides oil and gas, Kazakhstan is rich in uranium, gold, coal, manganese, lead, zinc, copper and chrome.

India now has one of the fastest growing economies in the world and a recent IMF study has projected India’s GDP growth at 8.25 per cent for 2011 and 7.75 per cent for 2012. If India is to continue on this growth trajectory, the oil-rich Central Asian region will play a crucial role. With the Iran-Pakistan-India gas pipeline project going nowhere and the Middle East becoming increasingly volatile due to political uncertainty, Central Asia could hold the key to India’s future plan for energy security. The landmark deal for the construction of the TAPI (Turkmenistan-Afghanistan-Pakistan-India) pipeline, which was signed in December 2010, has put the spotlight on the growing importance of this region for India’s future energy plans.

The  visit of the Indian Prime Minister Manmohan Singh to Kazakhstan on April 15-16 this year reinforced strong and friendly ties and led to the signing of a clutch of agreements between India and Kazakhstan. An agreement on cooperation in peaceful uses of nuclear energy, which was firmed up earlier, was the showpiece event of the visit.

Kazakhstan, which possesses 15% of the world's uranium deposits, is going to be increasingly important to India, which has ambitious plans to ramp up nuclear energy production in the times to come. India, which produces only around 3,700 Mwe of nuclear power, plans to increase it to 20,000 MWe. Kazakhstan’s importance for India has increased after Australia, which holds almost 40 per cent of the world’s uranium deposits, refused to give uranium to India till India signed the Nuclear Non-Proliferation Treaty (NPT).

Manmohan Singh's visit also saw the signing of a joint oil exploration deal between India’s Oil and Natural Gas Commission-Videsh (OVL) and the Kazakhstan’s KazMunaiGas, which will give ONGC-Videsh a 25% stake in the Satpayev oil block in the Kazakhstan sector of the Caspian basin.

Against this backdrop, India has been wary of China’s attempt to cosy up to Kazakhstan. That’s why New Delhi is trying to leverage its cultural and popular links with Kazakhstan and the Central Asian region. In Bollywood, India has a trump card which China does not possess.

Kazakhstan also has a lot to gain from a close partnership with India. For one, it has sought India’s help in its bid to join the World Trade Organisation (WTO). Given India’s growing clout in the international arena, Manmohan Singh’s visit to Kazakhstan also served to validate President Nazarbayev’s recent re-election to the post of president, which was held earlier in April.

Besides, there is tremendous scope for cooperation between India and Kazakhstan in areas like agriculture, public health, information technology, education, culture and defence.

Russia has been a time-tested ally of both India and Kazakhstan. India, Kazakhstan and Russia, therefore, will have to work together in unison to realise their common interests.

Dr. Rupakjyoti Borah is a Senior Lecturer at the Department of Geopolitics and International Relations, Manipal University. He was a Visiting Fellow at the Centre of International Studies, University of Cambridge, U.K. in 2009.

The views expressed in this article are the author's personal and may not necessarily represent those of Russia India Report.