The cranes are flying 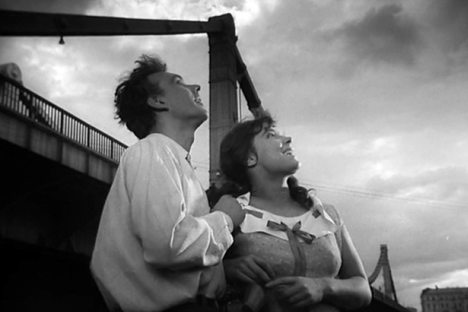 The Cranes Are Flying is a Soviet film about World War II. It depicts the cruelty of war and the damage suffered to the Soviet psyche as a result of World War.

The Cranes Are Flying shot in the Soviet Union depicts the cruelty of war and the damage suffered to the Soviet psyche as a result of World War II. It was directed at Mosfilm by Mikhail Kalatozov in 1957 and stars Aleksey Batalov and Tatiana Samoilova. It won the Palme d'Or at the 1958 Cannes Film Festival, becoming the second of two Soviet films to win the award.

It seems to me sometimes that all the soldiers,
Who never came from battles of the war,
Were not just laid into the dirt, but
Were turned into the cranes as white as snow.

So they are flying ever since those ages.
They call for us and may be that is why
The voice of them is full of burning sadness
And we keep silence looking into sky.

The flock of cranes is flying slow and sadly
Through colors of a sundown. I can see
That there is a gap between them, may be
It is a spot that's meant, my friend, for me.