A gateway for Indian products to Europe 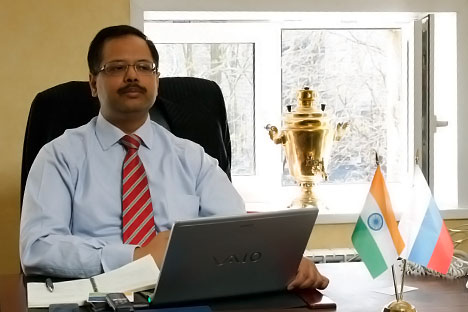 When did you become the head of the industrial park and what are your achievements?

The techno park is three years old and I have been its head for less than a year. It was created on the foundation of old industrial giant  Slavich, our other techoparks are in Krasnoyarsk, Moscow  and Krasnodar Region, I brought international standards to all of them. We introduced the Plug and Play system so that any investor can get ready to use industrial and work places at once. Resident can come with his equipment and start production at a very short time. The park is attached with Railway Road and already has its own customs terminal and Custom ware house. As a co-investor we started investment in the modernisation of infrastructure and investment in power and heat generation which is back bone of any industry. We have signed an agreement with  the local administration to get our resident tax benefits under cluster. I think the international standard Industrial park and one window clearance simplifying bureaucratic hassles, will help investor to effectively realise the project in short time and help government to make modernisation of industry and produce innovation products and generate jobs and wealthy taxes.

Are only Russian companies present in the industrial park?

No. Among the foreign companies, there are Kodak, SunChemical and Nordenia. We are currently negotiating with several American companies to establish a base for methanol production in our cluster. In last December we signed a contract with a major Indian company on the production of a Master batches , 80% of which will be used by the production facilities that operate in the techno park. An agreement has been signed with JSC Kraspharm, a major Russian pharmaceutical company. It will produce physiological solutions using the park’s facilities. The local university is training personnel for the pharmacological industry.

Where are the cluster’s products sold?

The bulk of the cluster’s products are sold in Russia. But the cluster is potentially very interesting for Indian and other investors, because Russia is a member of the Customs Union with Kazakhstan and Belarus, which means that the goods produced here can be sold duty-free to these two countries, These are also large markets. Also, Europe has imposed quotas on many Indian products. The Russian clusters make it possible, without much raising costs, to increase supplies of Indian products to Europe as after producing the goods here they are considered to have been produced in Russia. One should also keep in mind that with the economic situation in the world, our presence in the fast-growing Russian market is a big plus to an Indian company’s credit score. Europe and America are experiencing economic problems, while the Russian market is vast and one can start a greenfield business and capture the local and export market. I just wish to share as per FDI Russia remained the No.1 target country for investment directed into emerging Europe and ranked sixth worldwide, behind the U.S., China, the U.K., India and Germany.

Where do you recruit your personnel?

Most of the employees are former Slavich workers. They are skilful. Bringing technical persons by investor can be made possible. There is a vocational school that trains a new generation of personnel.

How has your career shaped up in Russia?

I started my carrier with a multinational Chemical trading & Manufacturing Company. In 1997 started our own venture in different sectors of Industry and got some good experience selling Russian commodities in the South-East Asian market. I created  market for industrial  raw material exports and their packaging as per international standard, as you must be aware that in Soviet era products are packed as per local Market requirement.  For example, a plant was exporting Gum Rosin from Russia in wooden boxes. We teamed up with an American and a Dutch company to make special drums for them, for fertilizers and chemicals introduce P.P bags and jumbo bags It helped us to expand to the Asian market and reduce transit losses. In 2000 my subsidiary was selling consumer electronics, We were distributor for Panasonic in Russia and we created our own brand in the consumer electronic sector and our products were  sold to major   chain stores.

How did you end up in Russia?

My father is a technocrat and most of the projects he worked on were Soviet-supported. Like any father, he wanted his son to follow his footsteps. I came here in 1990 and graduated from Moscow Power Engineering Institute. After graduating, I went back to India, but only stayed there for a few months. I had become so accustomed to the Russian atmosphere and culture that as soon as I was asked to head a multinational company’s office in Russia I agreed. It was a major company that owned a chemical production facility in Russia.

What was it about the Russian atmosphere that attracted you?

The people even without knowing the language gave me a very warm reception. I can tell you of one episode: once on New Year’s Eve (at the height of winter) I could not catch a cab. And it was very cold. A Russian family gave me shelter, they treated me like their kin, fed me and let me get warm and then drove me to the university. The grandmother even said that since her grandson was in the army she would have me stand in for him.

Are you married? What food do you prefer?

Yes, I have an Indian wife. She recently gave birth to our daughter. At home we eat Indian and continental foods. But when we visit our friends we enjoy   Russian foods -  Pilmane, borsch, stalechni salads and different type of garnish. My wife knows how to cook borsch too.

A huge tourist cluster is going to be set up in the Yaroslavl region where Pereyaslavl is. How does that match up with the development of chemical production, which traditionally is not environmentally-friendly?

Our resident company does not produce raw materials, but end products from semi-processed goods that are supplied from Asia or Europe. Therefore, no harm will be done to the environment.

Do you think the Yaroslavl tourist cluster has a chance of attracting tourists from India?

The Yaroslavl region is much cheaper than Moscow and is just 3–4 hours’ drive by car from the capital. The two cities are going to be linked by high-speed train and there is a non-stop flight between Yaroslavl and Moscow. I think it will be an attractive destination for tourists in the medium-income bracket. Yaroslavl  is a historical place   is under golden ring having lots of Museums and Cathedrals in summer its very beautiful place .

Have the people in Russia changed over the past 20 years?

People and time change in any metropolis. They have little time for socialising. But I can be proud because I have a large family in Russia; I have many friends who treat me like a brother. There is one man who is like my grandfather.

You said that you like the Russian atmosphere. What do you think about Russian culture? Are you a theatre-goer?

I go to the theatre two or three times a year. I am very fond of Alla Pugacheva’s songs and I like the satirist, Mikhail Zadornov. The more you understand the Russian language, the more interesting he becomes. And, of course, I love nature and Russian architecture. My favourite city is St. Petersburg; I have visited it more than 50 times.