Not to worry, India ties will survive MiG setback 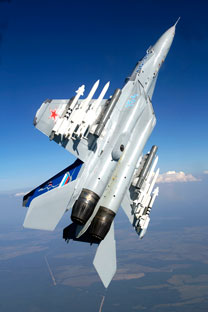 It is no tragedy that Russia lost the biggest aviation tender of recent years. Our military and technical ties with Delhi will survive it.

The Indian Defence Ministry’s announcement that the Russian Mig-35 failed to make the short list for the Indian tender to purchase 126 warplanes under the MMRCA (Medium Multi-Role Combat Aircraft) programme was bad news for the Russian Aircraft Building Corporation MIG. But it was not exactly a “bolt from the blue”. The result was expected. Why?

There were six fighter planes competing for the $11 billion tender, which would load aviation industries for years to come. These were the American F/A18E/F Super Hornet by Boeing and F-16IN Super Viper by Lockheed Martin, the French Rafale from Dassault Aviation, the Eurofighter EF-2000 Typhoon (from EADS), the Swedish Gripen NG (Saab) and the Russian  Mig-35.

At the 7th Aero India-2009 international air show in Bangalore, the sponsors described the Mig-35 as “absolutely the best”, as this writer heard from loudspeakers at the Yelokhanka air base. Huge roadside pictures of the Mig bearing the words “MiG – with India, for India!” were erected every 10-15 km on the way to the airfield.

But two years on, at Aero India 2011, the Russian fighter was not even on display. All the competitors were present and made demonstration flights, but not the Mig-35. The Indian ambassador to Moscow was reportedly trying to persuade the Russian firm to send its plane to Bangalore, but they decided not to. Apparently, they already knew that the plane had no chance of winning the MMRCA tender.

What is the explanation for this?  A few years ago, the Indians made a revolutionary decision to diversify their arms purchases.  They have a point. It is not a good idea to put all one’s eggs in one basket. Who knows what might happen and one cannot depend on a single arms supplier and its potential and ability to provide spares and to modernise equipment supplied earlier.

The equipment used by the Indian army and navy is 80% Russian/Soviet. The problems of the Russian defence industry, which is going through hard times, have an immediate impact on supplies to the Indian armed forces. The Vikramaditya (formerly the Admiral Gorshkov) aircraft carrier is a striking example.  India commissioned its modernisation at the Sevmash shipyard, but the ensuing seven-year delay virtually doubled the price.

There are other, subjective factors. Yes, the Mig-35 looks very much like the Mig-29K, which the Indian Defence Ministry bought from Russia for the Vikramaditya carrier. Yet, in reality, it is a totally new plane that can ensure air superiority and precision strikes on land and surface targets without entering the enemy air defence zone.  The Mig-35 is equipped to change direction quickly, which gives it a major advantage in a dog fight situation.  The cockpit is fitted with LC displays and front window indicators and is suited to night-time operations.

The Mig-35 is equipped to change direction quickly, which gives it a major advantage in a dog fight situation. The plane can carry weapons on nine external suspension points and even act as a refuelling plane. But the designers of the Mig-35 are especially proud of its avionics, which have no peers among European fighters, claims Nikolai Buntin, chief designer of the Mikoyan firm. First, it enables the fighter to operate by day and by night in any weather. Second, its survival chances in air combat are dramatically increased owing to advanced radioelectronic and optical electronic warning and response systems.

Basically, this is what the Eurofighter Typhoon and the Dassault Rafale, which made it to the short list at the tender, can do. Yet the Mig-35 has, in addition, a radar station with an active phased antenna grid developed by the Fazotron-NIIR corporation on the basis of the serially produced Zhuk-ME radar installed on the previous Mig-29K/KUB and Mig-29SMT models. The station tracks 30 air targets and provides for a simultaneous attack on six air and land targets at distances of up to 130 kilometres. The radar can also make maps. Problems arose, however, with that radar.

Fazotron-NIIR is going through hard times. The Indian delegation that studied the situation at the Russian enterprise working on the Mig-35 programme apparently had doubts as to whether the firm could fulfil the future contract on schedule. The approach was applied to the entire Mig-35 plane, which has a robust defence complex that warns the pilot of an attack, allowing him time to dodge an enemy missile or use his own weapons pre-emptively. The French Rafale and the European Typhoon have not yet have produced such a complex commercially, so they will take some time to launch serial production. Given the problems that bedevil the Russian defence industry, the time may be extended and the Indians chose not to expose themselves to yet another problem with the Russian aviation industry.

Indeed, several months ago, the Indian customers set some demands on their partners. Specialists have counted 14 of them, including replacement of some on-board equipment with foreign analogues, increase in the power and lifespan of the plane’s engines, and simplification of servicing and repairs. These requirements were not met on time. One can guess why. Perhaps some Russian aviation industry officials have decided that winning the tender was a foregone conclusion. Given other equal conditions and combat qualities, they thought the Mig-35 would beat its rivals on the “price/efficiency” ratio. Alas, this was not to be.

It is, of course, somewhat consoling that the American F/A18E/F Super Hornet and F-16IN Super Viper did not make it either, even though the Americans devoted a lot of time and money to enable their fighter planes to break into the Indian market. But sensible people look for the reasons for their defeats in themselves.

It is no tragedy that Russia lost the biggest aviation tender of recent years. Our military and technical ties with Delhi will survive it. We will continue working on the BraMos missile, on the fifth-generation fighter, the MTA transport plane, the Airborne Warning and Control System (AWACS), frigates and submarines, including the nuclear-powered Nerpa. We have a good many joint projects. It is important for both sides to draw lessons not only from successes but also from setbacks. As for the Mig-35: it will fly, if not in Indian skies, then in Russian and perhaps in some others.