Russia-India: waiting for a “reset” 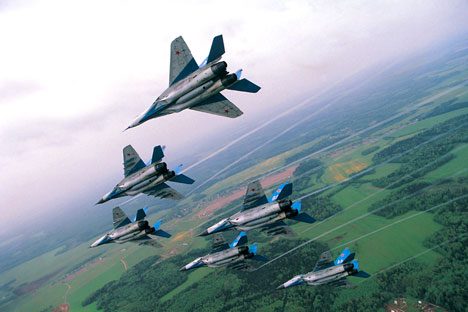 Let us face it, India’s having sent Russia packing from a tender for 126 multi-purpose fighter planes caught no one by surprise. Even so, the decision was tough to swallow for the Russian industry, politicians and all those who have been studying this interesting country for years. Clearly, India had been mulling over the issue for months and the final verdict was passed based on objective circumstances, including the MiG-35’s performance and Delhi’s determination not to be dependent on any single country for its military equipment. Be that as it may, India’s decision to exclude MiG-35 from the “game-changing” tender is sure to raise more general questions in Russia, to which a conceptual answer will need to be given as soon as possible.

First, did Russia lose the tender because of design flaws in the MiG-35 or because of systemic flaws in the Russian military-industrial complex, thus reflecting the country’s general economic development resulting from economic reforms chosen 20 years ago? Second, does it having taken so long to make the tender decision reflect the growing doubts in the Indian military-political establishment that the Russian military-industrial complex can provide India with all the weapons it needs to ensure the country’s security in the medium and long term, say, until 2050? Last but not least, is Russia pursuing a valid policy with respect to its military-industrial complex at a time when the effectiveness of the country’s foreign policy hinges on its scientific and technical potential and the economy’s capacity to promptly absorb the latest intellectual achievements of the “academia”?

Military-technical cooperation has always been an inseparable part of Russian-Indian relations in determining their national, regional and global dimensions. The lay of the land internationally makes close coordination of the foreign policies of our countries vital. India, like Russia, has always come out unreservedly for the unity and territorial integrity of any state regardless of its size, geographical position or natural resource potential. The Libyan crisis highlighted the need for an unequivocal position that recognises the priority of international law and non-interference in the internal affairs of independent states. China has moved into the leading position in this area, whereas the voices of India and Russia have been somewhat muffled. The latter circumstance has not only moral and ethical, but also very practical, relevance. The restructuring of the “post-American” polycentric world is under way and India and Russia must take a stance in it that matches their significance in international affairs and organisations. The future role of our countries in global politics will depend on the authority India and Russia command among the developing countries which are the home of the greater part of humanity, something that should always be kept in mind.

Life shows that large-scale global problems are solved by concrete people, politicians and diplomats. The human and personal dimension of world history takes on added importance now that the problems, processes and contradictions in world politics have become so much more complex. What Russian-Indian relations need more now than ever is a meaningful “reset” rather than endless foreign policy stunts that create the illusion that the countries are vigorously working together. I remember how much the Indian Ambassador to Moscow, Ronen Sen, did to restore the countries’ bilateral relations in the early 1990s after the collapse of the Soviet Union. Now a new moment of truth seems to have come, with Ajay Malhotra heading to Moscow to take up the post of Indian ambassador. Ambassador Malhotra knows Russia very well, having written his dissertation on Indian-Russian relations with Glery Shirokov, one of the most authoritative India scholars in Russia, as his advisor. The new ambassador has his job cut out for him and we all look forward to a new Russian-Indian “reset.”