Ten years in prison for divorce? 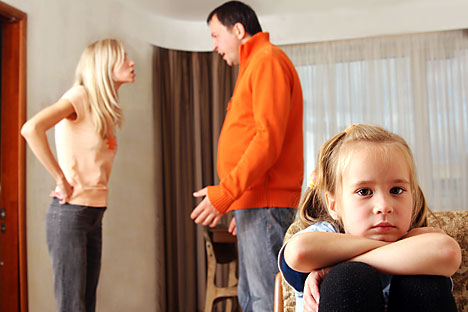 Public protest help scuttle an absurd law on parental rights - is there a future for Russia's civil society?

In late March, the Russian public, especially parents of underage children, were literally in shock. State Duma deputies had prepared a new draft law that, if passed, would dramatically alter the rights of divorced parents. According to the draft law, divorced parents who prevented their spouse from seeing their children by taking them abroad or to another city would be subject to harsh punishment—10 years in prison. No more and no less.

Your initial response might be: “That’s absurd!” But it’s not that simple. The Russian legislators naturally claimed that the appearance of this strange new law was prompted solely by regard for the children’s best interests, and indeed there is some rationality in their arguments. Today, 50 percent of all Russian marriages end in divorce and in many cases, parents use the children as pawns in their negotiations. For examples: “If you don’t give me the apartment, I won’t let you see our child,” or: “If you want the dacha, the children stay with me.” When the marriages of wealthy New Russians began falling apart, the situation became still more critical. The problem is that in 95 percent of all cases, the Russian courts award custody of the children to the mother. Needless to say, wealthy fathers are not always in agreement with such a decision. Often they simply take their children away illegally. And then their armed bodyguards don’t let the mothers within firing distance of their fortress-like houses.

Clearly, parents who steal their children from each other and use them as bargaining chips need to be punished in some way. But why with such severity and all of a sudden? Under Russian law, 10-year sentences are meted out to rapists and drug traffickers. And now perfectly normal citizens, whose entire guilt consists of their inability to share custody of their children, are potentially subject to the same. As though locking up a father or mother for 10 years was also “in the best interest of the child.”

No wonder this ham-fisted initiative sparked immediate protest. “If I take my son abroad on vacation without asking my ex-husband’s permission simply because I can’t find him, does that mean I can be put in prison for ‘the illegal transfer of a child?’” an indignant mother wrote recently in her blog. “In that case, why have children at all if in future you can be blackmailed with the threat of prison?” agreed another. Moreover, the vagueness of the formulation “preventing contacts with a child” means that it can be applied to all sorts of situations. A former husband turns up in the middle of the night, and not particularly sober, to see his son, so his ex-wife doesn’t let him in: that is already grounds for putting her in prison.

A website created to protest the law, called “No to mothers on trial,” collected 15,000 signatures in a matter of days on an appeal to ask the speaker of the State Duma not to pass such an ill-considered draft law. Outside the entrance to the Duma, a demonstration took place: Several pairs of “newlyweds” dressed up in wedding clothes and shackles distributed leaflets with the demand that this “family Gulag” not be allowed. Many famous lawyers spoke out against the initiative in no uncertain terms. Most of the mass media supported public opinion and severely criticized the deputies’ legislative ardor.

The draft law’s initiators admitted that this outpouring of strong public resistance came as a complete surprise, and in the end, none of them had the will to fight their way through it. As a result, this new draft law did not make it even to the second reading, scheduled for late April. Instead of prison terms, parents who keep their children from each other will have to pay a fine on the first offense; a second offense is punishable by five days in jail.

The main lesson in all this is that Russian citizens are perfectly capable of standing up for their rights—although it’s true that they are interested only when their vital interests are at stake. If my ex-husband can have me thrown in prison for no reason at all, excuse me, I can’t allow that — I’ll personally go to the barricades!

Here’s an example from a slightly different sphere, but still relevant to the subject. All last year there were public protests in Moscow against the construction of a highway to St. Petersburg that would run through a suburban Moscow forest. In this case, both the prime minister and the president stepped in to sort things out. It cannot be said that the defenders of the forest were entirely successful. The new toll road will run through the forest as planned. But the appetites of the builders were significantly curbed in that they received permission only to construct the actual road. The roadside construction originally planned was ruled out. The main result, however, is something else. As a Moscow bureaucrat put it, the story of the suburban Moscow forest taught them a lot. Now, before beginning construction of another highway, they will have to consider public opinion, since no one wants another huge scandal.

It looks as though a civil society in Russia is beginning to grow up. That means that bureaucrats who launch senseless projects and deputies who draft absurd laws will have to take that society into consideration.