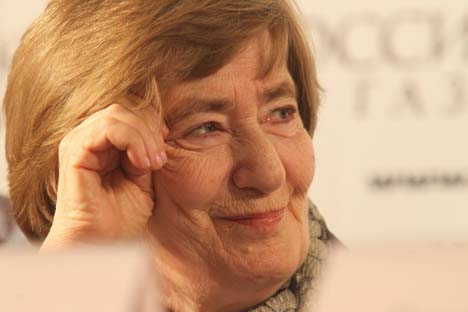 The 2011 Alexander Solzhenitsyn Literary Prize was awarded Yelena Chukovskaya, granddaughter of beloved Russian writer Korney Ivanovich Chukovsky and daughter of renowned dissident Lydia Korneevna Chukovskaya. For many years, Yelena Chukovskaya served as Solzhenitsyn’s transcriptionist and was instrumental in the preservation and distribution of his works. “The Gulag Archipelago” was preserved largely thanks to her involvement. Tatiana Shabaeva, a translator and frequent contributor to Russia Beyond the Headlines, talked with Yelena Chukovskaya about Solzhenitsyn, the Chukovsky family legacy, literary translation and 20th century Soviet history.

Editor's note: In order to remain true to the speaker's words as well as to Russian custom, in which all adults are addressed by their name and patronymic rather than by first and last name, throughout the text, Korney Chukovsky appears at Korney Ivanovich and Lydia Chukovskaya as Lydia Korneevna.

RBTH: What does winning the Solzhenitsyn prize mean for you?

Yelena Chukovskaya: It means a lot. For years, Alexander Solzhenitsyn was personally involved in choosing the winners; he had his own requirements and interesting reasons for giving the award to a particular person. In my case, the reasons are diverse, featuring my involvement both with Korney Ivanovich [Chukovsky] and Lydia Korneevna [Chukovskaya’s] legacies and Alexander Solzhenitsyn’s work.

RBTH: What was your involvement with [Solzhenitsyn’s] work?

Y.C.: While he lived outside Moscow, all his work was done there. This included typing up his manuscripts; I personally typed up “Cancer Ward,” two volumes of “The Gulag Archipelago” and part of “The Red Wheel.” They had to be stored and distributed, both of which were a challenge at the time. Manuscripts were never stored either by Solzhenitsyn or at our place; they were passed on to and stored by people who were not associated with us and who received them through a chain of other people. Solzhenitsyn used to recollect: “Storing [my works] was no less challenging than actually writing them.” One had to remember all the storage places; passing the manuscripts on was as difficult as getting them back. A complex labelling system was in operation. Manuscripts would be picked up by people from various towns and cities and someone needed to meet with all of them. Among other things, I typed up “Letter to the 4th Writers’ Convention;” there were over 200 copies to be circulated. Solzhenitsyn received a lot of mail, which also had to be answered in his absence. Someone had to keep track of articles in the press. When writing ‘The Red Wheel,” he cut off all communication with many prominent historians, so someone had to meet with them, pass on questions and obtain answers.

RBTH: Solzhenitsyn is referred to as a “classic.” What sets a classic apart from others?

Y.C.: The scale of his work, the quality of his writing and his influence on others. One might say that Solzhenitsyn shook up our country and turned it in a specific direction. He showed what one committed person can achieve.

RBTH: What do you remember about Andrei Dmitrievich Sakharov?

Y.C.: He was a quiet man, and very luminous. We didn’t know each other very well. During the struggle to get “The Gulag Archipelago” published, a letter was written to the Central Party Committee that needed to be signed by Sakharov. Knowing of his disagreements with Solzhenitsyn, those who composed the letter wrote: “The Archipelago has to be published despite our disagreements.” And this was the letter I brought to Sakharov. He read it and said: “Why mention the disagreements? There is no need for that.” So he struck the phrase out. He was a remarkably noble man.

RBTH: How did Lydia Korneevna's books reach the West?

Y.C.: In 1962, when the thaw began, Lydia Korneevna handed her [book] “Sofia Petrovna” over to the Soviet Writer publishing house. But there was not enough time for the book to come out before the thaw ended. However, when a manuscript is handed over to a publisher and when several copies of it are in existence, it becomes extremely difficult to control its distribution. Back then, it meant that the book could surface anywhere. That was how “Sofia Petrovna” ended up in the West and was published in Paris without Lydia Korneevna’s knowledge or consent. She learned about it from the artist Annenkov’s letter to Korney Ivanovich. At the time, she was put out by the fact that the publishers had re-named both the book and the main character while also adding their own epigraph. This was how the book was published and the different title [“Olga Petrovna”] is reflected in almost every translation. Moreover, the right to publish the book abroad is still retained by an English publisher.

RBTH: How did the Soviet security agencies react to Lydia Korneevna’s book being published abroad?

Y.C.: By the mid-1960s, Lydia Korneevna had made a name for herself in the literary world, and Soviet publishing houses had published several of her books. Korney Ivanovich's gravitas protected Lydia Korneevna up until his death in 1969. But she spoke out during the Sinyavsky and Daniel trial by presenting an open letter to Sholokhov. This was aired by all “hostile” Western radio stations. Previously, Lydia Korneevna
had been contributing to the efforts to free Joseph Brodsky for several years. In 1968, there was another open letter, this time in Solzhenitsyn’s defense. Any reference to her [Lydia] was banned almost immediately, only a few weeks after Korney Ivanovich’s death. In 1974, Lydia Korneevna was expelled from the Writers’ Guild for her article “People’s Wrath” (in defense of Sakharov and Solzhenitsyn). She was also, as she would put it, “expelled from the family.” Whenever Korney Ivanovich’s diary was published, her name was deleted. When, in 1977, the collection “Remembering Korney Chukovsky” was being published, the editor told me: “We should ensure that no-one sneaks Lydia Korneevna
in.” This is when I introduced an unsigned childhood photo of her into the volume. I did sneak Lydia Korneevna in.

RBTH: Your grandfather, Korney Ivanovich Chukovsky, translated Wilde, Kipling, Defoe, O.Henry, and Whitman. What was most important for him in his work?

Y.C.: I think the most important thing for him was to ensure that the books did not sound like translations, that they sounded Russian. Any editing he did was aimed at improving the quality of the language. Besides, he simply loved Whitman and Wilde and carried his interest in Wilde’s biography and Robert Ross though his whole life. He was proud to be the only person in the country to have Wilde’s autograph, on a page from “The Ballad of Reading Gaol” that Ross himself had given to him. For Korney Ivanovich, Wilde was an exceedingly important literary phenomenon.

He dug very deeply into the authors he translated. And he never really approved of his own works being translated. Korney Ivanovich believed that his fairy tales were untranslatable.

RBTH: How did Korney Ivanovich become an honorary Doctor of Letters at Oxford University?

Y.C.: He was about to turn 80 when Oxford University made the unsolicited decision to award him an honorary doctorate, honoris causa.  That was his third visit to England. The first time was in 1903, when he was sent there as a young correspondent. In 1916, he made a visit as part of a very high-level journalist delegation that was received by the king. And the third time was when he came to receive his doctorate. His cap and gown, of which he was very proud, are stored in Peredelkino.