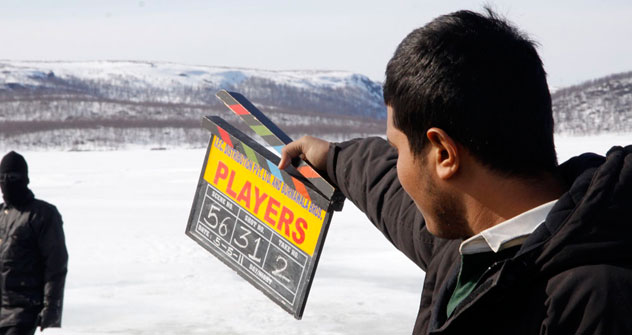 Abbas-Mustan are shooting an action thriller tentatively called Players on location north of the Arctic Circle in Russia. All photos by Aleksei Mikhailov

Indians are shooting a remake of 'The Italian Job' beyond the Arctic Circle.

Russian motorists driving beyond the Arctic Circle have never seen anything like that before. A column of trucks lines a back road close to the St Petersburg–Murmansk Motorway. Dark-skinned people dart about hurriedly, contrasting starkly with the snow-white landscape and the pale faces of locals who don’t get to see the sun for six months a year on end. A trailer with its back doors wide open is parked at the shoulder, with stacks of gold bullion clearly visible inside. It’s incredible, but it’s real: The famous Indian directors and producers, the brothers Abbas Alibhai Burmawalla and Mustansir Alibhai Burmawalla, aka Abbas-Mustan, are shooting an action thriller tentatively called Players on location north of the Arctic Circle, starring Abhishek Bachchan, the sex-symbol husband of Miss World 1994 Aishwarya Rai.

The Indian film studio IFC Distribution Pvt Ltd. has started shooting the movie as part of a Russian–Indian state-sponsored cultural exchange programme approved by both governments after Russian President Dmitry Medvedev visited Bollywood. The duo have acquired the rights for a remake of The Italian Job, a famous action flick, from Paramount Pictures. The gold in the truck is not real of course – the gold bricks were custom made in India. In the film, it will play the role of six tons of gold stolen by the thieves.

“When we first started planning the movie, we were very much intrigued by the scene where trains race across the snow-covered plain,” said Mustansir Alibhai Burmawalla. “So we started looking for a suitable location. A compatriot working in Russia told us about Murmansk. We visited last year, looked around, and liked it a lot. So we started scheduling.”

The film consists of two parts. The second part has already been shot in New Zealand, while part one is being filmed in the Murmansk region. The crew has chosen two locations: the Bolshoi Lapot Lake and a railway station at the small town of Piajve. The crew will then move to St Petersburg. The film will feature the city’s most beautiful landmarks, such as the Winter Palace and St Isaac’s Cathedral.

Abhishek Bachchan plays the ringleader and the mastermind of all his gang’s robberies. Bolshoi Lapot Lake is the location for one of the key scenes: the bandits celebrate a successful heist only to discover a traitor within their ranks. He is of course also a romantic hero in a beautiful love story.

“I’m lucky to date two girls at once according to the script,” said the actor. When asked whom he will eventually choose, Abhishek laughed and quipped: “Why choose? I’ll keep both.” By the way, one of those women is the Bollywood diva Bipasha Basu, who plays the role of a gifted thief working in tandem with the ringleader.

“We hit a lot of different targets together: an art gallery, trains, and banks, including Russian ones,” Bipasha said. “We have stand-ins and stuntmen, but I like to do stunts myself because I’m into sports. If the director lets me do a stunt, I’m happy to oblige.”

The actors performed almost all complicated tricks under the guidance of an experienced stuntman. Stunt director Allan Amin said that some of the tricks filmed in the Arctic had never been attempted in Bollywood before: “We shot a scene from a helicopter where the main character drops in and hangs between two trains moving at 60 km/h while trying to break into a safe.”

Two well-known Russian actors, Vyacheslav Razbegayev and Stanislav Oskolkov, appear in supporting roles. The latter visited New Zealand, while the former will have to travel to Mumbai where he will take part in a singing and dancing episode. The Russian actors also play extras where they portray armed thugs wearing face masks and shades.

Players will be released in Russia in November or December of 2011 with subtitles. The St Petersburg film studio Globus Film organised the Russian portion of the filming. The Indian remake of The Italian Job will obviously significantly differ from the original, with less shootings and blood and with more music and dancing.

The Extreme North has made a lasting impression on the film crew. Despite the glaring sun, the director was wrapped up to his eyes in a dark-blue feather-down coat and was wearing warm gloves throughout. Actor Bobby Deol admitted that he had never felt so cold before.

“It’s as if winter suddenly strikes in the middle of summer,” he said with amazement. “I never felt so cold before in India even on the coldest days. Over here, I keep adding layer after layer but still can’t get warm. We work between 10 and 12 hours a day, because the sun never goes down here! I grew accustomed to the fact that beyond the Arctic Circle, it’s daytime until almost midnight. Unfortunately, because of my tight filming schedule I didn’t have the chance to explore Murmansk.”

“When it snows, it’s like a fairytale,” Bipasha Basu said about her impressions of the Extreme North. But what about the traditional Bollywood singing and dancing in the freezing cold? “It’s hard to imagine Indian cinema without dancing, because it’s part of our culture,” confirmed the actress. “Of course we will have dancing, but we will shoot them elsewhere.”