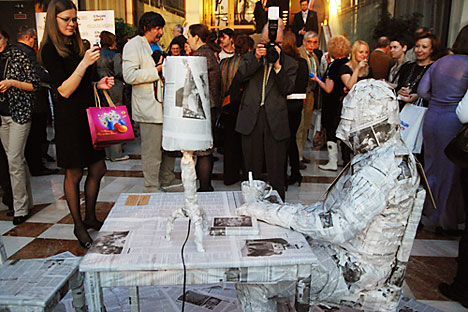 The Russian Prize, founded by the Boris Yeltsin Presidential Fund for Russian writers and poets living outside of Russia, was awarded in Moscow in late April. As Andrei Drozdov, the executive director of the Boris Yeltsin Foundation, said, “The Russian Prize is an echo of the tectonic shift that shook the country in the early 1990s.” The metaphor seems all the more relevant once you know that applications for the Russian Prize came from 640 writers in 42 countries.

In the end there were 11 winners, three in each of the nominations: Poetry, Short Prose, and Long Prose; two prizes were awarded for Contribution to the Development and Safeguarding of the Russian Cultural Tradition outside Russia.

Participants took the floor to speak about “an original view from the outside,” from emigration, a view that is at the same time more critical and more affectionate. They also spoke about the special space that is held together by the Russian language. According to Marina Paley, who lives in the Netherlands and won the Long Prose prize for her novel The Choir, émigré writers are particularly keen to preserve the purity of the language, to protect it from extraneous influences and are in that sense more selective than the writers who live in Russia and who show less reverence for the treasure they possess.

And yet Russian émigré literature is experiencing some hard times. A case in point is the plight of the journal Zarubezhnye Zapiski (Foreign Notes) whose editors, Larisa Shсhigol and Daniil Chkonia, both living in Germany, won the prize for Contribution to the Development and Safeguarding of the Russian Cultural Tradition outside Russia. The journal was published for five years, four issues a year, with a circulation of 2,000 copies. Alas, Zarubezhnye Zapiski was not spared the woes that befell all the serious literary journals with the onset of the financial crisis. Larisa Shсhigol, a wonderful poet and translator, did all the literary work on sheer enthusiasm. “I do everything at home on the back of an envelope,” she said. “We need 15,000 euros a year to publish the journal, and that only covers the cost of printing and distribution. We pay our authors symbolic royalties, and some prominent authors contribute their works for free just to keep the journal afloat. Make no mistake: This is Munich, and not Russian-speaking Odessa and we have fewer sources of financing to draw on.”

However, according to one Odessa poet, Boris Khersonsky, the sources of financing are only one of the problems. When asked where most of his readers live, the poet listed Moscow, St. Petersburg, New York and Jerusalem, and only then Kiev and Odessa. “If a performance by a good poet, like Nastya Afanasyeva, in Russian-speaking Odessa is put on, you may expect about 15 people to attend. That is too little,” Khersonsky said.

A cheerful contrast to this gloomy background is provided by the publishing project called The Russian Gulliver. Its founder, poet and writer Vadim Mesyats, has lived in the United States for many years where he translated the poetry of Dylan Thomas and Edward Foster, and compiled An Anthology of Modern American Poetry. His selected writers for the anthology based on their links to American traditions and their native soil.

“I wrote two novels in the United States,” he said. “One was about Americans, and it did not seem to attract much interest. But the one about Russians was a success.” Mesyats appreciates the literary and human experience he gained in the United States. “However, when I returned to Russia, I got a new sense of freedom,” he said. “I can afford to stage campaigns and issue manifestos that would not be understood over there. It is good that there is a prize for Russian writers abroad: I am sure that their life is hard, I know first hand the sense of alienation when you sit on Long Island and everything is happening without you.”

Authors from The Russian Gulliver, “a periodical where poets print poets,” often do well in the Russian Prize contest. This year it nominated Natalya Gorbanevskaya, who won the Poetry prize. An outstanding poet, a prominent human rights activist and one of the best-known Soviet dissidents, she now lives in Poland.