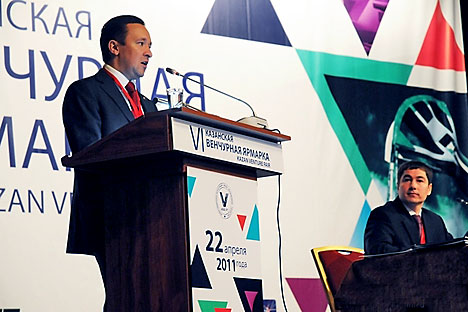 From the point of view of a venture capitalist, Russia's regions have more to offer than the capital.

Dear readers! I am back! After a brief spell with the family and an exceptionally busy period in London, I have returned to Chistopol, greeted by snow on the ground and a wintry chill on the face! A far cry from the summer weather I was enjoying in London just before I left. Thankfully all that’s gone now, we’re in May and all the snow has disappeared. It constantly amazes me how fast this transformation happens. One day you can’t live without your winter coat, the next day you can’t imagine you ever wore it!

It is indeed good to be back, and I have spent my first month laying the foundations for our latest project, PPP Local (http://www.ppplocal.com), and having regular meetings with the Chistopol local government. My next blog post will be the start of an ongoing short series of posts about the implementation of PPP Local in the regional area and my ongoing discussions with local and regional representatives, including Chistopol’s participation in the federal Mono Town program (http://www.monogorod.org), an initiative with an aim of increasing the market offerings of single industry towns.

However, for this week, I want to revisit and expand on an earlier article published on RBTH discussing an Ernst and Young report (with the New Economic School) that concluded that the Republic of Tatarstan was indeed a better place to do business than Moscow (https://www.rbth.com/articles/2011/03/18/moscow_is_no_place_to_do_business_12575.html). I will also include some of my insights from the recent Kazan Venture Fair, which I had the pleasure of attending and that I believe will reveal some complementary analysis on the potential of the region.

The article was actually republished from Gazeta.ru and I when read it I was very pleased. I felt a feeling of justification. Actually, Anton Struchenevsky, the analyst at Troika Dialog, who was quoted in the article, said it best: “it's nice to have ‘proof of something that we could sense.’” I have been to Moscow several times, but I have never done business there. For me, Moscow is very reminiscent of London, and both cities hold little interest to me from my perspective of an emerging market investor. However, if we go beyond my own personal interests and requirements, the report details many aspects of Moscow that are simply unattractive for business owners. In fully formed centers like Moscow, you tend to get a lot of bloat. This translates into as higher prices, taxes, and a general feeling of not getting value. I managed to track down the full report and it’s actual on our website - http://www.blueskylabsfund.com – in the News section. Unfortunately, it’s only in Russian at this time. By contrast, in emerging centers like the Republic of Tatarstan, everything is much leaner. This is mainly because the local area can’t afford to be anything else. If the prices are too high, or the business process wildly complicated, people will simply settle elsewhere to do business. This translates to more value to business owners, and hence the increased attractiveness.

I have been based in Chistopol (an hour outside of Kazan), for the past two-and-a-half years, and since I have arrived, I have only seen positive change. Having surveys like the Ernst and Young report (in 2009, the World Bank did a survey with similar results) are very encouraging, as it validates these feelings and these experiences. That said, there are still a lot of issues that crop up when conducting business in Tatarstan. If I were filling out the survey, I think the focus of my complaints would be on staff and partners. The mindset is still immature in the regional areas. That is not to say there isn’t a growing group of internationally minded, home-grown entrepreneurs, but there is still a large amount of Soviet-era thinking and mentality as well. This, combined with the fact that the consumer power is stronger in places like Moscow, may give people pause to consider the Republic of Tatarstan as an area to do business. However I feel that over time the mindset will change, and at the moment, places like Kazan have a growing appetite for goods and services.

I guess the final point to make on this is that the Tatarstan government is exceptionally progressive. From an outside view, it is actually quite impressive. There is a genuine desire by the regional government to improve the business climate in the region and create foreign partnerships. One of the most recent examples for me on this was the Kazan Venture Fair, hosted by the Tatarstan Venture Fund, a fund set up by the Republic of Tatarstan, whose chairman is the prime minister of Tatarstan. I believe the fund was one of the first of its kind in Russia. I saw the event advertised few months ago and kept in touch with the organizers. Even at that time my liaison, Ildar Abdrashitov (a project manager for the Tatarstan Venture Fund) was extremely gracious and attended to all my questions and requirements. There was a real sense of hospitality and it was clear that everyone there was trained very well to deal with foreign investors and visitors.

The event was hosted in the Korston Hotel, and all the rooms were renamed after famous Russian authors. Each room was equipped with translation headsets and there were two interpreters in each room translating the Russian speeches into English, which meant my interpreter had very little to do. I found this very impressive, as it must have come at a considerable cost and in some cases I was the only one who was using the headset.

The first session was the Plenary Session. The president of Tatarstan was on stage alongside the prime minister, the CEO of the Tatarstan Venture Fund, and some representatives from Moscow's Skolkovo. The hall was impressive, and there are some videos on our Blue Sky Labs website about the event. There were several English speakers, most notably, the founder of Yozma, the Israeli equivalent of the Tatarstan venture fund, which was founded in the late 1970's. Steve Burrill, founder of Burrill & Company, a life sciences investment firm, was also there along with Uli Frike, who is the vice chair of EVCA, a European venture fund.

The most interesting discussion of the day was the first roundtable (again videos on our website) called “Dialogue between Western and Russian investors.” The prime minister was moderating, with the CEO of the Tatarstan fund, Steve Burrill, the founder of Yozma, Uli Frike, a few others present. Some key things came out - people mutually agreed that it takes round 10 years and $10 million to become a venture capitalist,; the head of the Microsoft seed fund in Russia emphasized the importance of the SME climate and its role in creating a venture climate; and Steve Burrill emphasized that business education was a crucial factor to success. The discussion ended with a debate on the various limits of government intervention in the business sector, with the head of the Yozma group saying it should be very limited, and Steve Burrill saying it should be much more, even suggesting that the republic mandate that all companies of a certain size spin out a certain number of smaller companies each year.

In short I gained a lot value from the event, much more than I received at the London Business Week for example (although the scale and funding of the fair far exceeded that of the LSE Russian Society and so the comparison is perhaps a little unfair), but most of all, it was seeing the passion for growth, change and success echoed by the regional government that pleased me the most. For me, it was just further proof that when it comes to doing business Russia, Tatarstan has a lot to offer.