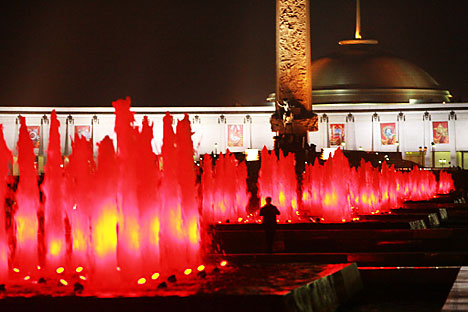 Reminders of Moscow’s military history make an interesting program for tourists throughout the year, not just on May 9.

Every May 9, a victory parade to celebrate the end of World War II marches and rolls across Red Square and through the main streets of Moscow. Last year’s parade, marking the 65th anniversary of Victory Day was the biggest since the Soviet era and controversially included British, American and other foreign troops, as well as a huge amount of military hardware. But you don’t have to visit the city in May to see tanks and uniforms. Moscow is crowded with monuments to soldiers of all ranks and museums that commemorate their deeds.

Reminders of the Second World War (or Great Patriotic War as it is known in Russia) are spread across the city—from the Tomb of the Unknown Soldier below the Kremlin walls to the huge memorial complex at Park Pobedy.  An equestrian statue of Marshal Georgy Zhukov, leader of the Soviet troops, spurs his horse towards the Okhotny Ryad shopping center from his prominent location just outside Red Square. There is another memorial to the marshal on the highway named after him in the west of the city.

The extraordinary scale and range of the buildings and museums that spread across “Victory Park” is commensurate with the unparalleled scale of Soviet losses during World War II. Symbolism is rife: The soaring 142-meter obelisk in front of the museum has 10 centimeters to represent each day of war. The prancing bronze St. George nearby has sliced up a swastika-covered dragon.

Inside, the Hall of Sorrow is hung with 26,000 crystal teardrops to symbolise the 26 million Soviets who died in the war. The Hall of Fame at the top of the oak-leaf-bedecked staircase is decorated with plaster reliefs of the "hero cities" and is used for military graduations. The museum has extensive exhibits from each stage of the war and six artistic dioramas of key battles. The park contains open-air collections of military vehicles, submarines and tanks, as well as a memorial church, synagogue and mosque.

The super-shiny Park Pobedy metro station, designed like much of the complex by monumental sculptor and artist Zurab Tsereteli, boasts Europe’s longest escalators, but this is not the only of Moscow’s fabulous metro stations to have a military theme. The most spectacular is Komsomolskaya station on the ring line, whose gold-backed mosaics provide a crash course in the history of Russian warfare from the medieval Battle of the Neva to the victory in 1945. Several other stations on the ring (brown) line were built soon after the end of the war and reflect recent triumphs and tragedies in their décor.

Central Museum of the Armed Forces

This huge purpose-built museum, near the new Dostoyevskaya metro station, surveys a dramatic century of history. Among 800,000 exhibits, there are dioramas of the civil war, the wreckage of an American U-2 spy plane and the actual Nazi banner captured by the Red Army from outside the burning Reichstag. There is a model of the first-ever Victory Day parade on Red Square and a display of army uniforms, showing the changing fashions in military style over the years.

A T-34 tank and missile flank the entrance to the museum and the courtyard is full of missile launchers, tanks and helicopters. To the delight of visiting children, these machines can be climbed on. The star-shaped, flag-topped Red Army Theater towers over the area, while the Yekaterininsky Park next door is dedicated to war veterans.

Far out in the old Olympic Village near Yugo-Zapadnaya, there is a museum dedicated specifically to the Battle of Moscow, which took place during the harsh winter of 1941. Compared to the gargantuan Park Pobedy, the museum feels almost intimate, but by any other standard it's still huge. The larger exhibits include parachutes, train carriages and dirigibles. There is even a German motorbike parked among the familiar propaganda posters ("The Motherland is calling you," "We will defend Moscow"). There are also more personal possessions, letters and photographs. In a trunk full of children's toys and books, a message in pencil reads "Mommy, take me home. It's bad here." A hand-painted Christmas postcard is inscribed "To Father at the Front: Daddy, beat the fascists."

The Great Patriotic War was not the only time an invading army has been driven back by the Russian winter. The Napoleonic Wars also left their mark on Moscow in heroic and bloody encounters that 60 years later inspired Leo Tolstoy's "War and Peace." The Muscovites burned and rebuilt their city in the early 19th century. Next year will be the 200th anniversary of the 1812 battle, in which Russian and French armies clashed near the village of Borodino. Every year on the first Sunday in September, hundreds of uniformed battle re-enactors get together on the fields where it took place. You can visit the scores of monuments and interesting museums in rolling countryside at any time of year. You can see the spot where Russian general Pyotr Bagration fell, and explore the trenches dug during World War II, when the area again saw heavy fighting. Borodino is 130 kilometers west of Moscow and makes an interesting day trip by train.

For those who would prefer to stay in town, the Borodino Panorama has vivid tableaux (with sounds effects!) recreating the 15-hour battle in which 100,000 soldiers died. Behind the round building that houses the panorama is the log cabin of Field Marshal Mikhail Kutuzov, who led the Russian troops. His cabin looks a little the worse for wear, but a gleaming statue of the field marshal stands proudly above the main road, Kutuzovsky Prospekt, which was named for him. There are several war memorials along this busy road, including Bagration on horseback shaking his sword at the traffic and a huge hero-city obelisk at the intersection near Kievskaya.

Outside Park Pobedy metro station is the Triumphal Arch designed by Osip Bove (architect of the Bolshoi Theatre) to celebrate victory in 1812. The choice of venue for these memorials and the whole complex of museums and monuments in Victory Park on Poklonnaya Gora (“the hill of bowing down”) is not random. Napoleon approached the city along this road and waited on this hill, looking down on Moscow, to be handed the keys of the city. As Tolstoy describes the view in War and Peace: "Moscow ... lay spaciously spread out ... her cupolas glittering like stars in the sunlight."

Central Museum of the Armed Forces