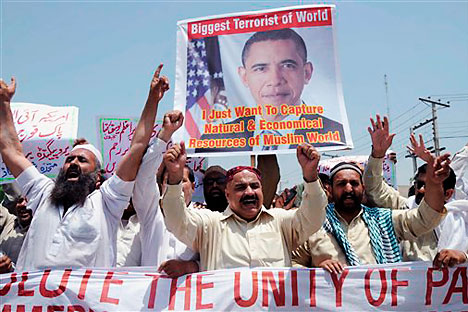 The “great game” in Central Asia, which has been dormant for a while, is showing signs of picking up.

The party is over. With the excitement in the United States over the killing of Osama bin Laden showing signs of slackening, serious political stocktaking has begun. The United States Congress has held hearings. The USA Today reported from Washington, “The death of the terror network's leader and an intensified debate about how to cut federal spending are fuelling calls to accelerate the promised troop withdrawal from Afghanistan, declare victory and get out.”

What does it all add up to in the final analysis – a watery grave for bin Laden? The prestigious poll by USA TODAY / Gallup over the weekend has come up with some startling results. A lot of findings here that will make Barack Obama sit up and take note. Amongst them:

•   Nearly 6 Americans out of 10 think that with bin Laden’s death, it’s time for US to declare victory and get out of Afghanistan.

•   Such sentiments may be on an upward curve, still building.

•   Obama risks alienating his Democratic base if he chooses to continue with the war.

•   The demographic groups who form the bedrock of grassroots support for Obama - blacks, Hispanics, liberals, women under 50, youth under 35, low-income groups, unmarried people - they happen to be the most vocal about bringing US troops home from Afghanistan.

•   There is no demographic group in American society today which entertains majority opinion that continued US deployment in Afghanistan is justified.

•   Even among Republicans, enthusiasm for the war has waned. The party is evenly decided - 47% for and against the war. Among Independents, 62% feel the mission has been accomplished in Afghanistan.

•   Cutting across party lines - from traditionally anti-war Democrats to freshman Tea Party conservatives - there is growing questioning about the cost of the war and the returns of a military mission in Afghanistan.

Clearly, the support for the Afghan war is dramatically thinning in America. Fewer than 1% of Americans think that Afghanistan is the most serious issue facing their country. The American public and politicians are obsessed with the bad state of their economy and the budgetary crisis.

However, public opinion is not necessarily – and has seldom been – the ultimate determinant in the US foreign policy. What distinguishes the present situation is that the American people are feeling greatly insecure about their life and the state of the economy and 2012 is a presidential election year. Ultimately, it is going to be President Barack Obama’s call. And, he is a gifted intellectual who is attuned to viewing politics as the art of the possible.

The USA TODAY reports: “The administration is already pressing hard for serious negotiations [with Afghan insurgents]”, a senior administration official says. “We do want to take full advantage of what could be an opportunity”, he said, speaking on background because the effort is being made behind the scenes. “We have aggressive messaging to the Taliban to see if there’s a way forward.”

What do the SMS messages coming from the cellphones of Washington officials convey to the Afghan insurgents? Hamid Karzai would already know by now that the US priority will be to end the war. In any case, Afghans by and large romanticize bin Laden and can never be party to demonizing him. Also, Al-Qaeda has always been a mythical creature.

In short, a fig-leaf can always be found that the Taliban (including the Haqqani network) are prepared to disengage from the al-Qaeda. Paradoxically, the killing of bin Laden provides a conducive setting to introduce the intellectual construct that the nexus between the hardline Taliban leadership and al-Qaeda has been severed.

But then, the Obama administration is also a divided house. Quite obviously, State Department prefers a political solution to the Afghan problem. Secretary of State Hillary Clinton made this clear in her major policy speech in the Asia Society as far back as February. She repeated last week that bin Laden’s killing provides the opportunity to explore the political process. The Vice-President Joseph Biden is also known to favour a quick end to the war.

On the contrary, the US military establishment – especially US commander General David Petraeus – has pressed for a robust pursuit of the war. The irony is that today bin Laden’s killing can be turned into an argument by both schools of thought to establish the merits of their case.

The congressional hearings have shown that the mood on the Hill is distinctly turning against the war. For a growing majority of US Congressmen, the high cost of the war is an unbearable burden for the country’s economy to sustain. This is evident from the pronouncements of important political personalities like John Kerry, chairman of the senate foreign relations committee, and Richard Lugar, leading Republican in the foreign relations committee.

The high probability is that the US administration will be looking for a way out of Afghanistan by reconciling the Taliban and bringing the war to an end. Kerry could have been echoing the dominant thinking when he said that bin Laden's death "provides a potentially game-changing opportunity to build momentum for a political solution in Afghanistan that could bring greater stability to the region and bring our troops home." The word “game changer”, curiously enough, also figured in the recent remarks by the Secretary of Defence Robert Gates at the Seymour Johnson Air Force Base in North Carolina on May 6.

Indeed, somewhat cryptically, though, Obama himself seemed to give weightage to such a thought process in his interview with the CBS’ 60 Minutes programme last Sunday where he said that Bin Laden's death "reconfirms that we can focus on al-Qaeda, focus on the threats to our homeland, train Afghans in a way that allows them to stabilize their country. But we don't need to have a perpetual footprint of the size that we have now." Obama seemed to prefer a much smaller US footprint that at present in Afghanistan with the US forces restricting themselves to Special Forces operations or targeted drone attacks rather than the extended counter-insurgency operations.

Given these incipient trends, Russia has done the smart thing to invite Pakistan President Asif Ali Zardari over to Moscow and to build rapidly on the momentum of ties between the two countries that has been evident in the recent years. The Pakistani Prime Minister Yusaf Gilani is scheduled to visit Beijing next week. The Iranian Foreign Minister Ali Salehi is due in Islamabad. The time has come for the regional powers to keenly look for what is there in it for them if the US troops go home in large numbers and how they could hope to influence the contours of an Afghan settlement.

Pakistan’s goodwill and cooperation becomes important for all regional powers and accommodating Pakistan’s interests in the settlement will appear to them to be a reasonable thing to do – and even a necessary pre-requisite – in order for peace to be durable.

The best way regional stability can be safeguarded will be by making Pakistan a real “stakeholder”. Pakistan’s induction into the Shanghai Cooperation Organization as a full member will be a step in this direction.

The “great game” in Central Asia, which has been dormant for a while, is showing signs of picking up. A commentary in the People’s Daily on Wednesday gave an interesting twist to the tale by assessing that if Obama chooses to wind down the Afghan war, it will be “not only in order to rebuild America’s economy and improve its international standing, but also to recalibrate US foreign policy toward an Asia-Pacific future.”

It said Obama believes that the future of the global order will be determined in the Asia-Pacific and, therefore, America has to “make this leap” by winding down the Afghan war so as to “marshal the resources and intellectual energy for the Asia-Pacific century.” The People’s Daily candidly admitted that “China, as a regional power, with its steady rise in strength and influence, is attracting more than others” of the US’ attention.

The regional powers – Russia and China, in particular – will be making a serious mistake if they abandon Pakistan as a plaything of the US, which has been singularly responsible for destabilising Pakistan during the past decade. No matter the sense of urgency in the US about a drawdown of troops from Afghanistan, Washington is determined to retain its military presence in the Central Asian region. There is a strong possibility that the US will contrive to bring the so-called “Arab Spring” into the Central Asian steppes so as to force regime changes in the countries of the region and expand the influence of the US and North Atlantic Treaty Organization in the region.

Pakistan’s role is pivotal to the US geo-strategy. On the contrary, it is only through strengthening Pakistan and providing space for Pakistan to ward off the US pressures that a genuine break from the flow of history in this part of the world as it has known through the past 6 decades can be realised and the peace dividends of the post-Cold war era can be garnered. At the very minimum, the present defining moment should be seized to ensure that the region does not lapse back into the past trajectory of its tragic history.

A genuine stabilisation of the Afghan situation and the creation of an external environment for Central Asia’s peaceful development will critically depend on the course Pakistan takes in the near term. Evidently, the onus lies on Russia and China to encourage Pakistan to be an “authentic” power in the region. Zardari’s visit to Moscow becomes a historic occasion.

Melkulangara BHADRAKUMAR is a former career diplomat in the Indian Foreign Service. Devoted much of his 3-decade long career to the Pakistan, Afghanistan and Iran desks in the Ministry of External Affairs and in assignments on the territory of the former Soviet Union. After leaving the diplomatic service, took to writing and contribute to The Asia Times, The Hindu and Deccan Herald. Lives in New Delhi.

The article was first published on www.strategic-culture.org