A taste of India in Moscow 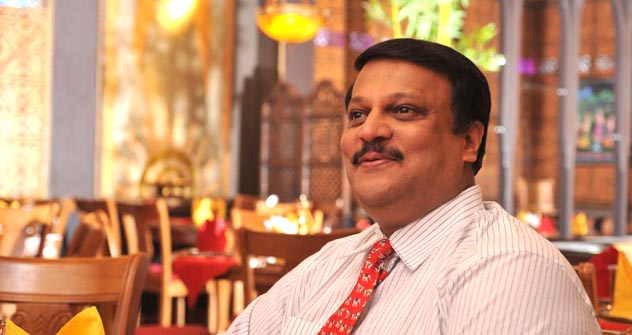 Hillary D’Souza, director of Khajuraho, an Indian restaurant in Moscow, is confident that the Indian cuisine will tickle more Russian palates in days to come.

How did you come to Russia? And how did you get into the food business?

I started my career in United Arab Emirates. I have worked in major hotel chains around the world in positions ranging from restaurant manager to the food and beverage executive. I studied hotel and restaurant management at the American Hotel and Motel Association, which had a branch in the Gulf. In 1993 I got an opportunity to come to Russia to open one of the Chinese restaurants (it was named China Garden). My second project was the Indian restaurant, Maharaja. Since then I have lived in Moscow, setting up different restaurants for different organisations as per the requirement and handling it from the inception to the marketing.

For the last eight years, I have been associated with Khajuraho, the brand owned by Stork Group companies. The group has business interests in minerals, metals and heavy engineering goods trading, but our boss Dr. J.S.Raghav is a very energetic and optimistic business personality.  He was looking to expand his business interests in the area of hospitality and service industry. That is how we've started this restaurant. We wanted to do something unique. One day, we were sitting with our boss and discussing various things, and then we came up with this idea of launching a restaurant. The word Khajuraho was new to Russia, and sounded exotic. It refers to the temple of love, people used to be happy there in all aspects of their life. That’s why we serve very healthy food, which brings much relish and pleasure to our guests.

What was your marketing strategy? How did you advertise the restaurant?

The market is very competitive; you have to look after quality if you want to reach the top. We hardly advertised, but people know us very well. Whoever comes to us, they come back again. We believe in advertisement by word-of-mouth. Locals don't trust advertising in newspapers. "You told me, I believe you," works much better. In the beginning we advertised in Russian newspapers and in English monthly magazines. We also had 3-4 cooking demonstrations on TV. And of course, we’ve got a website, which is getting popular now. It’s the best media for promotion.

Russians are used to personal helpings. The Indian way of serving dishes is completely different. Do you explain to your guests the right way of eating Indian food?

Initially, we had some problems. We used to tell people how to eat and what to order. We explained that the curry goes with the rice. If you mix it, it tastes better. But after all, it's guests wish. We could only show them the right way of eating our dishes. We don’t try to change their attitudes. A few months after opening the restaurant, we needed to change the menu to suit guests’ wishes. In the beginning we served only typical Indian dishes. But then we had to follow the local community. They were coming to us and saying: “We, people, are used to have salads, we are used to having soups…", so we've decided to include these courses in our menu. We also changed the interiors; it’s more colorful now because India is associated with bright vibrant colours.

Are all the key jobs given to Indians?

When you come to a new country, it's much better to use locals. First of all, foreigners are more expensive. Secondly, it's difficult for them to work because of language problems. Instead of bringing a person from India and trying to train him, it's better to find someone here, who can do the same job. Out of 30 employees, we have only four Indians; the rest are Russians.

In production – yes, we use Indians. For example, locals are not familiar with tandoor, so we have an Indian there. In the ‘curry section,’ Russians and Indians work together. In administration - when you open an Indian restaurant, you should look for an Indian. It would be not appropriate  if someone from any other nationality representing the ethnic cuisine.

You’ve opened restaurants in Mongolia and the Gulf countries. Could you compare these markets?

In every country there are some special difficulties. I like Russia more; the market is very good here. People like exotic food. That's why they are interested in ethnic cuisine, especially Indian, because our countries have been friends for a very long time ,we always engaged each other with business or tourism. The rules of operating documents, getting permissions, these routine procedures differ from country to country. In Russia, if you know the proper procedures and the concerned departments, you can get permissions quite quickly.

Have you been affected by the global crisis?

Honestly speaking, we were not affected. Maybe we had 15% less guests. At the same time we've opened another restaurant in Ural (Verkhnaya Solda town). First, we thought it was a mistake, but now we see it was a good idea. That’s why we're looking forward to opening more restaurants in regions. We have plans to open one in Yekaterinburg. Last week I went there looking for a place. And we are looking for a place in Perm as well.

Are there opportunities to open more Indian restaurants in Moscow?

Of course, there are. You see, Moscow is a very interesting and encouraging  city for doing business here, but there are not many Indian restaurants. Just compare it, for example, to Ulaan Bator: there are 1.2 million people, and they’ve got 6 Indian restaurants in the city. In Moscow the population is 11.5 million, the international community is very huge, lots of foreigners come here. But there are only around 10 Indian restaurants in Moscow.  Basically, people in Russia like Indian food. Around 70% guests, who come to our restaurant are Russian. Only 30% are foreigners and Indians.

What is your advice to Indian businessmen who may be interested in opening a restaurant in Russia?

They are most welcome. They need to look for a proper location and proper environment; otherwise the place won’t be as successful as it might be.

How do you look at the prospects of opening Russian restaurant in India?

Nowadays people are very obsessed by the idea of healthy food. I find Russian soups very healthy. In big cities like Delhi or Mumbai people look for authentic cuisine, and I'm sure they might be interested in Russian cuisine. However, I haven't heard about any Russian restaurants in India yet.

When did you learn Russian?

When I came here, I didn't know a single word of Russian. Whatever I learnt, I learnt while working. I worked with the Russian people, I talked to them and tried to understand them. I didn't take any course, didn’t have any teachers. Writing is a problem for me, but I can read and speak.

What’s your daily life in Moscow like? Do you have a family here?

Yes, I have a family, my wife is from the Philippines. I met her in the Gulf. My son was born here, now he goes to the Embassy School. He speaks Russian. We go out very often. Of course, we have a vehicle, but we can also easily move around using metro. My wife speaks a little bit Russian too, so it's not a problem for us going to a cinema or to a theatre. It was tough in the beginning, but now I’m used to the place and weather.

Read more on the topic  It's boom time for food business