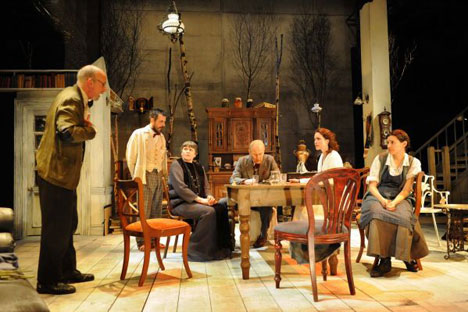 The recently-relocated Arcola Theatre in Dalston hosts a compelling production of “Uncle Vanya” until June 4th.

New stagings of the playright's work throughout London reinforce the relevance of his work for today's audiences.

What would the great Russian writer Anton Chekhov, make of 21st century Britain? How would he respond to fashion designers, Internet gurus, hip-hop stars and uber-trendy restaurateurs? Dramatist Dan Rebellato, playfully poses these questions in his exhilarating satire, “Chekhov in Hell” at London’s Soho Theatre.

This show is just one of several Chekhov-related events in London at the moment, from lectures at Pushkin House to performances in the Lord Stanley pub in Camden. In early May, Harvey Pitcher, author of “Responding to Chekhov,” gave a lecture on different types of comedy in Chekhov’s writing. In July, the National Theatre is running a workshop on how Stanislavsky’s naturalistic style of acting spread across the world, and Chekhov biographer, Rosamund Bartlett, currently leading a tour of the Crimean peninsula, will explore how far he is “A Man for our Time.”

What is it that makes a 19th century Russian writer seem so relevant in modern Britain? In an interview with “Theatre Voice,” Rebellato explained that what drew him to Chekhov as an observer of the modern world was his capacity to listen to his characters without judging them: “He sits back and lets them talk nonsense,” said Rebellato in the interview. The characters that Rebellato’s Chekhov meets, in a series of pacey, tour de force sketches, use contemporary slang, jargon and media-speak that leave the playwright baffled.

There are several more serious and moving episodes in this essentially comic piece of original theater. The talented, young cast handle them superbly. The versatile Ruth Everett spirals into existential angst as the superficial documentary producer, Jessica: “Because how deep in the soul has this darkness got?” Later, as a trafficked Ukranian prostitute, Irina, she insouciantly summarizes the 20th century (in Russian) for the bewildered Chekhov, the repeated “Milliony smertyei” (millions die) resonating with the patterns of historical horror. Her speech leaves Chekhov and some of the audience in tears.

Two productions of Chekhov’s major plays opened recently in London. The National Theatre’s “Cherry Orchard” had its first night on May 10 and runs until the end of July. The recently-relocated Arcola Theatre in Dalston hosts a compelling production of “Uncle Vanya” until June 4, closely followed by a new “Seagull.”

The naturalism of the set and performances (with occasional surreal interludes) is introduced immediately in “Uncle Vanya:” A smoky, autumnal light reflects off the samovar, antique furniture and real silver birch trees. Every time the characters eat and drink – black bread and cheese, vodka or tea—they really do it. Helena Kaut-Howson’s new translation also adds to the textured realism, making the play sound fresh, although the setting is historical, producing dialogue so real you want to join in.

Doctor Astrov’s eco-evangelism, mourning the “wonderful landscapes disappearing forever” seems—of course—more relevant every day, especially in a theater aiming ambitiously for carbon neutrality. The comic moments enliven the atmosphere of vodka-soaked futility. The parasitical neighbor, Telegin, is particularly funny in the deliberate archaism of his refrain about his wife “running off with her paramour on our wedding night.”

Translator and director, Kaut-Howson comments: “Our English theater sometimes seems in danger of treating Chekhov with a fossilizing reverence.” This approach is more to do with “nostalgia for the past – for a lost world of genteel country estates, white linen suits and wistful ineffectuality” than “the real world of Chekhov.”

Is the British image of Chekhov a reflection of our own sense of fading cultural legacies? BBC broadcaster Seva Novgorodtsev said, in a recent discussion about Russian immigration to London: “Chekhov holds such an appeal in the UK because the British are nostalgic for their own lost “Cherry Orchard.”” Michael Frayn’s introduction to his reinterpretation of the plays complained: “An impression lingers that the plays are about impoverished gentry with nothing to do all day.” On the contrary, he says, the plays are mostly about ordinary people who work – as Chekhov did; he was a doctor.

The National Theatre’s “Cherry Orchard” claims, like so many modern productions, to have cast out the Chekhovian stereotypes and be a gritty, energetic reworking of the play. “If anyone asks for a linen suit or a parasol in this play,” insists director, Howard Davies, “they have to buy a round of drinks.” He compares post-emancipation Russia (somewhat awkwardly) with modern Britain: “Russian landowners… were facing hard times… it’s just like now – everywhere you go, the cuts are beginning to hurt.”

Designer Bunny Christie, with characteristic exactness, has set the play in 1905, the year after its actual premier and Chekhov’s death. This allows for fabulously elegant costumes and also, as Davies says, “dodgy wiring” and “a telephone. Russia was industrializing a hundred year later than England.” The electric lights coexist with atmospheric candles and oil lamps.

The insistence that the play is set in the industrial early 20th century does not actually seem to make a huge difference except that the telephone—which only rings twice, at the start and the end—undermines the idea that for the old family retainer, Firs, being left behind and locked in the house is a death sentence. This may be why the first-night audience were inclined to laugh when the forgotten servant appeared after the rest of the cast had left, causing one incensed Chekhov-fan to call out “it’s not funny!”

Whether or not the Cherry Orchard as a whole is a comedy has been the subject of more than a century of debate. Chekhov himself described it as “cheerful and frivolous,” but Stanislavsky, who directed the premier, disagreed: “it’s a tragedy… I wept like a woman.”

The National’s production has its comic moments, mostly inspired by the sudden shifts of register in Andrew Upton’s version of the play. On one level, this is in keeping with the disjunction between the characters. The businessman, Lopakhin, and the revolutionary student, Trofimov, do indeed belong to different worlds from the feudal Gayevs, whose carefree gentility cannot ultimately survive much beyond the abolition of serfdom. But for a production where every detail of the design is strictly in keeping with the period, it is odd (although amusing) to hear Lopakhin say “oh, bollocks” as he struggles with his shoes or tell the family:  “Listen up! I guarantee you 25, 30 K” from “seasonal rental income.” Conleth Hill’s volatile performance as Lopakhin is full of conviction though, in a play that otherwise seems curiously empty.

In both productions, there is a suitably Chekhovian sense of ambivalence about the characters. Just as Hill’s Lopakhin veers from fumbling devotion to fury in seconds, so audiences are flung between different, deliberately coexisting interpretations. Is Vanya’s neurotic, overworked niece, Sonya more or less annoying than bored and beautiful Yelena? Is the Cherry Orchard, as Ranevskaya sees it a symbol of …“life…youth…happiness” or, as Trofimov would have it, an anachronism, rooted in the possession of living souls.

Rebellato summarises the playwright’s lasting appeal: “Chekhov is rightly admired for the complexity of his characters and the extraordinary elegance of his narratives, but beneath that it's the dark, dark irony and pitiless gaze that make him truly our contemporary.”