It's boom time for food business 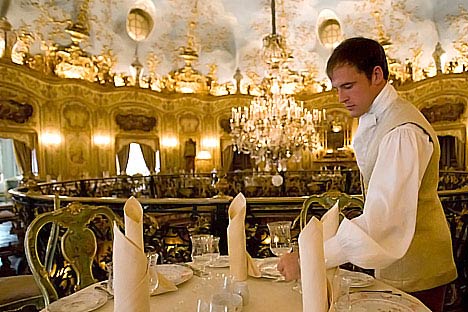 Moscow's Varvary restaurant has made it to the S.Pellegrino World's Top 50 Restaurants list this year, which is a huge step forward for restaurants and food appreciation in Russia. Source: Reuters/Vostock Photo

The Russian restaurant company WorldWide Papa’s Plc recently raised $14.5 million on the Frankfurt Stock Exchange. The franchisees of the American company Papa John’s operate in St. Petersburg and consist of only four pizzerias. Upbeat about the Russian market, the owners of the chain, using the money garnered in the IPO, are planning to open 40 new stores in the next four years.

Restaurant consulting agency RestCon also believes the food services market in Russia could reach the pre-financial crisis levels in late 2011. “Prior to the crisis, we were seeing a 25% increase annually,” says RestCon analyst Andrei Petrakov. “Today, the market isn’t growing as rapidly, but it’s still substantial at roughly 15% per year.” The financial reports of Rosinter and GMR, two of the biggest Russian restaurant companies, indicate revenue was up 17%–20% in 2010.

Foreign companies are not averse to working in the burgeoning market either. According to media reports, designer Roberto Cavalli plans to turn the legendary restaurant Praga in the very heart of Moscow into a club for young people and name it after himself. Plans have already been confirmed for a Cavalli Club in St Petersburg in November 2011.

Restaurant services are also on an upswing. Varvary (Barbarians) on Strastnoi Bulvar in Moscow was among the recipients of the international award S. Pellegrino World's 50 Best Restaurants for the first time this year. It is considered one of the first Russian gourmet restaurants and treats guests to molecular cuisine. The format of inexpensive, “democratic” restaurants, including fast food and free flow, is one of the most successful sectors of the restaurant business in Russia. During the crisis, sales fell only 1%–2% compared to a 15% decrease in the most expensive sectors.

This year, companies like Wendy’s, the main competitor to McDonald’s, Burger King, Mr. Sandy, Johnny Rockets and Country Chicken, are planning to start working in Russia.

Franchising is the standard route most transnational companies take to develop their business in Russia.

In the case of WorldWide Papa’s Plc, franchises cover the northern part of Moscow, while the master franchise belongs to the company 4 Papas. Burger King recently signed a franchising agreement last year with the Russian company Ginza Project, which will develop Burger King stores in the Russian regions. In Moscow, Burger Rus LLC owns the rights to this brand and has already opened ten restaurants in the capital.

Companies like McDonald’s, Subway and Starbucks also prefer the franchising system. Armed with its franchisees Donuts Project LLC, Dunkin’ Donuts is planning to build up a chain of 50 coffee shops in Moscow over the next few years. The value of the franchises and the royalties fluctuate from brand to brand and from region to region. Around 300,000 people order food from restaurants in Moscow every day, says Sara Bener, Burger King's general director. “The number of such people will double in 2011,” she predicts.

Read more on the topic  A taste of India in Moscow